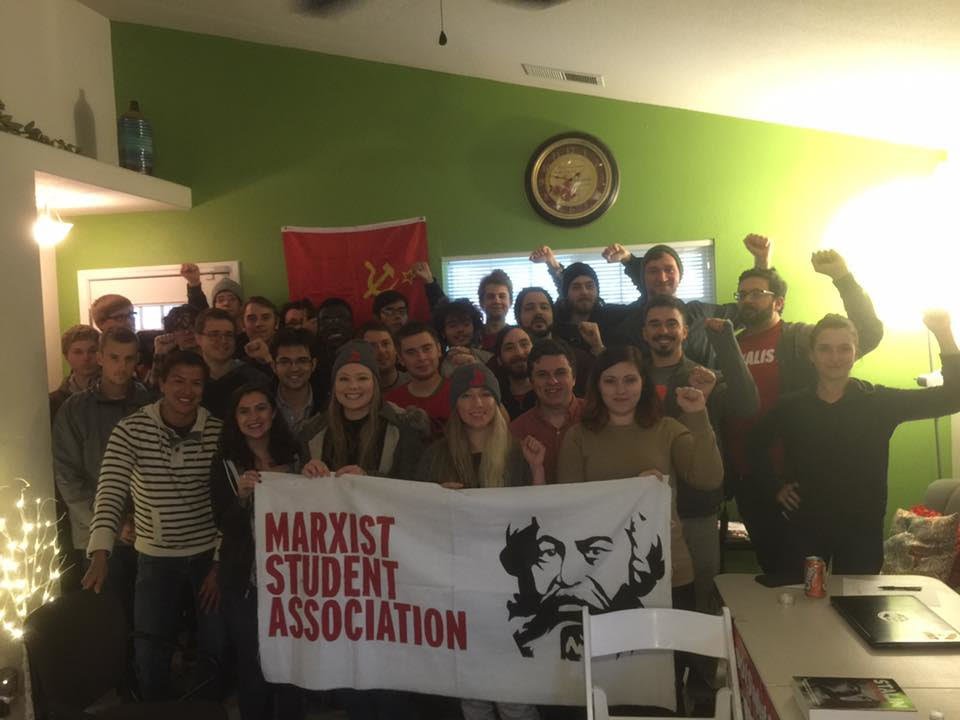 On the weekend of November 19–20, nearly 30 comrades gathered in Chico, California for the fourth annual Regional Marxist School – an important new milestone for the building of the IMT in the West Coast region.

With delegations from Southern California, the Bay Area, and a sizeable contingent from Reno, Nevada, this school was easily the best in terms of both numbers of attendees and regional representation. The attendance of comrades from the National Center in New York City, a visiting comrade from Toronto, and many local comrades and contacts served to maximize the benefit of the discussions. The topics framed the school around the need to distill political lessons from past historical phenomena—a key tool in the building of Marxist cadre, and an important take-away in a region with so many newly-established branches beginning to grow.

The day started off with a discussion on World Perspectives led off by Antonio Balmer, formerly of the Chico branch and now in New York City, which set the tone of the school by placing it in the context of the impasse of the capitalist system globally, and by focusing a sharp lens on the political and social convulsions that these crises have wrought. Those interested can read the first part of the IMT’s 2016 World Perspectives here.

Comrades came in on this discussion to highlight many important points: as in the case of Donald Trump, the rise of reactionary figures and parties is largely the result of the failure of workers’ leadership in the United States and elsewhere to provide a class-struggle alternative to austerity and the status-quo. Indicators like the dramatic fall in US exports and imports (plummeting over $670 billion since the start of 2015) and five consecutive quarters of falling corporate profits, among others, point to another major economic slump in the near future. Under such circumstances, the combination of the most unpopular administration in modern history with the need for the ruling class to implement austerity and pass the burden of the crisis onto the working class present a recipe for explosive class struggle. It is clear that we must work to build a strong Marxist organization in order to be ready for the even more dramatic shifts in society that lay ahead of us.

The second discussion was led off by K. Khan from Oakland, who gave an overview of the Colonial Revolution. Drawing on Ted Grant’s analysis of these revolutions and the theoretical tools laid out by Trotsky and Lenin for understanding imperialism and the development of capitalism in economically backwards countries, comrades were able to raise their political level by examining how revolutions during the 20th century in the so-called “Third World” continue to shape global politics, economics, and the struggle of the world working class. What was true in Cuba, China, Syria, Ethiopia, and the other countries that overthrew decrepit dictatorships and the stranglehold of imperialism is still true today.

To quote Ted Grant: “The world crisis of capitalism hits the backward regions of the world even harder, and impels them to draw the conclusion that capitalism offers no way forward.” On this basis, comrades are optimistic that with the training of a new layer of cadre we can avoid the mistakes of the past and establish the revolutionary leadership of the future.

The final discussion was on the National Question introduced by Farshad Azadian, a comrade from the Canadian section of the IMT, Fightback. With many parallels to the discussion on the Colonial Revolution, comrades were able to sharpen their focus on why national liberation and basic democratic struggles must go beyond the constraints of capitalism and fight for socialism. In a world carved up by imperialism, capitalism simply cannot solve the fundamental problems of the workers in these countries.

Marxists always stand for that which increases the unity, consciousness, and living standards of the working class, while never fostering illusions in the capitalist system, which is incapable of guaranteeing basic democratic rights and freedoms to the workers of any country. Due to this, the question of whether or not we support the formation of new independent nations is always subordinated to the class question, and the fact that only international socialism can provide “the right of all nations to self-determination.” The words of the Irish Marxist James Connolly were quoted more than once during the session:

“If you remove the English army tomorrow and hoist the green flag over Dublin Castle, unless you set about the organization of the Socialist Republic your efforts would be in vain. England would still rule you. She would rule you through her capitalists, through her landlords, through her financiers, through the whole array of commercial and individualist institutions she has planted in this country and watered with the tears of our mothers and the blood of our martyrs.”

Among contemporary topics discussed in this vein were the Scottish independence referendum, the European Union, the struggle of the Kurds in Syria and Turkey, and the situation in Québec.

These quality discussions were made possible in large part by the well-executed logistics of the Chico comrades who hosted the school. Despite having been totally rained out of the original venue for the school, comrades were able to flexibly adapt and a new location was found at the last minute. Everyone was provided with lunch and dinner, coffee throughout the day, drinks for sale to boost the local fighting fund, and there were ample discussions into the night at the social following the day’s sessions.

While events like the California Regional School aim primarily at raising the level of theory and political training of comrades within a region, they also play an important role in the building of new branches in important areas throughout the country. To this end, after the school, a group of comrades made the long road trip down to Los Angeles from Chico to meet with IMT members in Southern California.

Meeting in the colorful space of Meltdown Comics in West Hollywood, comrades held a public meeting on the crisis of capitalism and the fight against Trump. With a table at the venue stocked with materials, and the lively, thoughtful intervention of comrades and contacts in the discussion, we were able to sell some political literature and discuss with a number of promising people who are eager to learn more about the work we are opening up in Southern California.

The school and visit to Los Angeles were both a great success. Comrades were happy for the opportunity to swap stories, share political experience, and with the big boost in morale, to lay the groundwork for another, even more successful year of growing the forces of Marxism on the West coast and beyond.