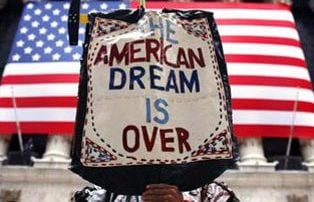 For several decades after World War II, if you worked hard, you had a pretty good chance at “getting ahead.” The system could afford a few concessions, wage increases, retirement and health care benefits for a significant portion of society. Organized labor, after the bitter struggles of the past, was able to improve the quality of life for all American workers, not just those in unions.

But capitalism has hit a brick wall. The American Dream, which had a material, economic base, is over. We were told that a 1929-style crisis couldn’t happen again. We saw what happened in the last few years. The corporations that received the mega bailouts are thriving, but the vast majority of us are struggling just to make ends meet. The economy would need to create over 10 million jobs just to catch up with where we were before the recession. That’s not happening any time soon. In fact, there are more layoffs in the pipeline, and public sector workers, who formerly had a certain degree of job security, are now under the gun.

It has been said that ideals and lofty words are one thing, but budgets are another. The budget priorities of a party or politician reflect their real interests. Most people understand that the Republicans have an aggressive anti-worker policy. In reaction to this, many look to the Democrats as an alternative. But are their proposals a real alternative?

The Republicans propose $4.4 trillion in cuts. Obama instead proposes “only” $4 trillion in cuts. This is like asking whether you want to have ten teeth knocked out of your mouth or just nine. Given those choices, no wonder many workers are resigned to the Democrats’ proposals! But we have to ask: why isn’t there an option to keep all of your teeth?

Both parties have put schools, Medicaid, Medicare, and Social Security on the chopping block. As Obama put it, “Any serious plan to tackle our deficit will require us to put everything on the table.” In other words, anything goes when it comes to stripping away the hard-fought gains of the working class over the past century.

We are told there is no money to continue these programs. And yet Wall Street profits soared to $426.5 billion last quarter and companies like General Electric, which had profits of $14.2 billion in 2010, paid zero taxes last year. And there is no mention of the fact that the entire deficit can be traced to the wars in Iraq and Afghanistan and the 2008 bailout of the rich.

Both the Republicans and Democrats say we need “shared sacrifice.” Well, we have sacrificed plenty already: millions of jobs destroyed, wages cut, homes lost, savings wiped out, and families torn apart, while CEO pay is again at record levels. The rich and their bought-and-paid-for politicians caused this crisis, and now the workers are supposed to pay for it. We say: make the rich pay for the crisis!

The bosses don’t create any wealth; they just siphon it off, move it around, and speculate it on the stock market. They “earn” their wealth by virtue of having a piece of paper that says they own shares in this or that factory, rental property, bank, or tract of land. There are countless laws on the books to ensure this remains the case, not to mention police, courts and prisons.

When you go to work, you create wealth. This wealth can either go into your pocket, in the form of higher wages, better working conditions, paid vacation, retirement benefits, health care coverage and so on, or it can go into the bosses’ pocket in the form of higher profits, rent, mortgage payments, and interest payments to the banks. So the more you take home in wages through collective bargaining, strikes and other job actions, the less profits there are for the bosses. And the more they can squeeze out of you during the work day through cuts, speedups and layoffs—which means fewer workers doing more work—the more of this wealth they get to keep.

In short, the class struggle is the struggle over the surplus wealth created by the working class. This struggle has been going on for centuries. Sometimes it is more out in the open, other times it simmers just beneath the surface. But it is always going on. And right now there is a more or less one-sided class war being waged against the workers by the bosses.

These attacks are not the result of the “bad will” of this or that politician or leader. They are the necessary consequence of the systemic crisis of the system. The capitalists seek to impose a “new normality” of a lower quality of life on the workers. This is the real meaning of the budget.

There is another way. Workers can fight back and win! Both in our unions and in politics, we need class-independent policies that start from the premise that the interests of the bosses and the workers are diametrically opposed. But there are no shortcuts to building a genuine mass political alternative for the working class. Mass forces simply will not arise out of small forces. Cobbling together several tiny groups is not going to magically transform into a mass force.

To build a truly mass workers’ party in this country we need the participation of at least several major unions. It is only out of the unions that a party truly able to challenge the power of Big Business can emerge. The labor leaders must show the way by breaking with the bosses’ parties once and for all and building a mass party of Labor.