A Review of Jared Diamond’s “Guns, Germs and Steel” 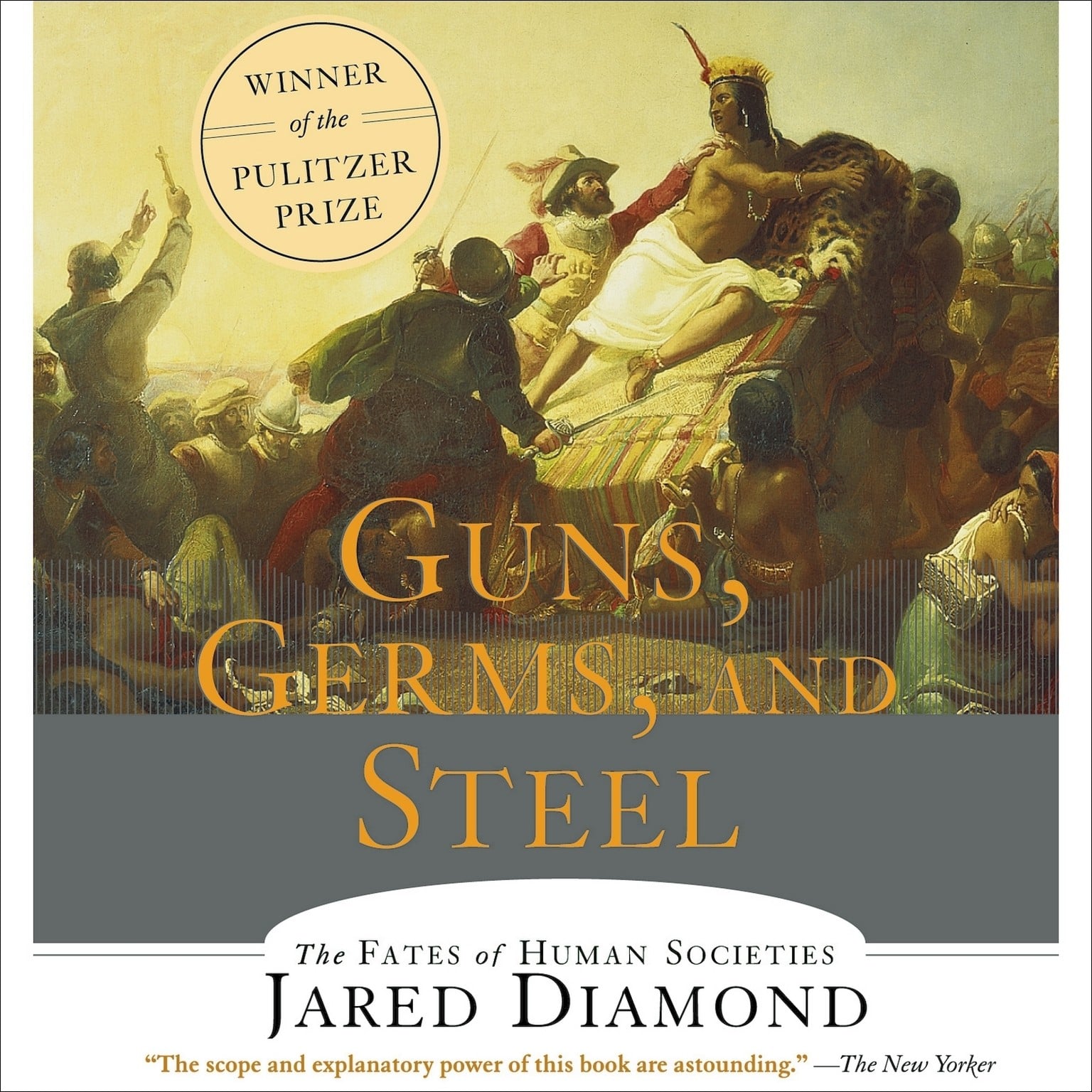 Historical materialism is a dynamic method for understanding the complex and contradictory past, with profound implications for our understanding of the world and the class struggle today. For Marxists, history is not something dead and buried, an ossified collection of facts and interpretations established for all time, but a living treasure trove of lessons for the present and the future. Even without consciously applying the Marxist method, many of the most intellectually honest and critical scientists and historians are independently drawing conclusions similar to those of the Marxists. We publish below an expanded and slightly revised version of a 1993 review of Jared Diamond’s best-known work, originally printed in the British Socialist Appeal, in the days before it had a presence on the internet.

Taking a multidisciplinary approach, Diamond’s main theme is that domination of the world by Eurasian civilization is ultimately the result, not of racial differences, but of long-term geographical and biogeographical factors. His basic thesis is convincing and full of fascinating details.

For instance, the availability of wild plants and animals suitable for domestication varies greatly from one part of the world to another. Though there are many species of large mammals native to sub-Saharan Africa, none of them are suitable for domestication. Large American mammals, having evolved without humans, were nearly all rapidly wiped out when people arrived, either though predation or habitat loss. So there were few to choose from to domesticate and in fact only one proved suitable, the llama/alpaca, actually two domestic breeds of the same wild animal, the guanaco, one bred as a pack animal, the other for wool. With the exception of maize (“corn”), none of the large-seeded grains that are suitable for domestication are native to the Americas. And maize took thousands of years to develop as a crop because it is radically different from teosinte, its wild ancestor, in several ways.

The main East/West axis of Eurasia made the spread of domesticated crops and technology easier in general due to extensive contiguous zones at the same latitude, and hence climate. All the main Eurasian domestic crops were developed in the two small areas of Western Asia and China, where their wild ancestors were native, and then spread to the rest of Eurasia. Eurasian crops never made it across the desert and the jungle to temperate Southern Africa till the Dutch brought them there in oceangoing ships.

Similarly, with a couple of exceptions which took thousands of years to develop, crops domesticated in temperate North America never made it across the Mexican desert and the Amazon jungle to temperate South America and vice versa. When the Spanish arrived in the Americas, the two great states, the Aztec and Inca empires, had apparently never heard of each other, even though they were only 700 miles apart. Writing, independently developed by the Aztecs and previous Mesoamerican civilizations, never reached the Incas. Nor did the wheel, also independently developed by the Aztecs, get to the Andes, where it could have been harnessed to llamas to pull carts. In the case of the Americas, the narrowness of the isthmus of Panama and its hostile climate was an additional topographical-climactic factor discouraging the diffusion of culture.

Diamond is careful not to fall into geographical reductionism. He agrees that cultural factors are important, for example, slavery discouraging technological innovation by slave owners as such work was “beneath their dignity,” and by slaves because they had nothing to gain from it.

In fact, the Aztecs only used wheels for toys. Certainly they had no beasts of burden, but why did they not use them for things like wheelbarrows for people to carry things in, as was done in ancient China when wheels were first used there? Diamond agrees that it is difficult to find a biogeographical reason for this, so a cultural explanation is likely in that case.

China’s flat topography, two large rivers, and smooth coastline gave it a head start in the rapid diffusion of culture and technology. The first people in the region to develop agriculture and domestic animals engulfed a huge area in which most people now speak one of the 11 main Chinese dialects, whereas before, as we know from some surviving remnants, there must have been thousands of languages spoken there. By 221 CE, most of China was politically united. Until the Middle Ages, China led the world in technology.

But then, dialectically—Diamond never uses that word, though it jumps off the page in his discussion of China—China’s geographically easy avenues of trade and communication were transformed from an advantage for innovation to a disadvantage. In the 13th century, Chinese ships of exploration reached the coast of East Africa. But those voyages were ended to due to a factional struggle in Beijing between the eunuchs, who had sponsored and captained the ships, and their political opponents. The dockyards were closed, and there were no nearby rivals to the Chinese Empire to expose the folly of this abandonment of new technology.

In contrast, Christopher Columbus approached five different European potentates till eventually, he found one willing to sponsor his voyage of exploration across the Atlantic. Once the Spanish started benefiting from oceangoing ships, several other European powers followed suit. European topography is much more fragmented than China’s. Europe has a highly indented coastline with five large peninsulas that approach islands in their isolation. There are two islands large enough to assert their political independence, one of them large enough and near enough the mainland to become a major European power. There are four high mountain ranges (The Alps, Pyrenees, Carpathians, and Norwegian). Europe’s moderate level of topographical fragmentation meant its peoples were isolated enough to remain political rivals, but not isolated enough for ideas to spread in this competitive milieu. Contrast this with the minimal topographical fragmentation of China (combined with its relative isolation from other Eurasian civilizations), and the much greater isolation of different regions of the Americas, the former promoting early growth followed by stagnation, the latter inhibiting communication, and innovation.

Diamond is one of those American scientists who is, quite unconsciously it seems, converging on the ideas of historical materialism. Of course, he is not a conscious socialist, or if he is, he is keeping very quiet about it. So it is not surprising that when he looks at more recent history, say of the last few hundred years, he starts getting on to some shaky ground.

His explanation for the development of the state is in fact quite close to that of the tradition of historical materialism. In particular, he points to some factors that gave rise to the state: the exploitation of sedentary agricultural populations after wars of conquest; dispute mediation in societies with such high population densities that not everybody is related and knows everybody else. Diamond also correctly points out that as states develop, their ruling elites exploit the rest of the population due to their monopoly of armed force. He calls them “kleptocracies”—“rule by thieves.” He points to tribute and then taxation as a major mechanism of class exploitation (though “exploitation” is another one of those Marxist words that Diamond does not use).

However, the problem is that this emphasis on taxation could be taken as implying that the modern bourgeois state is not as bad as, say, the “Eastern despotisms” of the past. What Diamond really should have made clear at that point in the book is that the coercive power of the state is still necessary to support the capitalist class, even though the mechanism of exploitation is now largely economic (surplus value), rather than political (rent, tribute, taxation).

Nonetheless, his basic thesis is convincing. His book and subsequent documentary film have served to open many people’s eyes to a richer and more balanced interpretation of the past. Many people who may not at all be racists in general, nonetheless believe that the only explanation for the broad outline of history is that people of European descent must somehow be smarter than everybody else, or at least have some deep-rooted cultural advantage. But this is a position predicated on ignorance and is easily dispelled once the facts are known and analyzed from a dialectical and materialist perspective.