Al-Sisi and the Egyptian Revolution 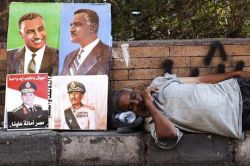 The die is cast. Abdel Fattah Al-Sisi, the commander-in-chief of the army and Egypt’s Minister of Defence, has resigned from his ministerial post and announced yesterday that he will be standing as a candidate in the presidential elections which he is likely to win.

However, what may look like a show of strength on the part of the Supreme Council of the Armed Forces (SCAF), in reality indicates that Egypt continues to be caught in the convulsions of a revolutionary crisis where neither the revolutionary forces nor the counter-revolution are able to score a decisive victory.

In spite of what the mainstream media in the West would like people to believe, Al-Sisi has enjoyed enormous popular support in Egypt for the last eight months, i.e. since he led the removal and arrest of former prime minister Morsi in July last year. After just one year of the Muslim Brotherhood (MB) being in office, the biggest mass insurrectionary movement of Egyptian history laid bare the popular rejection of the MB and Morsi’s government.

We had explained then (see Egypt: SCAF and Muslim Brotherhood ・ Two sides of reaction) that power was in reality in the hands of the masses but they were not aware of it. The movement was thus unable, for lack of a revolutionary leadership, to conquer power, overthrow the capitalist state and break it up along class lines. This led to a vacuum that was filled by the military. Al-Sisi appeared to be carrying out the popular will and ruthlessly crushed the resistance of the MB, cleared their protest camps, killing hundreds of MB supporters in a bloody repression. In reality Al-Sisi was acting, not in the interests of the masses who correctly saw in the Islamists a lethal danger to the revolution, but in order to stabilise the situation and avert an openly revolutionary movement that could have removed not just Morsi, but the whole capitalist system.

Since then the SCAF has ruled over Egypt apparently unchallenged, but the situation is far from being stabilised.

Al-Sisi is the candidate designated by the SCAF and has also declared he considers his nomination as a “mandate and an obligation.” The candidacy will be formalised by the Presidential Election Commission in a few days, along with that of Hamdeen Sabbahi, the only candidate who has announced his intention to run for president against Sisi. Sabbahi emerged as the leader of the Nasserist movement in Egypt during the anti-Mubarak struggle and has enjoyed significant popular support, but was backing Al-Sisi until recently, thus contributing to building up the myth of the new Nasser. Now he has moved into semi-opposition but his position has been weakened.

The Tamarod movement, the grassroots group which led the June mass revolutionary upheaval, is split in the middle. While one wing of its leadership has denounced the SCAF, the other has announced that they will be staging demonstrations today to celebrate Al-Sisi’s candidacy, thus revealing their complete lack of a genuine revolutionary perspective.

A campaign against terrorism launched by the military in late July 2013 was in reality the framework for this repression. The state’s iron heel has been used since then to systematically crush anti-government protests and sit-ins, regardless of the reasons why they were called.

It is not just the MB, which is officially labelled as a terrorist organisation, which has been targeted – the latest example being the sentencing to death on Tuesday of 529 MB supporters in a flawed two-day trial where defence lawyers were not even allowed to speak. Over the last few months revolutionary youth, independent journalists, dissenting academics and striking workers have also been targeted. But systematic use of repression, especially when it fails over a long period of time to prevent social unrest and instability, inevitably becomes a sign of weakness, not of strength.

By the time the revolutionary upheaval of June and July 2013 had subsided, nearly all political control rested in the hands of the SCAF. But while Morsi’s removal amidst popular support could be characterised as a victory for the military, it also shook the illusions in the feasibility of bourgeois democracy with the military as mere “neutral guarantors”, which was the main thrust of the propaganda of the liberal bourgeoisie and US imperialism. The illusions were very soon dispelled.

The SCAF is putting Al-Sisi on the spot, but why? On the US based Council on Foreign Relations an analyst asks why would the SCAF tread such a risky path, playing its most – in fact the only – authoritative card in their hands:

“In fact, although Sisi’s nomination for the presidency might have appeared inevitable or destined, one could argue that it was the SCAF’s increasing weakness and paranoia that motivated his impending candidacy. After all, given his popularity, Sisi could anoint anyone as Egypt’s next preferred president. Open elections would likely be a landslide for his chosen candidate, and the process would preserve both the vestige of procedural democracy and the SCAF’s ability to intervene. Yet the generals named Sisi, looking to him to finish off the revolution and reign in the Brotherhood’s participation in politics.

“But beyond creepy state press portrayals of Sisi痴 virility and Egyptians parading around in gold-colored Sisi masks, as many were in Tahrir Square on the third anniversary of the revolution on January 25, the junta has little upon which to build a real regime. Sisi has no economic policies or political programs to speak of.” (J. Stracher, Can a Myth Rule a Nation?)

So, what is putting such huge pressure on the SCAF? The social unrest provoked by the toxic cocktail of economic crisis, inflation and unbearable living conditions is unstoppable and resurges inevitably like magma during an eruption.

Barely three weeks ago the government of Hazem Al-Beblawi – established after the removal of Morsi – collapsed in the face of a massive strike wave, the biggest since the June 2013 movement against Morsi. It was replaced by a cabinet presided by Ibrahim Mahlab (a former member of the NDP, Mubarak’s party). In his first televised address to the nation the new prime minister appealed to the “patriotism” of Egyptians and stated that now is not the time to go on strike but to work.

Such an appeal comes across as pathetic in a situation where a crippling all-out strike by 38,000 bus drivers the previous week had just ended with a pay rise of $30 (bringing the wage of a bus driver to the still totally insufficient level of $170). During the strike the army was mobilised to provide alternative means of transport and thus break the strike, but the government had to give in to the determination of the workers. However, every time a wage demand is granted by the authorities, it is soon eroded by inflation or sometimes promises are not implemented, with the result of infuriating the workers even more. This was the case for example with the promise to introduce a $170 minimum wage, which was then implemented in such a way as to exclude a large layer of workers, who felt cheated.

How far workers are from achieving a minimum wage is shown by the fact that 40 percent of Egypt’s population live on less than $2 per day.

The strike wave affected also postal workers and a massive coordinated strike action of 45,000 textile workers around the Misr Spinning and Weaving Company in Mahalla, Egypt’s largest textile mill with over 22,000 workers. Strikes affected also the steel workers, refuse collectors and even doctors and pharmacists have joined in.

The most common demands raised, apart from wage increases, are the prosecution of corrupt officials, workers’ representation on their companies’ administrative boards, the re-opening of stalled companies and factories, and the reinstatement of sacked workers, along with the payment of overdue profit shares.

Half of the government’s budget is dedicated to servicing the debt or on subsidies (for example on fuel), but natural gas shortages are provoking daily power cuts. Grandiose plans to provide for new housing have been announced but according to the Central Agency for Public Mobilization and Statistics (CAPMAS) between 12 million and 20 million people live in informal settlements across the country.

The budget deficit is getting close to 14 percent of GDP and the billions of dollars that come in from the Gulf are producing very little impact on the lives of ordinary Egyptians.

This is the scenario that Al-Sisi will have to deal with once he is elected. No authority can last forever if the conditions of the mass of the population remain the same, and without authority the sword alone will not be enough to keep the SCAF in power. So far Al-Sisi has manoeuvered as the man of the revolution. He has managed to keep the movement down by hinting at a better future under his rule. “Once Sisi is in power, and once the Brotherhood is crushed…” has been the mantra of the SCAF. But that day is approaching fast and the stomachs of the Egyptians will still not have been filled. Then the Egyptian revolution will, once again, come to the fore.