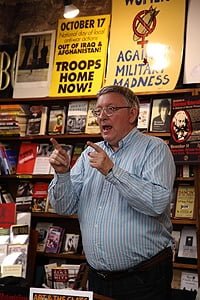 A total of 120 people came out to see Alan Woods, chief political editor of Marxist.com, speak on the final dates of his North American tour. Approximately thirty people showed up to the University of Minnesota’s Coffman Memorial Union Theater last Wednesday afternoon to hear Alan Woods discuss Venezuela, Cuba, and the Future of the Latin American Revolution. The event was sponsored by the the La Raza Student Cultural Center and the Student Marxist Association.
Alan presented a Marxist perspective of the current situation in Venezuela, including many personal recollections and insights from his travels in Latin America. He expressed the IMT’s support for Hugo Chavez, but not without qualifications. Chavez has been given many labels by the mainstream press, “dictator” being one of the more common ones. Another common libel aimed at Chavez is that his government supports the use of death squads. But these are just ways for the corporate-controlled media to undermine support for the Bolivarian revolution and to minimize Chavez’s tremendous popularity and the social gains that the Venezuelan workers and poor have accomplished in the last 14 years.
Alan Woods argued the case that to the contrary, Chavez’s measures have not been firm enough, especially when dealing with his political opponents, who were involved in a military coup that overthrew him in 2002. He explained that you cannot make half a revolution, and that in fact, the Venezuelan Revolution has not gone far enough. Even with the social gains of the misiones, the oligarchs still control much of the wealth, and the revolution remains incomplete. Chavez and the people of Venezuela must carry the revolution through to its conclusion: the banks, landed estates, and key industries must be nationalized and integrated democratically into a socialist plan of production, under workers’ control. Alan stressed the need for the masses to gain genuine political and economic control.

He also explained that here in the U.S. the only solution to the crisis of capitalism is struggle for socialism. He urged those present to get involved with the Workers International League and to counter those who get frustrated and disengaged from politics. He ended the discussion with this wise piece of advice: “You may not be interested in politics, but politics is interested in you.”
Later on that same Wednesday evening, Alan spoke on Dialectical Materialism: In Defense of Marxist Philosophy, at Mayday Books in the West Bank of Minneapolis. About forty people were in attendance, packing the small but intimate space, surrounded by revolutionary books and posters.
Alan outlined many clear arguments in making the case for dialectical materialism, starting with an analysis of the main trends of philosophical thought: idealism vs. materialism. He explained that for materialists, the material world is primary, and our thoughts are a reflection of the material world. For idealists, the material world is but a crude reflection of an ideal “form” or perfect “Absolute Idea.” He also explained many of the basic aspects of dialectical thinking, including examples of the dialectical law of the transformation of quantity into quality, and vice versa.

He was also able to demonstrate how philosophy throughout the ages has changed and developed with the changing material conditions and different stages of human society. He showed how class society has played a historically progressive role. For example, when the Egyptian priests were freed from the labor of the field directly growing food, they had time to look to the stars. This was the beginning of science. But the progressive aspects of class society ended long ago, and are now a fetter to the development of thought, culture, science, and genuine human progress.

On Thursday morning, Alan appeared on Don Olson’s “Northern Sun” radio program on KFAI in Minneapolis, to give a brief introduction on the question of Art and the Class Struggle. You can listen to his portion of the show here. That afternoon, he recorded a television program on the Crisis of Capitalism and Latin America, which will air on community television and be available online shortly.
That evening, Alan spoke to 50 people on Art and the Class Struggle at the Mixed Blood Theater in Minneapolis, managing to compress 15,000 years of human history into a one-hour introduction. A video of his presentation will be available soon.

Alan explained how art has always been a reflection of human surroundings and society, whether that be the animals in prehistoric cave paintings, the essence of Greek idealism expressed in the perfect sculptures of Aphrodite, or the decay of a today’s modern society taking the form in pointless pieces of “art” such as a shark in a tank of formaldehyde  Alan explained art’s role in human expression, and that there may not be a more human form of labor than to create art.
Afterward, people had a chance to socialize and ask Alan questions informally. Many books, booklets, and copies of Socialist Appeal were sold during the course of Alan’s events in the Twin Cities, and several hundred dollars in donations were raised as well. Reason in Revolt was especially popular, and many had their copies signed by Alan. Nearly two dozen new people signed up to learn more about the Workers International League and the struggle for socialism in the U.S. The Twin Cities comrades of the Workers International League look forward to Alan’s next visit!
Share This
November 20, 2012