One of the most pervasive myths in politics is that there is a meaningful separation between private industry and government. The reality is that under capitalism, the two are inextricably linked and are but two institutional frontiers for private wealth accumulation. Nowhere is this more apparent than in the monstrosity that is the military-industrial complex.

On June 18, amidst rising tensions with Iran, Patrick Shanahan, a former Boeing executive and acting Secretary of Defense, quietly withdrew from the confirmation process. He was replaced by Mark Esper, the Vice President of Government Relations at Raytheon, a Fortune 500 weapons manufacturer. Far from being shocking, the appointment of a former defense lobbyist to the top civilian post at the Pentagon highlights the so-called defense industry’s success in controlling the Department of Defense.

In theory, a large proportion of the federal taxes paid by ordinary workers is earmarked for “national defense.” In practice, however, this public money is seamlessly transformed into private profits, a process facilitated by a rapidly revolving door of personnel moving from one sphere to the other. As Lenin noted in Imperialism: The Highest Stage of Capitalism, “Monopoly hews a path for itself without scruple as to the means.” The ultimate result of the process of capitalist monopolization is the fusion of the state with private enterprise, with no real distinction between them. “Production becomes social, but appropriation remains private.” 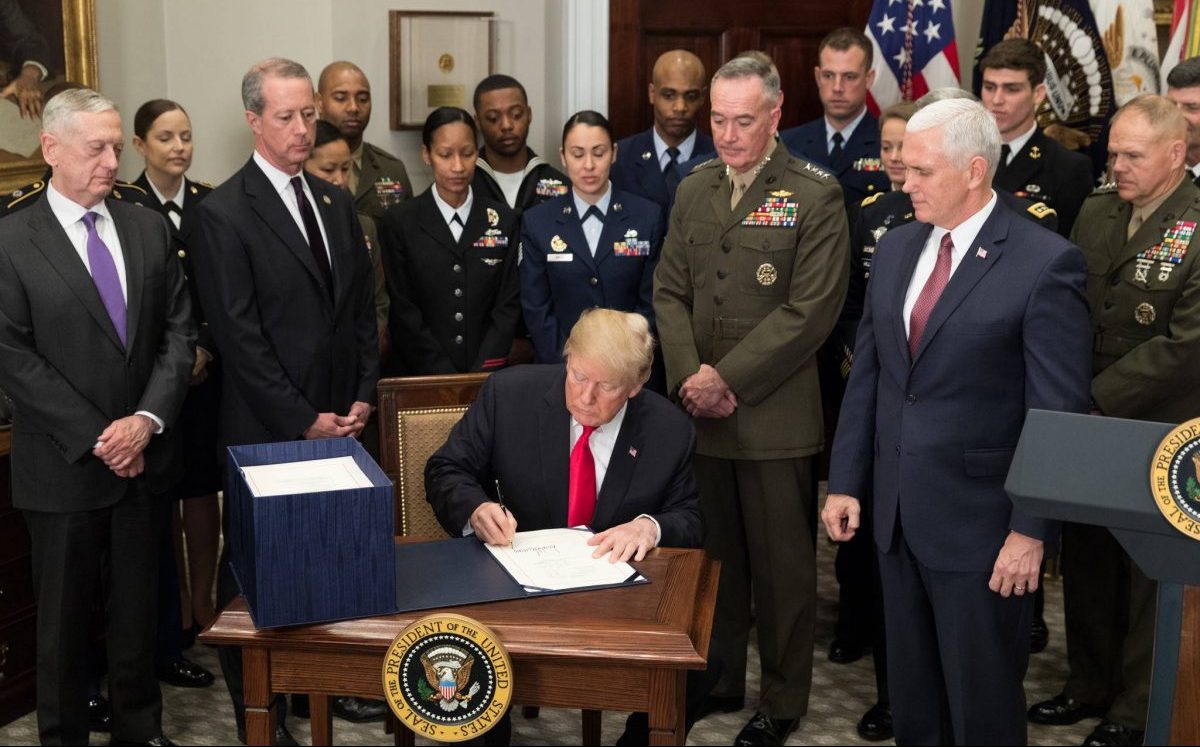 In theory, a large proportion of the federal taxes paid by ordinary workers is earmarked for “national defense.” In practice, this public money is seamlessly transformed into private profits. / Image: Public Domain

The full scope of the all-consuming leviathan emerging from the ocean of global capital cannot be fully understood without an analysis of the role of finance capital. As Lenin demonstrates in Imperialism, the big financial houses are the main drivers of the tendency towards monopolization. “The concentration of production; the monopolies arising therefrom; the merging or coalescence of the banks with industry—such is the history of the rise of finance capital and such is the content of that concept.”

As an example, the Vanguard Group, an investment firm that manages $5.2 trillion in assets, owns 10.9% of Raytheon’s stock, 10.43% of Boeing’s stock, and 9.76% of Lockheed Martin’s stock. These are the three largest defense contractors in the world. Blackrock, Inc., another investment firm, owns 11.7%, 8.83%, and 8.51% of these companies respectively. These are just two of the world’s largest financial asset management firms, and in conjunction with others like State Street Corp. and Capital World Investors, own huge shares of the defense industry. While each firm may not hold a controlling portion of a contractors’ stock, the shared incentive of seeing the stock they own increase in value binds them together in their actions as shareholders so that the effect is essentially the same. This has a direct impact on American foreign policy.

On the day the US military launched 59 Tomahawk cruise missiles at the Shayrat airbase in Syria in 2017, Raytheon’s stock value rose by 2.5%. Conversely, when US troops began “withdrawing” from Iraq in 2009, Lockheed Martin’s stock fell by 9.5% over the course of the year. The adage, “All wars are bankers’ wars” should perhaps be updated: “All wars are hedge fund managers’ wars.”

Individual members of the capitalist class benefit as well. Mark Esper was paid $1.5 million in salary during his last year at Raytheon but was granted additional stock options worth an estimated $1.5–6 million, which he still owns. It would be the height of naivety to think that the performance of his holdings will not influence his decisions as Secretary of Defense. 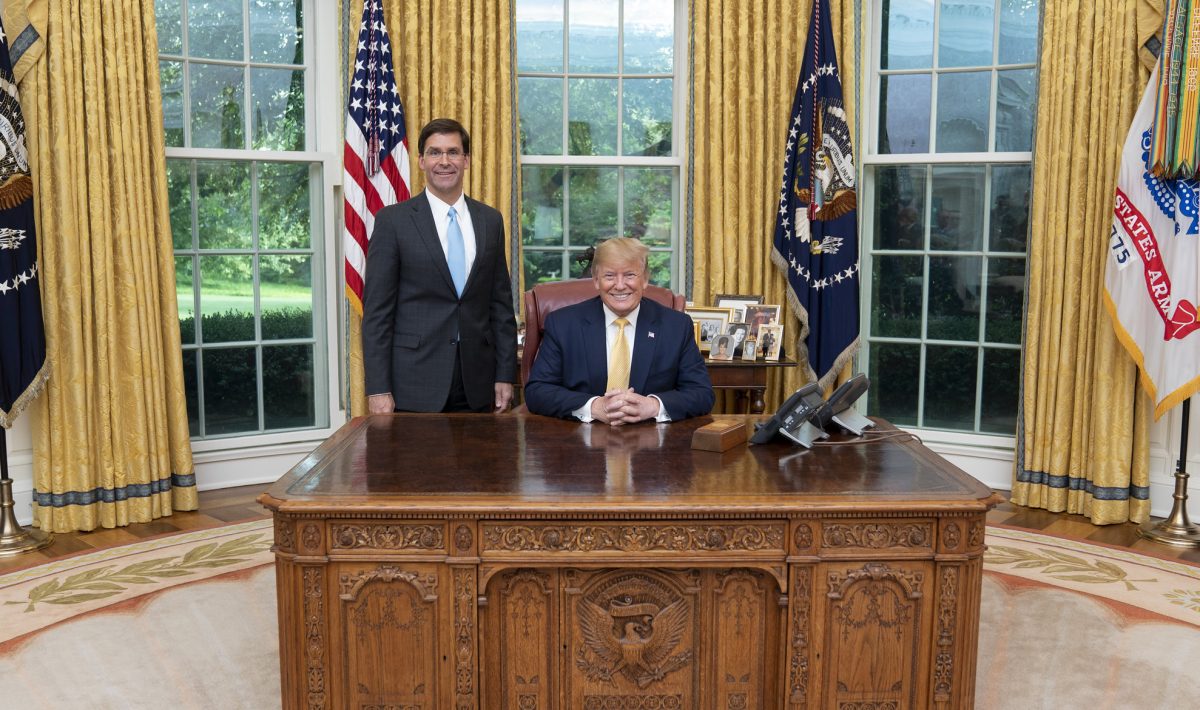 It would be the height of naivety to think that the performance of Mark Esper’s holdings will not influence his decisions as Secretary of Defense. / Image: Public Domain

The value of these holdings becomes the common interest of defense industry executives and hedge fund managers alike. It is what binds capitalists from diverse industries together with the Department of Defense, the “iron triangle” of the military-industrial complex. The triad of defense officials, defense contractors, and fund managers forms the altar upon which soldiers and civilians alike are sacrificed around the world.

Seen through the lens of class interest, many aspects of US foreign policy become crystal clear. In 2015, there were just 250 American contractors in Iraq. By 2016, that number had increased to 2,028. This coincided with a round of contracts awarded to various companies to operate in Iraq, including a $41 million aviation maintenance contract awarded to Dyncorp to service the Iraqi Air Force’s helicopter fleet. In 2011, the year that the US supposedly completed its withdrawal from Iraq, Dyncorp’s annual revenue increased by 11.3%, buoyed by Department of Defense and State Department contracts. In reality, the Iraq withdrawal was less of a de-escalation of the war than a transition to a privately fought phase of the so-called “War on Terror.”

This highlights the critical role the state plays in the military-industrial complex, a role that has changed little throughout the history of imperialism. It exists to forcefully open new markets, to provide access to these markets for domestic firms, and to create demand for the “services” provided by these firms. Just as Commodore Perry forcefully opened Edo Japan to foreign trade, so too does the modern American military forcibly open “closed” countries, such as Iraq, Afghanistan, and Syria to the depredations of global capital.

At the outbreak of World War I, Lenin reportedly responded to a pacifist who had remarked that “War is terrible!” with a quick rebuttal—“Yes, terribly profitable!” War enriches only the capitalists, and it is in their shared interest that it is perpetrated. However, it is the global working class which pays the ultimate price. The increasingly short-sighted calculations of US imperialism are symptomatic of its historical decline amid the impasse of global capitalism. While Trump’s bullying and bluster threaten to further undermine an already tenuous balance of forces in places like the Middle East, it was the line of imperialist predecessors and bipartisan policymakers before him who destabilized the region through the preceding decades of wars and invasion. 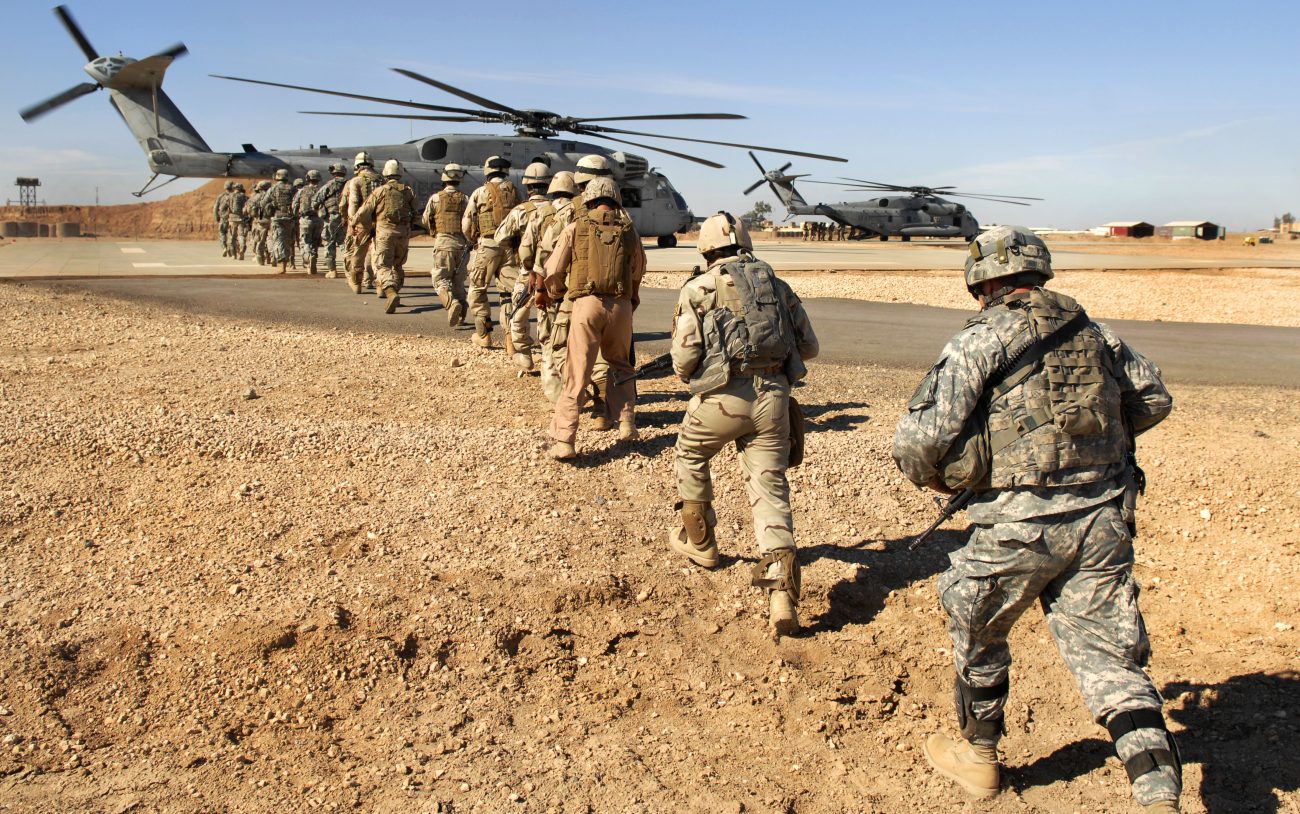 War enriches only the capitalists, and it is in their shared interest that it is perpetrated. However, it is the global working class which pays the ultimate price. / Image: Public Domain

After the collapse of the Soviet Union, the strategists of US imperialism deluded themselves into imagining that their power was limitless. Today, this is no longer the case, and the relative decline of US influence in various regions of the world is evident to all. However, this doesn’t mean that the predations of the capitalists will wind down to nothing. In fact, the convulsions of US imperialism’s “death agony” will lead to intensified suffering around the world. However, history has shown that there is a force powerful enough to stand up to imperialism and win—the united working class, armed with a revolutionary program.

In 1918, while in the throes of a desperate civil war between the newly formed workers’ government and the forces of reaction, Russia was invaded by 21 armies from 15 allied nations, including the US, all seeking to strangle the revolution and prevent Russia from defaulting on the onerous war debts imposed on her by foreign banks. From the perspective of military strength and training, it should have been a hopeless struggle. However, unlike the invading forces, the revolutionary workers in arms understood the cause they were fighting for—the defense of their livelihoods and the newly conquered control over their destinies. This moral and political conviction and the iron will and discipline of Bolshevism that flowed from it allowed them to throw out the invaders. Systematic revolutionary propaganda succeeded in provoking mutinies among the troops of every invading army. This, along with solidarity strike action in the home countries of the invading forces, allowed the nascent workers’ state to defeat the counterrevolution.

The US today has a level of wealth and productive technique that would have been unfathomable for the Russian revolutionaries a century ago. The material basis exists today for an age of peace and superabundance for all. Mass movements with revolutionary implications are erupting in one country after another—a reminder of the revolutionary nature of the epoch we’re living in. A world socialist revolution can put an end once and for all to imperialism’s bloodthirsty hunt for markets and domination, once there is a worthy leadership that can connect with these mass movements of the working class and arm them with a program for victory.