America the Great, Good, and Stupid: The Second Clinton-Trump Debate 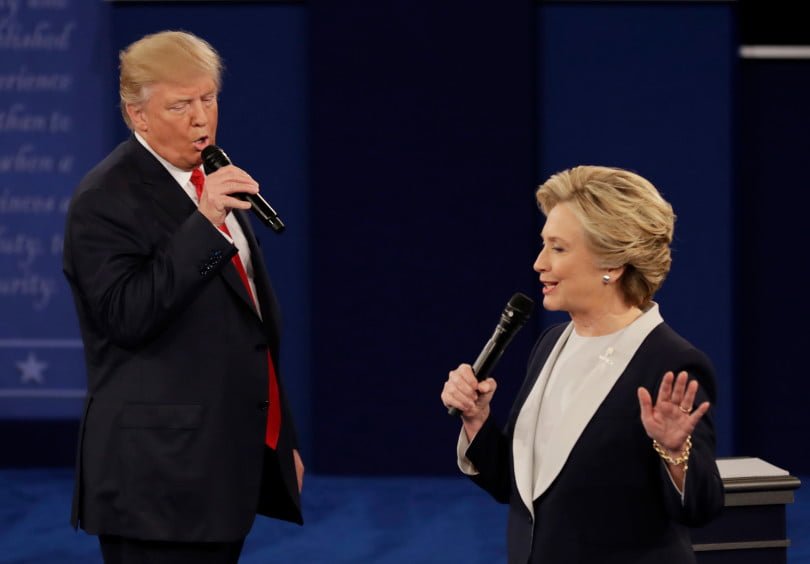 On Sunday evening, the Democratic and Republican presidential nominees met at Washington University in St. Louis, Missouri for their second televised debate. In a country besieged by killer clowns, the liberal media’s most hated buffoon and “Killary” Clinton took center stage to “debate” the issues confronting the US and the world. What followed was nothing less than a slow motion disaster—a faithful representation of the capitalist class a century after the system’s “sell by” date.

“Our country is great because it is good.”—Hillary Rodham Clinton

“How stupid is our country?”—Donald J. Trump

Millions watched in astonished amusement and horror as the cream of the crop of American politics plumbed new depths of perfidy and mediocrity. After a week of leaked videos, transcripts of speeches to Goldman Sachs, personal insults, and ever-more-tawdry accusations, there were no polite handshakes to kick off the festivities. The knives were out as the war of attrition for the world’s most powerful office enters its final month.

As in their first debate, the sympathies of the “impartial” moderators tilted clearly against Trump and for Clinton. Just days earlier, a bombshell of a video was “mysteriously” released on the eve of the debate. In the 2005 recording, Donald Trump, then merely a loudmouth celebrity, is caught on a “hot mic” uttering a series of demeaning and misogynistic remarks about women. Of course, the timing was no accident, and it was strongly hinted that far more incriminating and offensive recordings would follow.

Trump’s staying power is a mystery to those who cannot understand why his bombastic right-populism has connected with the groundswell of anger against the status quo. In response, the establishment has been tightening the screws to torpedo his campaign before he sinks the Republican Party—and possibly the US political establishment as a whole. In the wake of the recording, dozens of Trump’s Republican supporters withdrew their endorsements and pressure grew on him to quit the race altogether. These “traditional family values” rats, who boarded the USS Trump once he wrested the nomination from them, are now pouring overboard in droves, in hopes of avoiding the iceberg.

“It’s just words,” was Trump’s only defense. His repugnant comments are clearly indefensible. However, the establishment’s hypocritical astonishment at Trump’s “locker room banter” is rich coming from such shameless defenders of a system based on the exploitation and oppression of billions. These moralists daily turn a blind eye to the rampant slavery, rape, torture, humiliation, and degradation of hundreds of millions of people around the planet. Trump’s morality merely expresses the morality of capitalism: rapacious, bullying, racist, sexist, and demeaning. But it is inconvenient for ruling class attitudes such as this to be aired publicly—they are normally reserved for corporate board rooms, cabinet and war room meetings, and masked orgies at secluded mansions.

The powers that be are outraged at Trump’s outrageous behavior. But for all his crudeness and bald-faced lies, Donald Trump occasionally speaks more than a grain of truth. This is why the ruling class hates him: he is a capitalist out for himself, with no regard for his class as a whole. As a loose cannon, he threatens to expose the system’s nudity. His campaign and behavior are accelerating the destruction of the Republican Party, one of the pillars of US capitalist rule since 1860. A tenacious and dirty fighter, his policy is “rule or ruin.” If he is to go down, he’ll go swinging—and will drag Clinton and the political establishment down into the blood and filth with him.

Hours before the debate, Trump counterattacked by holding a press conference flanked by four women who accuse Hillary Clinton’s husband, Bill, of sexual abuse. During the debate, Trump hammered away on this theme: “There’s never been anybody in the history of politics in this nation that’s been so abusive to women. So you can say anyway you want to say it, but Bill Clinton was abusive to women. Hillary Clinton attacked those same women.” For his part, the former president sat in the VIP box in gaunt, stony-faced bitterness throughout the contest.

On several occasions, Trump told Clinton she should be ashamed of herself for her actions—not to mention that she should be investigated and thrown in jail. But there is no shame for these people. Bill and Hillary Clinton are proud champions of capitalism and imperialism, and will use any and all means to improve their position in relation to their rivals. Like the Underwoods in Netflix’s “House of Cards,” the Clintons’ calculated charm is only a cover for their ruthless ladder-climbing and elimination of people who get in their way.

It is no accident that Trump repeatedly invoked Bernie Sanders’s warning about Clinton’s lack of trustworthiness. “I was so surprised to see him [Bernie Sanders] sign on with the Devil [Clinton].” Sanders’s campaign injected genuine enthusiasm and excitement into what promised to be a ho-hum and demoralizing electoral season. As we have explained in more than a dozen articles, Sanders channeled the discontent of millions who are leaning to the left and searching for a way out of the crisis.

After he “lost” to Clinton—due to blatant fraud by the Clinton camp, according to a new report—the anti-establishment anger has taken even more confused and twisted forms. Gary Johnson of the right-wing Libertarians (polling at 6.5%), and Jill Stein of the Greens (polling at 2.4%), were not allowed to participate in the debates, and are not seen by most voters as viable candidates. But Sanders is another matter. He squandered his tremendous moral and political authority when he capitulated to Clinton and the DNC. Those who said we exaggerated when we said an independent Bernie Sanders campaign could actually win in a four-way race should look no further than last night’s farce for evidence that under today’s conditions, this was in fact a distinct possibility.

A week is truly an eternity in politics—especially when the century-and-a-half rule of the Democrats and Republicans is in the process of imploding. Trump may appear to be down for the count, but we should never underestimate history’s propensity to throw curve balls. If Brexit can happen, Donald Trump can be elected president of the United States. Hillary Clinton should have been a shoo-in for the nomination and the presidency, but hers has been a brutal and tortuous path. Even if she does win, she will be bruised and battered and will almost certainly be granted a limited honeymoon—especially if the next economic slump hits sooner rather than later.

The postwar capitalist order is coming apart at the seams. One after another, its institutions are succumbing to the relentless gravitational pull of the capitalist crisis. As Trump aptly put it, ”This is like medieval times.” Capitalism can no longer take us forward. The menace of genuine barbarism stalks wide swathes of the planet.

The dearth of competent capitalist leadership is ultimately a reflection of the senility of the system. The capitalist class no longer has a historical mission or purpose. This is the real meaning of the quagmire of cynicism, pessimism, and ineptitude in which they find themselves. Their political impotence is a function of their systemic inability to deal with the crisis.

Trump and Clinton are truly the best the US ruling class can come up with. Long gone are the Lincolns, FDRs, and JFKs. Who can possibly watch this train wreck and not agree that ordinary workers would do an infinitely better job at democratically running society under socialism? This is what we in the IMT are fighting for, and we invite you to join us in this struggle!