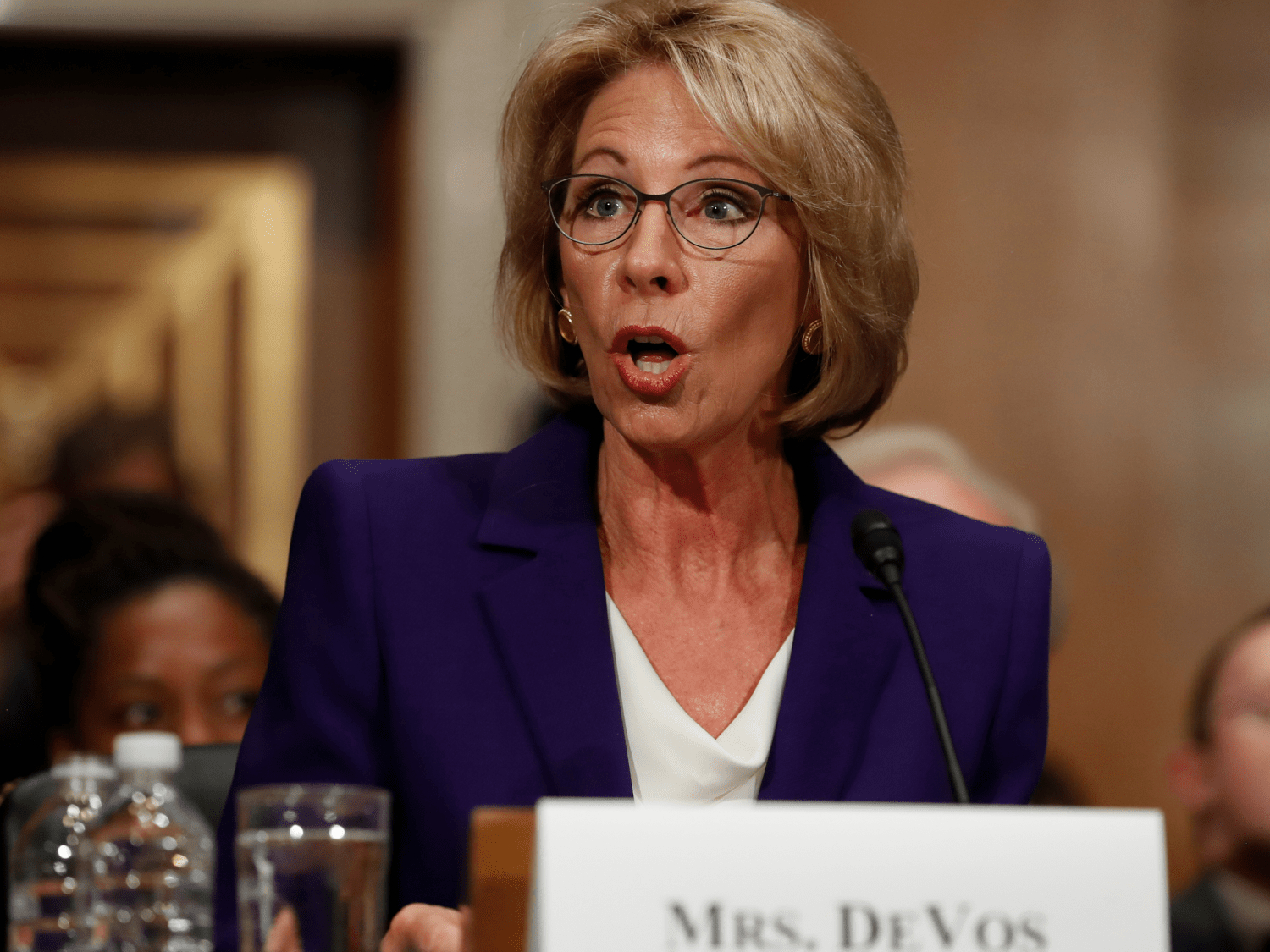 A robust system of public education is the foundation of any advanced economy, and the state of this institution is a reliable indicator of the health and values of the society in which it operates. In the ruling class’s attitude to public education, one can see the reflection of a system that has long outlived its usefulness. Capitalism cannot provide jobs, living wages, and universal healthcare for all. By the same token, it is unable to provide everyone with free, equal, quality education from pre-kindergarten through advanced university degrees. This is because profit, not people, is capitalism’s bottom line.

Engels explained that the state exists in order to maintain class rule and ensure the domination of one class over another. Whether it is the training of the children of the capitalists to perpetuate their class rule, or training workers as cogs in the profit-making machine, education is a part of maintaining the class relations of capitalist society.

After a tumultuous start to his presidency, it came as no surprise when Trump’s nominee for Secretary of Education, Betsy DeVos, faced more opposition Congress than any other cabinet appointee in history.  DeVos is one of the least qualified candidates ever nominated by a president—and that’s saying something in this epoch of capitalist decline. Even some Republicans couldn’t stomach her, so Vice President Mike Pence was forced to cast the deciding vote for the first time in the history of cabinet appointments.

DeVos is yet another ideologue with no political experience tapped for a highly influential position within the White House. Shortly after her appointment, her crass ignorance was on full display when she praised the heads of all-black schools as “pioneers” in school choice, blissfully unaware that these schools were founded at a time when black students were legally barred from attending schools with whites. Trump is delivering on his promise to “drain the swamp” by pumping in more sewage—this time at the expense of public education.

DeVos’s rise from Amway billionaire and privatization crusader to the country’s top education job is absolute proof that an education that allows each child to reach their fullest potential is not a priority under capitalism. Far from being a problem, her total lack of understanding of the public education system is seen by the most conservative elements in government as an advantage. In DeVos, they see someone who will push for the complete privatization of education, and in the process, take on the teachers’ unions, which are among the largest and most powerful in the country. Faced with an unprecedented systemic crisis, the government must ram through austerity measures and counter-reforms to take back the gains won by the workers in the past.

Education should provide students with the opportunity to explore their strengths and interests in order to maximize their individual talents.  But this is rarely the case under capitalism, even though the vast majority of teachers enter the profession hoping to do just that. In a market economy, most workers are forced to take jobs out of necessity, not because these jobs fit best with their own personal interests or strengths. Student debt and bills, combined with a lack of quality jobs, compels people to take whatever job they can get.

American capitalism’s education system perpetuates this by sending every student possible on the alleged path to “innovation and business success,” regardless of their learning styles, interests—or availability of jobs. In this one-size-fits-all approach, there is more pressure for schools to focus on STEM subjects (Science, Technology, Engineering, and Mathematics). These are certainly excellent subjects for students to study, but the motivation under capitalism is to create a workforce that is more “competitive on the global market.” By providing public funding to districts with this focus, the state sends a clear message of what is—and what is not—valued.

The United States’ waning position in the global economy is the driving force behind these policies, rather than a holistic education experience, designed to foster the strengths and abilities of every student.  Students who do not excel at these topics are neglected and put on a fast track to a lifetime of low-wage, dead-end jobs.

In a system where human health and well-being is valued well below the performance of the stock market, classes such as physical education, music, and art are cut and middle school students are required to take classes on entrepreneurship and computer coding.  Public funding is available for specialized classes for students who benefit from extra support and time at school, but only if those classes serve to channel kids into the system’s preferred fields. A wealth of academic research shows that before and after school programs that focus on physical activity bring tremendous benefits when it comes to health, behavior, and learning. However, these kinds of programs do not receive funding because they “take away” from subjects deemed more “important”—in isolation from childhood learning and development as a whole.

A look at several education-related legal cases in the state of Minnesota, which historically has had mostly “pro-education” governments, shows how even the most liberal capitalist policies in the best of conditions cannot resolve the inequities in education because there is simply no solution under capitalism.

In Skeen v. the State of Minnesota, in 1993, outer suburban and rural school districts sued the state because they did not have the tax base to effectively fund their schools. The case determined that everyone has a right to education, but that the right to education does not extend to how schools are financed, effectively leaving poorer districts to fend for themselves. This often leads to cutting staff, reducing resources for students, closing schools, and often, all of the above.

Then in 1995, the Minneapolis Chapter of the NAACP sued the State of Minnesota because segregation and concentrated poverty were still evident in schools. The state’s proposed solution was to offer greater “choice,” with students from inner city schools allowed to enroll in suburban school districts, with transportation covered Minneapolis Public Schools. But as this meant siphoning off resources from the already underfunded districts, those students who remained saw their educational quality deteriorate even further.One would think that conditions might have improved over the last twenty years, but in 2015, Alejandro Cruz-Guzman v. the State of Minnesota demonstrated the impotence of past reforms and the perpetual reality of schools under capitalism. The Plaintiff argued that schools remain segregated, unequal, and inadequate for the students of Minneapolis. This case is still in appeals, but one of the “reforms” being seriously considered is to expand charter schools—i.e., privatization.

The recently confirmed Secretary of Education is the embodiment of the charter school movement. The theory behind charter schools is that privatizing education will encourage competition, simultaneously requiring schools to perform higher or cease to exist. The reality is that charter schools and voucher programs take funding away from schools that are already underfunded, causing a further decline in many schools.

But there is no evidence demonstrating that this in any way improves districts’ performance or provides a better education for all students. What we do know, is that, in addition to putting tax dollars into the pockets of a handful of capitalists, charter schools have dramatically reduced the influence and size of teachers unions. Privatizing schools is a backdoor attempt to destroy the teachers’ unions, which are the first line of defense for quality public education.

If there is a profit to be had, private interests will try to find a way to strip whatever resources they can away from the public sector. Charter schools are correctly seen as a stepping stone towards all-out privatization and a voucher system, whereby families can use credits to attend the school of their choice—while public funding follows the student to the designated school.

Charter schools and many would-be schools funded by vouchers are publicly funded but privately run, padding the pockets of CEOs and stockholders. Such “reforms” are actually counterreforms and only serve to magnify the shortcomings of education under capitalism while funneling taxpayer dollars into the hands of a well-connected few.

Half of all teachers leave the field of education within three to five years due to deteriorating environments within schools. The solution isn’t to trash public education, but to expand it massively. Society has the resources to build more schools, reduce class sizes, and decrease teacher workload. Instead, school districts around the country continue to close buildings and lay off teachers, while class sizes increase and millions of qualified adults remain unemployed or uneducated instead of working as teachers or support staff within schools. The material conditions for a phenomenal education system exists, but capitalism does not allow teachers and the broader working class to have a real say in how education organized and what is taught.

Creativity, individual attention, personalized instruction, and every other aspect of a quality education for all will only be possible through the socialist transformation of society. Under socialism, schools would not mechanically focus on particular subjects in competition with one another over diminishing state funding. Instead of classes devoted to entrepreneurship and the creation of the next Bill Gates, education will take a holistic approach, tailored to the natural strengths and interests that come with each personality. Staff will be enhanced, not reduced, and classes sizes will finally shrink to a size that will allow all students to flourish and grow to their fullest potential.

DeVos was met with fierce backlash from educators and students from all over the country. Parents, teachers and other education workers expressed their anger over the appointment of an open enemy of public education and thousands of students walked out of their classes in protest. Within days of assuming her new role, a group of protesters blocked DeVos from entering a public school in the nation’s capital.  Such demonstrations serve as a small example of the power wielded by the working class, but much more will need to be done to stop these attacks.

Public education advocates are looking for any way to improve the system, but are grasping at straws due to the constraints of the system. Only through mass organization and mobilization can we fight the austerity and inequality of the capitalist system. The American Federation of Teachers, National Educators Association, and other unions must lead the fight-back against enemy number one of public education. The example of the Chicago Teachers Union, which won a significant partial victory by building widespread community support, gives a glimpse of what is possible through collective action and solidarity.

The broader working class must join in the struggle with the teachers to defy Betsy DeVos and the privatization of education, resist so-called “right to work” legislation and other attacks on labor unions, and build a mass socialist party, based on and controlled by the workers and fighting to win political and economic power. Only with a socialist planned economy will we be able to establish an education system that meets the needs of all. Lifelong learning for all, both in and out of the classroom, from the cradle to the grave, will be every human’s birthright.