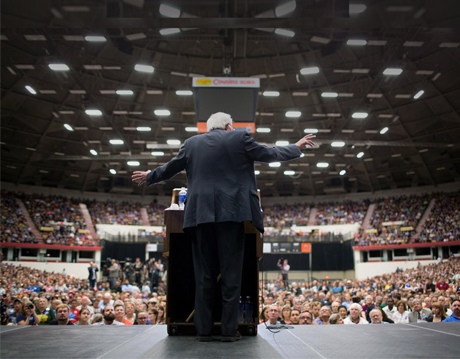 Editorial from Socialist Appeal No. 90

After years of monotonous two-party ping-pong, American politics has started to get interesting. Without a mass political party of our own, US workers are forced to abstain, cast a protest vote, or choose between one capitalist party or another. So far, these are still the only options for 2016. But although the current contest is being played out within the narrow constraints of the two-party system, the limits of the current set up are increasingly apparent. Just a few months ago, it was shaping up to be a snoozefest between yet another Bush and another Clinton. However, Bernie Sanders and Donald Trump—and above all, the American electorate—had other ideas.

As American society becomes increasingly polarized, it is natural that the political process will reflect this—with all the accompanying distortions and confusion US politics is known for. A record 17 Republicans and 5 Democrats are already in the mix, a clear indication that the ruling class is unsure how best to proceed. The gloves were off in the recent Republican debate and it won’t be long before the Democrats are forced to tear into each other as well. With an astonishing $5 billion expected to slosh around the various campaigns, they must choose the candidate most suited to confront an almost certain dip back into recession between now and 2020 and an ever-more volatile world situation.

Trump’s absurd ravings have injected some life into the Republican contest, and despite his reactionary positions on issues such as immigration, he is seen as a “straight talker”—a far cry from the artificially polished, poll-driven calculations of the more “moderate” candidates. Small business people and small town America love an entertaining celebrity, not to mention a right-wing demagogue, and this explains his appeal. But a week is an eternity in politics, let alone 15 months, and he has far from clinched the nomination. If he fails to win official Republican backing and proceeds to run as an independent, it would introduce an electoral twist not seen since Ross Perot’s billionaire populist campaigns in the 1990s.

As for Sanders, we have already explained that despite his limited conception of “socialism,” support for his candidacy represents a healthy shift to the left and a rising interest in socialist ideas, especially among the youth and the intelligentsia, both sensitive barometers of the changing mood in society. We have also explained that as long as he creates illusions in the Democrats, his campaign can only serve to confuse and derail the rising ferment into channels that are “safe” for capitalism. Nonetheless, his candidacy is bringing out many contradictions within the Democrats. For example, the trade unions have long been told that the “lesser evil” is their only alternative. But decades of following this political strategy has led to the lowest levels of private sector unionization since 1932. Support for Sanders by the National Nurses United union and anger among the rank and file of the American Federation of Teachers, whose leadership preemptively endorsed Clinton, shows that there is a natural base in the unions for the formation of a labor party.

If Sanders loses the nomination and endorses Hillary, as he has said he will do, the disappointment this causes could move many former supporters to abandon the false hope that the Democrats can be reformed. If he wins the nomination but not the presidency, this will likewise expose the limitations of the “lesser evil” strategy. And if he somehow actually wins the presidency as the candidate of a capitalist party, experience of his policies in practice would disabuse millions of their illusions in the “left boot” of American capitalism.

Both parties understand that debates over issues such as abortion and gay marriage will no longer cut it when it comes to duping American voters to favor one gang of billionaires versus the other. According to Hillary Clinton, “The defining economic challenge of our time is clear: we must raise incomes for hardworking Americans so they can afford a middle-class life. We must drive steady income growth that lifts up families and lifts up our country.” Jeb Bush has also made this a campaign theme, referring to the fact that American families “haven’t gotten a raise in 15 years.” But neither of these parties can offer a solution. The American Dream was a historical anomaly, the product of a very particular set of circumstances, never again to be repeated. Income inequality and exploitation cannot be eliminated under capitalism. War, terrorism, poverty, and ignorance cannot be eliminated under capitalism. Misogyny, racism and police brutality cannot be eliminated under capitalism. Only socialism can lay the material foundations to address these problems and build a better world. That is the world we in the IMT are fighting for, and we invite you to join us.