Anti-Asian Racism and the Los Angeles Massacre of 1871 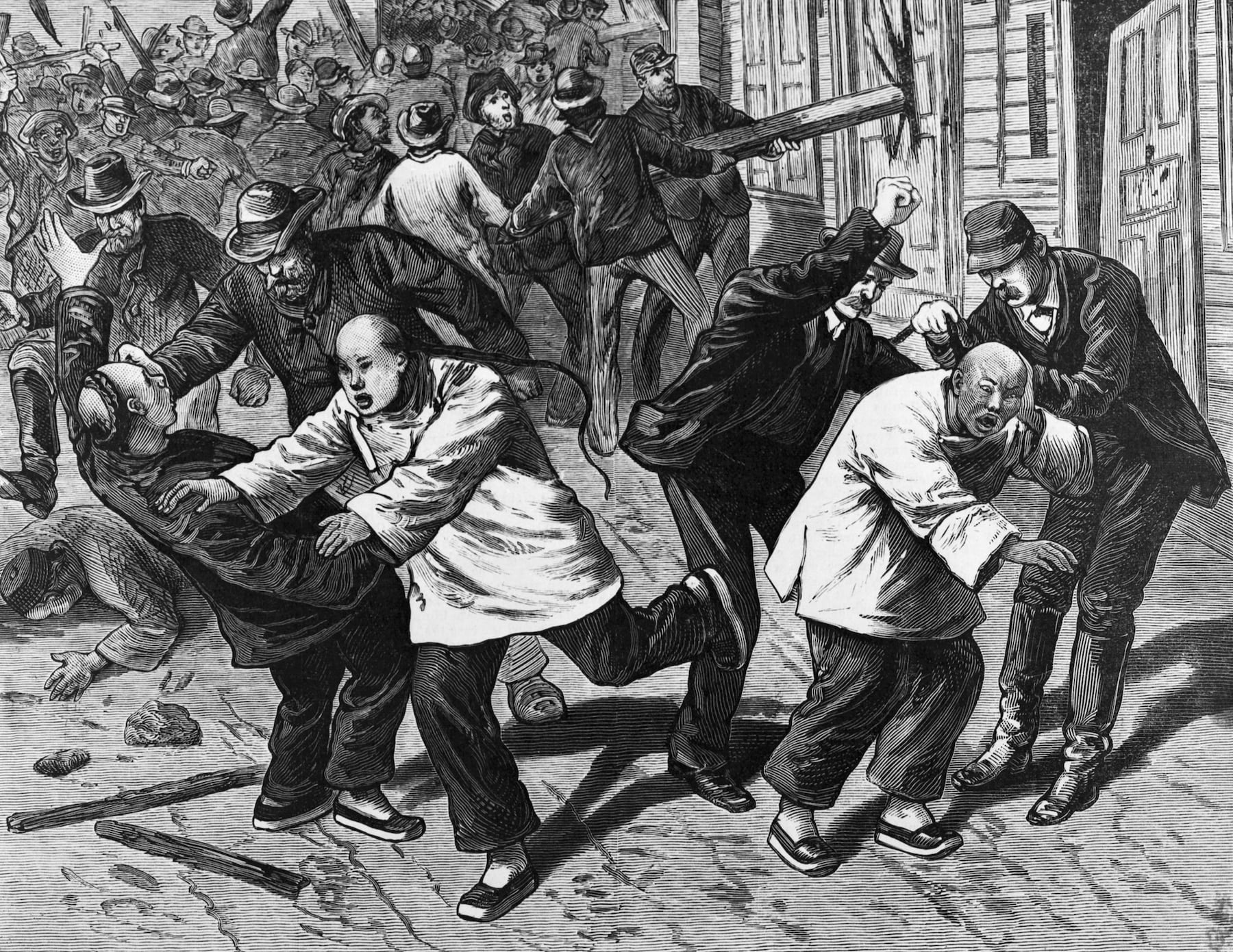 Anti-Asian hate crimes are on the rise in the United States. Last year we saw the racist shooting of eight Asian women in Atlanta. In 2020 and 2021, there were almost 11,000 reported anti-Asian “hate incidents,” which is a marked increase compared to the past two decades. From 1990 to 2019, there were 210 reported violent attacks against Asian Americans or their property, an average of 8.1 incidents per year. In 2020 and 2021, the number was 163, an average of 81.5 incidents per year. Moreover, last year alone, there was a 339% increase in anti-Asian hate crimes. The majority of these attacks were in so-called “progressive” cities like San Francisco, Los Angeles, and New York, where various Asian populations have made their home for over a century. Then again, anti-Asian racism and hate is not a new phenomenon.

The history of anti-Black racism and terror, such as the Tulsa Massacre of 1921, is fairly well known. After all, there were more than 4,000 occurrences of lynchings between 1877 and 1950. But many are surprised to learn that one of the largest mass lynchings in American history was directed against Chinese residents in Los Angeles, over 150 years ago. During the Los Angeles Chinese Massacre of 1871, one in ten of the city’s Chinese population was killed in a horrifying orgy of racist violence perpetrated by a white and Hispanic mob. Some 19 Chinese men, women, and children were murdered in cold blood, some of them tortured. Virtually everyone in the local Chinese community lost someone, or knew someone who was killed.

Contemporary journalism blamed Chinese residents of the city for the violence, because of the involvement of local criminal syndicates and sex-trafficking in the events leading up to the massacre. However, the victims of the lynching were not Chinese gangsters, but working men and women who lived in the Old Coronel building where one of the local syndicates happened to have its base of operations.

On the other hand, it was a common trope of the yellow journalism of the time to portray Asian workers as “hyper industrious,” in order to scapegoat them for white workers’ low wages. Racist slander like this has always been the refrain of the ruling class, so as to obfuscate the real causes for low wages and poor living conditions. The bosses must drive wages down to secure higher profits, and there is no better way than to pit the workers against one another instead of the bosses. Unsurprisingly, some modern historians have overemphasized wage competition between white and Chinese workers as the key trigger for the mass lynching. However, if we want to understand the real interrelation between economics and racist ideology, we need to look at the role Chinese immigrants played in the development of early US capitalism.

Marx described how capitalism came “dripping from head to toe, from every pore, with blood and dirt.” This was no exaggeration in the case of California. Tens of thousands of Chinese peasants-turned-laborers migrated to California in pursuit of their fortunes during the California Gold Rush of 1849. In large part, this population had been dislocated by the Opium Wars (1839–42, 1856–60), which cemented English and French imperialism’s “right” to export opium to and extract reparations from China.

The majority of Chinese migrants were men who did not plan to settle in America, but rather, hoped to return to their homeland with a few hundred US dollars in their pockets. This made Chinese workers a prime target for xenophobic journalism in California. The Chinese were depicted as transients, a public menace, and a threat to the livelihood of white workers. For instance, the Los Angeles News at the time bluntly characterized the Chinese as “barbarians taking jobs away from whites.”

However, economic feats like San Francisco’s 1862 industrial boom, which employed thousands of Chinese wage-laborers in cigar and shoe production, and the construction of the transcontinental railroad, whose rail lines tens of thousands of Chinese laid, were unrealizable without these workers. In fact, the railroad was a prerequisite for creating a truly national market from the Atlantic to the Pacific Oceans after the US stole more than 500,000 square miles of territory from Mexico in its first major imperialist war. Capitalism, not just in California but across the continent, required this industrial feat for the nation’s productive forces to develop.

By 1870, there were approximately 37,000 Chinese in California, out of a total population of 560,247. However, migration from Northern California to Southern California was slow, and the sprawling behemoth of modern Los Angeles lay many decades in the future. A year before the lynching, 178 of the Los Angeles’s 5,728 residents were Chinese, roughly 3% of the population. The majority of Chinese laborers in Los Angeles were laundry workers, cooks, and other domestic servants. These were undesirable jobs for Anglo and Latino Angelenos, who primarily worked as ranchers in the city’s agricultural sector.

In fact, only 30 Chinese laborers worked alongside Anglo and Latino farm laborers, house servants, and hotel or restaurant workers. As historian Scott Zesch argues, there is actually little evidence for supposed wage competition between white and Chinese workers in Los Angeles. The size of the Chinese population was too insignificant to make a meaningful impact on agricultural wages, and they did not even compete for the same jobs as Anglo and Hispanic workers. Moreover, unlike San Francisco, Chinese workers were not competing with Anglo workers for industrial jobs. Despite this, by 1869, the Los Angeles News was echoing Sinophobic attacks that originated from contemporary journalism out of San Francisco. So why did anti-Chinese racism result in a lynching in Los Angeles?

If we want to understand the real cause of tragedies like the Los Angeles Chinese Massacre, we need to examine not only the economic forces at play, but also the political and ideological forces. When we consider the politics of post-Reconstruction California, we see the complicity of both the Democratic and Republican parties in Sinophobic hate.

California was admitted as a free state in 1850, but Confederate sympathies were strong in both the northern and southern halves of the state. Horace Bell, an early chronicler and pro-Unionist in Los Angeles, recounted that pro-slavery sympathies were strong. He attests to fighting Confederate sympathizers in 40 local brawls. However, there were relatively few Black Americans in California in 1870. Of the state population of 560,247, there were just 4,272 Black residents, less than 1%. So who could the ruling class direct racist sympathies against?

Sinophobic racism mirrored anti-Black demagoguery in the Southeast United States during the Reconstruction period. For instance, at a campaign rally, future Democratic Governor Henry Huntly Haight posed the question: “What would you think… if, to punish you [the government] should disfranchise half your white population, and by military force give the Chinese population the right of suffrage?” The Democratic Party of California thus stirred fears over the federal occupation of former slave states as part of their electoral strategy against the Republican Party. It is worth noting that after the period of radical Republicanism in the 1860s and ‘70s, the Republican Party of California vociferously championed the Chinese Exclusion Act in 1882.

The Fifteenth Amendment, passed during Radical Reconstruction, defends a citizen’s right to vote, prohibiting the federal government or any state government from denying a citizen’s right to vote “on account of race, color, or previous condition of servitude.” This was a necessary condition for the development of capitalism in the former slave states, because the Northern capitalists needed a political base of support among former slaves. Incredibly, although the Fifteenth Amendment went into effect nationally in 1870, California only ratified it in 1962. In fact, California was the only free state not to ratify the Fifteenth Amendment during Reconstruction! Both Democrats and Republicans were united in opposing citizenship and enfranchisement for Chinese immigrants.

In order to secure their economic domination over the working class, the bourgeoisie in California determined that they should stir anti-Asian sentiment rather than secure Chinese workers’ civil rights. This was the same tactic used to divide poor whites and former slaves in the southeast United States, and native-born workers against Irish and southern European immigrants in the northeast. Today, Latin American immigrants are pitted against “natural-born” US citizens. The capitalists have no interest in defending workers of any background.

As part of fomenting these racist divisions, an 1863 statute in California prohibited a Chinese man from giving testimony against a white man in a court of law. Some historians believe this emboldened the mob. After the lynching, only ten of the 500 rioters were ever brought to trial. Eight were later convicted of a reduced charge of manslaughter, but all of the convictions were thrown out a year later on a technicality—since the original indictments had failed to specify who had been murdered. On the other hand, eight Chinese were charged with the murder of Ah Choy, a hitman killed by Chinese gangsters on the same day as the lynching.

The defending attorney of the indicted rioters, J.C. Kewen, and the Attorney General, Cameron Erskine Thom, were both Confederate sympathizers and friends. Thom was a veteran in the field of law, but he wrote an obviously clumsy indictment. Moreover, although prominent residents of Los Angeles—including future Democratic politician H.M. Mitchell—were seen cheering the lynch mob, only members of the working class were ever indicted. None of the defendants likely could have afforded a high-profile lawyer like Kewen, who himself was a former attorney general. The ruling class in Los Angeles wanted the whole incident swept under the rug as quickly as possible. Bourgeois law was uninterested in justice for the victims of the lynching.

Five years after the massacre, the railroads extended to Los Angeles and white workers started settling in the city by the thousands. In 1867, Governor Haight had emphasized the importance of the railroad as a means of encouraging the importation of more white labor. He viewed this as an urgent necessity, lest a further influx of Chinese immigration become “a curse upon posterity for all time.” Needless to say, Los Angeles residents supported the Chinese Exclusion Act of 1882, which was only repealed in 1943.

Today, there are no landmarks remaining from the time of the lynching, including both the Coronel Building and the street it was on, Calle de los Negros. Yet, the legacy of Anti-Asian racism persists today in new and horrifying forms. In the 19th Century, Democrats and Republicans alike riled up racist fears among white workers in order to rally them behind their respective banners. Likewise, racism motivated California’s gun control laws in the 1970s, aimed at working-class Black Americans. Trump’s defense of the term “Kung Flu”and the ongoing misogynistic attacks against Asian women in Georgia, NYC, and elsewhere are only a few of the ugly symptoms of modern anti-Asian racism. Racism only serves the interests of the ruling class, in order to divide the workers and obscure their common interests.

The working class has nothing to gain from racist ideology or any form of oppression that we suffer in capitalist society. Instead, we should celebrate the achievements of Asian American workers, which are the legacy of the entire working class. For example, Chinese workers on the Transcontinental Railroad staged an eight-day strike in 1867—the largest strike in US history at that time!

Socialist Revolution fights to forge solidarity among all workers, be they white or Asian, men or women, documented or undocumented. As we fight in the day-to-day struggle against the many forms of oppression wielded by the ruling class, socialists point out that the working class must unite across all racial, national, gender, and other lines to overthrow the current system. There is no other solution to racism, sexism, or any other form of oppression. It is only with a workers’ government, truly representative of all layers of society, that we can build a world free from exploitation and oppression, thus ending the basis for horrors like the Los Angeles Chinese Massacre of 1871.