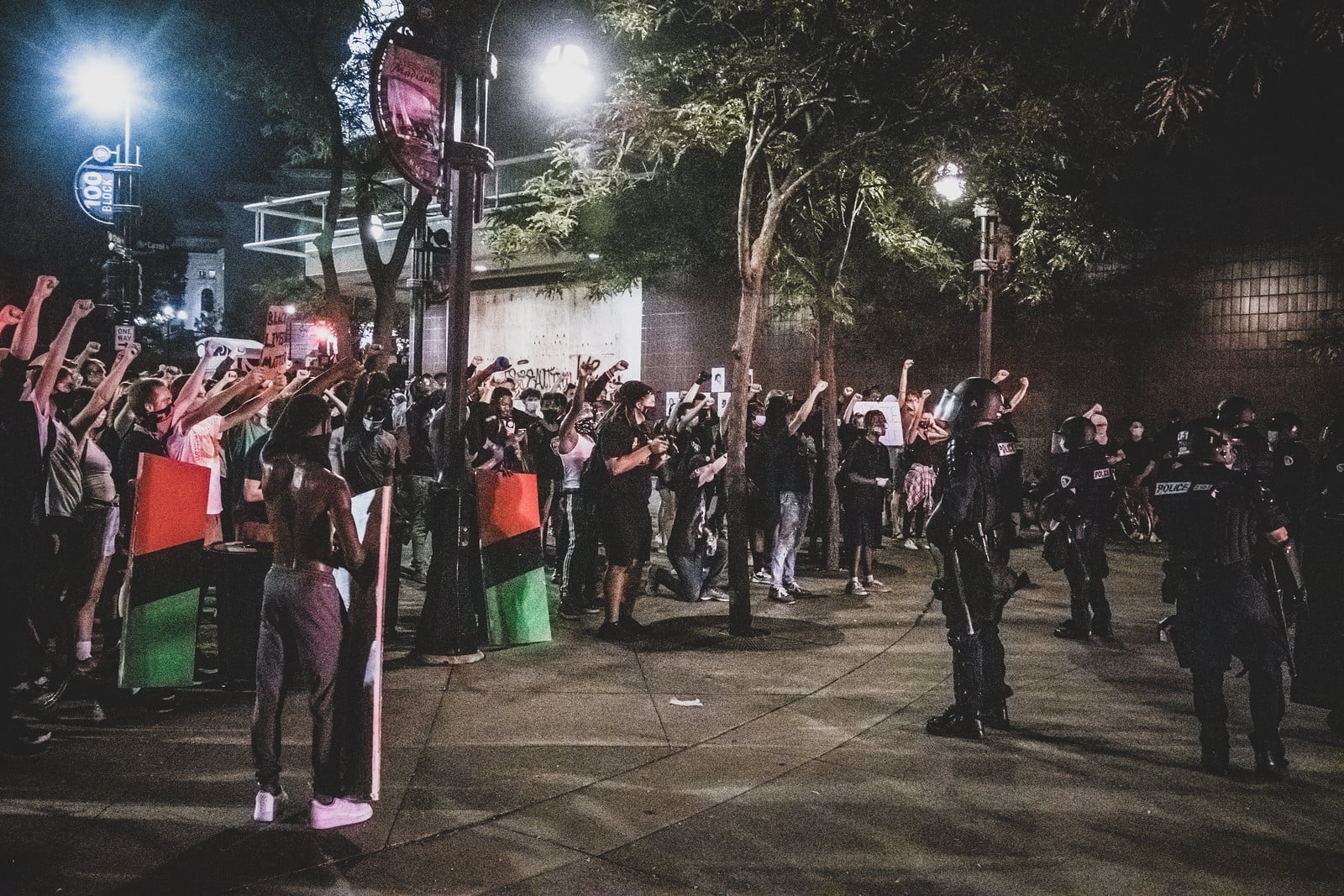 Another unarmed black man has been shot by police, this time in Kenosha, Wisconsin. The now-viral video of the shooting begins with Jacob Blake walking around his car to open the driver’s side door to get in, tailed immediately by two cops. One of the police grabs the back of Blake’s shirt, pulling him backwards to prevent him from getting into his vehicle, and almost immediately begins shooting at close range, firing seven shots into Blake’s back. Not shown in the video were Blake’s young children sitting in the backseat. Blake was admitted to the hospital, and his father says he is now paralyzed from the waist down.

That night, protests erupted in Kenosha, a small city located on Lake Michigan between Chicago and Milwaukee, with a population of just over 100,000 people. Anger intensified as vehicles, small businesses, and government buildings were set on fire over two nights of protests. In response, police erected barricades and used teargas and violence against the protesters.

The standoff continues in #Kenosha pic.twitter.com/nYp96Yy1DJ

Until recently, it would have been hard to imagine such a social explosion in this sleepy commuter town. But the massive Black Lives Matter protests this summer have revealed the intense anger felt by millions of people at the gross inequity of the world we live in.

The rural-urban divide in America, which once appeared to be insurmountable, is breaking down as the violence of capitalism and its state rears its head in every corner of the country. Scenes of brutal repression, which previously went largely ignored in the media, are now increasingly experienced directly—or captured on video for everyone to witness. After months of a mishandled pandemic, coupled with a crippling economic crisis, Washington remains paralyzed, and there are few benevolent feelings towards the US government to be found anywhere in the country.

The protesters in Kenosha were joined within 48 hours by protesters in Madison, New York, and Minneapolis, where five protesters were arrested. In Minneapolis, small protests continuing from George Floyd’s death have gone on for weeks with no arrests, violence, or property damage. The reappearance of police at these protests and the instant crackdown in Kenosha indicate that they desperately want to stamp out the movement before it takes off again.

On the third night of protests, the stakes were escalated when a small group of armed men “guarding” a gas station shot at protesters, after the crowds had mostly dispersed for the night, killing two people and injuring another.

These isolated vigilantes have nothing whatsoever to do with the neighborhood defense committees and patrols that sprang up in Minneapolis in the aftermath of the George Floyd protests. Those committees emerged organically in order to protect the businesses workers depend on in their neighborhoods, particularly in poor and black neighborhoods. Despite these patrols being armed in many cases, the only shooting to occur during the Minneapolis protests happened before these patrols were set up. By contrast, the “guards” in Kenosha were right-wing individuals who wanted to help Trump impose “law and order” through Wild-West vigilantism.

In response, Wisconsin Governor Tony Evers wants to double the number of National Guard troops on the streets. However, if past experience is any guide, any additional state forces will be used to further repress the protesters—not the alt-right. We should remember that the emergence of the alt-right is not just a function of Donald Trump, but also of the Clintons, Obama, and Biden. Trump is a consequence of the overall political polarization and the decay of the capitalist system.

It is not an unimportant detail that this attack took place long after the crowd had dwindled. These reactionary cowards with guns know they wouldn’t stand a chance—armed or not—against a protest at its height.

🎥🛑In #USA protesters took to the streets of New York City in solidarity with the Kenosha protests against racist police brutality, after Jacob Blake an unarmed 29-year-old Black man was shot 7 times in the back by police. pic.twitter.com/x14QNgj3Aa

As in Minneapolis and elsewhere, the question of defending the protests against the official and unofficial repressive bodies of the capitalist state, through the collective action of the workers, is increasingly coming to the fore. The potential for setting up neighborhood defense committees to protect and forge working-class unity in Kenosha is enormous. But we cannot depend on the movement to spontaneously create these structures, as it did in Minneapolis. Even there, their emergence was not entirely spontaneous. Small but established groups like the NAACP and AIM, which protesters trusted, were already in place and took the initiative to form or expand existing committees. This is why having a revolutionary leadership with an implacable commitment to class independence, prepared in advance, is so important.

The police officers who tased and then shot Jacob Blake, have 30 days to submit a report, as they wait for the fires to go out, all from the comfort of suspension. But the embers are still hot from this summer’s protests. The night before Blake was shot, protests began over another police shooting in Lafayette, Louisiana, after cops killed Trayford Pellerin outside a convenience store. Meanwhile, the protests in Louisville, Portland, and Minneapolis continue to bring out small crowds.

The authorities continually appeal to people to wait for the legal process to run its course. This means placing our faith in the same state apparatus that committed the crime in the first place. Derek Chauvin, the officer who killed George Floyd, has a court date set for March 8, 2021—plenty of time, they hope, for people to move on and get caught up in the daily grind. But when new victims of police terror emerge every week, they can’t simply hit snooze over and over and expect people to go back to sleep. The police union’s appeal to “wait until we have all the facts” may as well be said to a pregnant woman who has entered labor. The need to change society is long overdue—and merely saying “wait” cannot stop the convulsions or the course of nature.

Many Democrats have tweeted their condemnation of the shooting. Joe Biden has called for an investigation. Even before Blake was shot, the Democratic mayor of Kenosha declared racism to be a public health crisis. But people all over the country have seen exactly how the government deals with public health crises like COVID-19–in a bipartisan way, issuing grand declarations while doing nothing of substance.

The myriad crises hammering the workers and poor has led to social explosions in one city after another over the last few months. Now little Kenosha is at the epicenter, with burning cars and buildings, and a hailstorm of teargas and rubber bullets.

President Trump chastised Oregon’s governor for not calling in the National Guard sooner to repress Portland’s “Wall of Moms.” But the Democratic Governor of Wisconsin has wasted no time in calling them in to “keep order.” Both parties agree, in practice, on keeping an armed force well-funded and on-call to be used against the working class in case of an uprising.

Martin Luther King, Jr. once said that “riots are the language of the unheard.” As long as the cries of “I can’t breathe!” are disregarded by the capitalist Democratic Party, who offer only cosmetic changes, mass explosions of anger are the new normal.

But as long as the movement remains leaderless, it will be directionless. Left without a productive outlet for the anger that has been pent up, the disorganization leaves room for individuals, unaccountable cliques, and provocateurs to confuse things even further through petty property destruction. As Marxists, we do not defend private property from vandalism the way the capitalists do. A burning car or bank is in no way equivalent to the horrors inflicted on billions by the system of private ownership of the means of production. But such methods cannot offer a way forward out of the societal impasse that threatens to drag the whole of humanity into the abyss.

The labor unions in Wisconsin and Illinois must take the lead. There are over a million unionized workers in these two states alone. The labor leaders should harness their massive membership and resources to coordinate the formation of local workers’ self-defense committees, to be linked up regionally and then nationally. They should immediately begin preparations for statewide general strikes. Such measures alone can provide a real check on the use of violence by the state. Workers in Minnesota, Oregon, and elsewhere around the country would eagerly heed a call to action such as this. This would prepare the ground for a nationwide general strike that would call into question the entirety of the status quo.

Instead, the union leadership is desperately trying to funnel the movement’s energy into voting for Democrats like Joe Biden—a segregationist-friendly welfare “reformer” who has vocally come out against the modest demand to even partially defund the police. Not to mention his running mate Kamala Harris, California’s former “top cop.” Workers around the country have poured onto the streets by the millions, driven by the sentiment that an injury to one is an injury to all—it’s time for the union leadership to catch up!

Fight racism with working-class solidarity—prepare for a general strike!