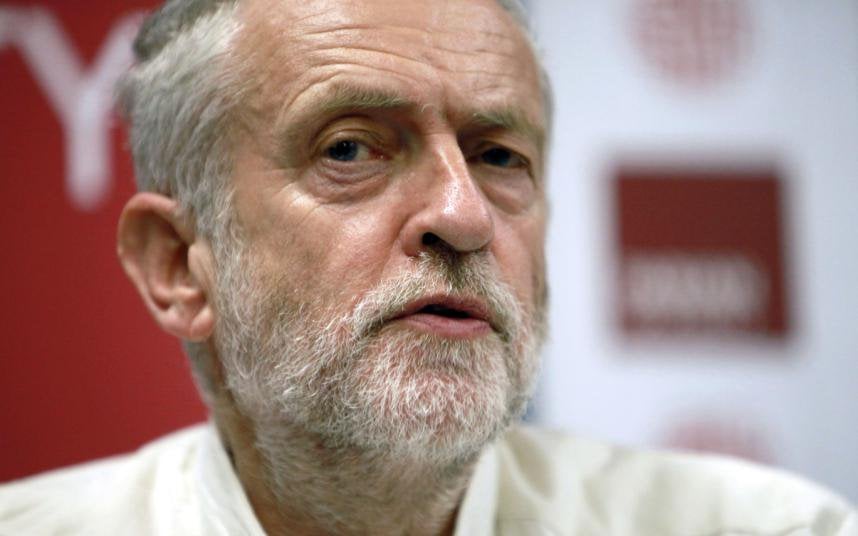 To the shock and surprise of the Blairites, Jeremy Corbyn has emerged as the frontrunner in the race to become the next leader of the British Labour Party. At the time of writing, Jeremy has secured the nominations of 70 constituency Labour parties, ahead of the “favorite” Andy Burnham at 67, with Yvette Cooper on 58 and the arch-Blairite Liz Kendall trailing at 12. At the same time, a leaked private poll of party members has shown Jeremy to have a commanding lead of 15 points over his three right-wing opponents.

Jeremy’s campaign has been enormously bolstered by official backing from UNITE, amid reports that the union has so far signed up 50,000 trade union members as affiliated supporters, enabling them to vote in the election. Other unions are said to have signed up 25,000 supporters, bringing the total of union members able to vote, so far, to 65,000. Alongside a further 12,000 official supporters, it is clear that Jeremy’s campaign has attracted much attention from workers and youth, and that the left-wing candidate has galvanized a large bulwark of support on the basis of his bold anti-austerity stance.

Nevertheless, while these figures are indeed impressive, they still only represent a small fraction of members in affiliated unions who could vote. If UNITE were to sign up just 10% of their over-one-million-strong membership they could have the decisive say over the contest and ensure Jeremy is elected. Meanwhile, while UNITE and other major unions such as the RMT and FBU have come out in support of Jeremy, the big Labour-affiliated unions of Unison and GMB have yet to give Corbyn their backing. The union leaders must now step up their campaign and throw their full weight behind Jeremy’s leadership bid, who is the only candidate that backs trade union policies.

These developments have naturally left the right wing apoplectic with rage. Although they would have preferred to have kept Jeremy off the ballot, they imagined that he was “old and weak” with “outdated” politics that could easily be defeated as a precursor to crushing the left of the party once and for all. Now that the exact opposite has come to pass, they are cursing this previous error of judgment and are desperately scrambling to prevent Jeremy from winning, at any cost.

Corbyn’s popularity and mass support has rattled the Blairites and the wider establishment at large. Initially written off and ridiculed by both right-wing Labour leading figures and the Tories, concerns are now mounting about the potential for a Corbyn victory. The Blairites’s worries are such that they are even openly talking about the possibility of a coup against Corbyn in the event that he wins the leadership contest. The Daily Mail has even reported one senior Labour MP as saying that he is campaigning for the current election to be scrapped, with the fig leaf of an excuse that the results are being distorted by Tories registering as supporters to vote—all thanks to a voting system that the right wing of the Labour Party pushed for in the first place! Clearly the right wing will stop at nothing to prevent Jeremy from winning.

“We cannot just allow our party, a credible party of government, to be hijacked in this summer of madness,” one Labour MP was reported as saying in the Independent (July 19, 2015). “There would be no problem in getting [the 47 required] names [to remove Corbyn, if elected]. We could do this before Christmas.”

As the Independent goes on to say, however, “talk of a potential coup will cause uproar among grassroots Labour members because, in this scenario, Mr. Corbyn would have won in the most democratic leadership contest the party has ever held.” Indeed, any attempted coup or bureaucratic stop to the leadership election would lead to an even greater uproar and civil war inside the party, with the trade unions and the mass of rank-and-file Labour members on one side, and the careerists and Blairites on the other. The more farsighted Labour figures, therefore, will likely opt for a more subtle sabotage campaign if Corbyn emerges victorious.

Nevertheless, such comments are indicative of the real nature of these right-wingers and the scant regard that they have for party democracy and the will of ordinary people. In their eyes, Labour members are to be seen but not heard—mere pawns for their backroom deals, donkeys to be brought out for their annual electioneering.

Andy BurnhamLabour First, a grouping of arch-Blairites within the party, is now openly running a “vote for anyone but Corbyn” campaign, in the hope that one of the less popular triumvirate of Burnham, Cooper, or Kendall might scrape a victory on the basis of second preferences in the transferable voting system.

All manner of careerist creatures, including Tristram Hunt (the man who was parachuted into parliament against the will of the constituency Labour Party that he now represents), have now come forward, patronizingly appealing for people to vote for anyone but Jeremy, having the audacity to tell ordinary people what Labour needs to do to win the minds of . . . ordinary people.

Such Blairites have been lining up to dole out condescending advice to party members. Interim leader Harriet Harman, who is nominally supposed to remain independent in this contest, urged members to “think not who you like and who makes you feel comfortable—think who actually will be able to reach out to the public,” a none-too-coded warning against voting for Jeremy, the candidate who would supposedly make Labour “unelectable.”

The cognac-swilling former leadership candidate Chukka Umuna (a member of an exclusive, elite private members club), meanwhile, has accused members of “behaving like a petulant child who has been told you can’t have the sweeties in the sweet shop,” and explicitly urged people not to vote for Jeremy.

Others at the top of the Party are now calling for Labour “grandees” such as Gordon Brown and David Blunkett to intervene in the debate on the side of the Blairites. It may only be a matter of time before Blair himself is exhumed from beneath his piles of cash to add his voice to the cavalcade of right-wingers clamoring for anyone but Jeremy to win. It is notable, however, that Blair has not weighed in yet—a recognition of how toxic an ideology Blairism has become.

Professional politicians: out of touch with reality

Under the guise of “reclaiming the center ground,” all these ladies and gentlemen are pushing a right-wing agenda of austerity, attacks on welfare, and UKIP-pleasing immigration controls. Sealed off from the real world that the vast majority of workers and youth inhabit, these professional politicians cannot understand how and why Jeremy’s anti-austerity message finds such an echo across society. But as Zoe Williams commented in the Guardian (July 19, 2015):

Part of the reason is a simple disconnect between Westminster’s idea of “realism” and everybody else’s. Many of Corbyn’s positions—that some industries should be renationalized, that we can afford the NHS so long as we’re prepared to raise money through general taxation—are actually shared by the majority of voters.

Those party figures warning against a Corbyn victory all sing from the same hymn sheet. Apparently Jeremy is “unelectable” and will drive the party into the “electoral wilderness.” Because Labour has lost two elections, what is apparently now necessary is a lurch to the right in order to win over Tory voters. But this is rank nonsense. The Blairite creatures putting forth such arguments conveniently forget that Labour saw a complete electoral wipeout in Scotland, where the SNP made massive gains on the basis of an anti-austerity message to the left of Labour.

Furthermore, they seem to ignore the fact that it was precisely when putting forward more left-wing demands that Ed Miliband and the Labour Party’s popularity shot up in the polls. Far from being “too left-wing,” it was the attempts to imitate the Tories, with promises by Miliband, Balls, and co. of balanced budgets and immigration controls, which lost Labour the election.

Jeremy is apparently most popular with young and new members, with some estimates that over two-thirds of recent Labour recruits (roughly 50,000 since the election) back him. This demonstrates the popularity of a radical anti-austerity message among fresh layers getting involved in politics for the first time. Instead of chasing Tory voters, a Labour Party led by Jeremy, offering a bold alternative to capitalist austerity, could reach out to the millions of disenfranchised workers and poor who have given up on politics. Let us not forget that the Tories only won on the basis of 24% of the electorate. Why must the Labour Party prostrate itself before this tiny minority, instead of building a movement of the majority to change society?

The cries and wails of the Blairites about Jeremy being “unelectable” only show how out of touch these careerists are from ordinary people. They use the fact that Jeremy is only on the ballot because of MPs “lending” him their nominations to try and prove how little he represents the wider population. Unfortunately for these right-wingers, they will not be able to take back these “lent” nominations. Meanwhile, they conveniently ignore the fact the Jeremy has gathered dozens of nominations from constituency Labour parties, as well as the support of major trade unions and hundreds of local councillors, and has attracted thousands to his campaign meetings across the country. If anyone could be accused of “not representing the wider electorate,” then, it would be these very same Blairites, who are a million miles removed from the lives of the vast majority of people in Britain.

Vote for Corbyn! Fight for socialism!

For the ruling class, it is not the prospect of a Labour Party led by Jeremy losing the next election that keeps them awake at night. What they’re really worried about is precisely the opposite: that a victory for Jeremy would mean giving a prominent platform in parliament to a strong anti-austerity voice, which in turn could open the way for a mass movement that could provide people with the confidence to stand up and fight back against austerity.

The current “leaders” of the Labour Party are totally committed to the capitalist system, and consequently support the policies of austerity that flow from this system in crisis. They have watched with alarm the rise of Podemos and SYRIZA in Spain and Greece, and dread the day this political earthquake might spread to the shores of supposedly sleepy Britain. Indeed, the tremors of radicalization have already begun to be felt with the SNP’s landslide victory in Scotland. Jeremy’s campaign is another expression of this global process, and the problem facing the establishment is that they can’t do anything to stop it.

Jeremy has said that although he is doing everything he can to win the leadership election, what is most important is that, regardless of the result, the campaign is the starting point to build a mass movement against austerity. We agree completely agree. But, as the recent capitulation to austerity by Alexis Tsipras and the SYRIZA government have demonstrated, good intentions and a desire for change are not enough.

If such a movement is to be successful, it is necessary that it is fully armed with Marxist ideas and understands that austerity can only be stopped by an overthrow of the system whose crisis demands it. We urge you, therefore, not only to vote for Jeremy, but to join Socialist Appeal and the International Marxist Tendency, in order to help make this possibility of revolutionary change a reality.