Britain: No Confidence in Starmer—We Need a New Left Leadership 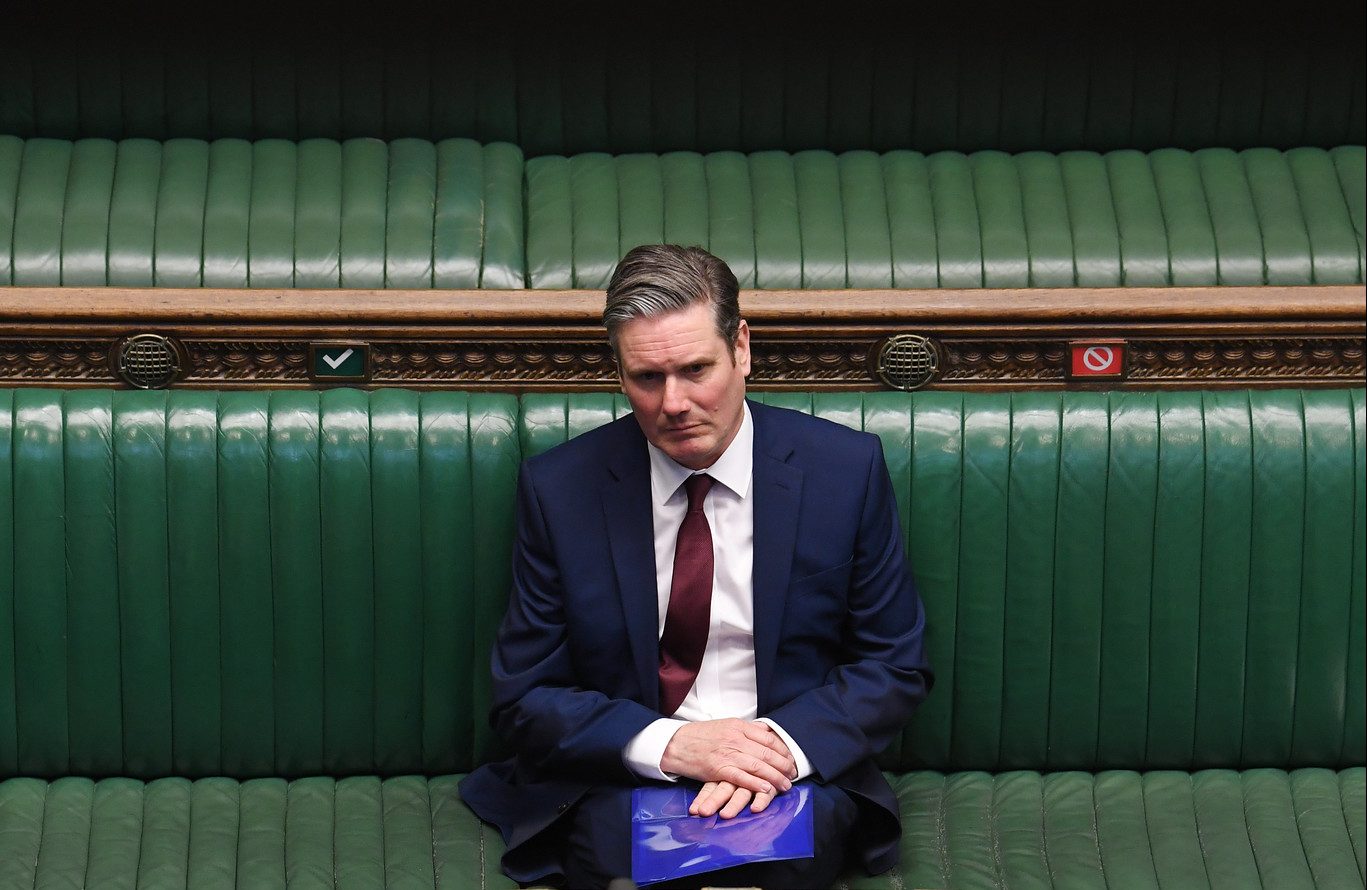 Keir Starmer is doubling down in the wake of Labour’s dismal election results, accelerating the shift to the right. If we want a real “change of direction,” we need an urgent change of leadership. Starmer out! Fight for socialism!

Last week’s elections were a disaster for Labour. Mayoral victories in Manchester and London, along with the win in Wales, do little to make up for the catastrophic defeat in Hartlepool. This is even more the case when the loss of councils—in Durham, Harlow, Southampton, and elsewhere—is added to the picture.

Nevertheless, in the face of this fiasco, the Labour leadership is doubling down. Rather than accept responsibility for the party’s poor electoral performance, Keir Starmer has scapegoated Corbyn and the left.

Under pressure from the establishment and their Blairite agents, therefore, “Sir” Starmer is pushing the Labour Party even further to the right. This is clearly demonstrated by the Labour leader’s shadow cabinet “reshuffle” over the weekend.

Despite joining the right-wing chorus in their witch hunt against the left over the past year, deputy leader Angela Rayner has been sacked as party chair. Similarly, Anneliese Dodds has been replaced by the arch-Blairite Rachel Reeves as shadow chancellor.

For all their overtures to the right wing, Rayner and Dodds are clearly considered to be too left wing; too associated with the legacy of Corbyn, which the right are determined to bury.

News of their removal provoked a backlash, however, forcing Starmer to offer some concessions, with both MPs given new roles in the shadow cabinet.

Meanwhile, other prominent right-wingers—such as Wes Streeting—have also been promoted to more senior roles. And the capitalist press have called for Blairite grandees such as Hilary Benn and Yvette Cooper to be restored to the Labour frontbench.

This latest reshuffle shows clearly where the Labour Party is heading under Starmer. He has no intention of standing down or tacking left, but is set on accelerating the party back to full-on Blairism.

In other words, there is no chance of “unity” between the right wing and the left—and there never was.

Just heard Wes Streeting has the brief on poverty?

He was brought up on a council estate, BUT – if he TRULY knew poverty, why did he bully and backstab a leader who promised hope and change for MILLIONS?!

How can Streeting do this role in all good conscience?#LabourReshuffle

Following these changes, leading Labour lefts have reiterated their appeals for Starmer to “change direction.”

Left MPs such as Diane Abbott and Richard Burgon both repeated this call in television appearances over the weekend; and Momentum’s representatives have also continued to put out statements along similar lines.

Keir Starmer certainly is changing the direction of the Labour Party… to the right!

Labour can’t go on as we are. The leadership urgently needs to change direction.

We have the popular policies needed to rebuild our support. The leadership needs to start championing them.

My article for the Independent 👇
https://t.co/kknH6fRt9X

We must learn the lessons from the past year—and, indeed, the last five or more years. We will never “convince” Starmer and the right wing to “change direction.” Attempts at “unity” with these saboteurs are naive, and simply sow confusion.

The right wing are Tory infiltrators, intent on making Labour an out-and-out party of the capitalist establishment. They do not want a “broad church.” Instead, they want to obliterate the Corbyn movement and everything it stands for.

This is evident from recent comments by Lord Peter Mandelson, who made clear the Blairites’ true intentions: to liquidate the Labour left entirely, beginning with “hard left factions attached to trade unions.”

The fact is, the Blairites would rather destroy the Labour Party than see a socialist Labour government. That much is clear from their latest stubborn refusal to see what the Hartlepool debacle represents. For them, it is a question of “rule or ruin.”

If we want to see a “change of direction,” we need a change of leadership. And that must begin with removing Starmer. There is no other way.

There is already massive disillusionment in the Labour Party, given the rapid shift to the right and the string of broken promises under Keir Starmer. It is clear to all that he was elected as leader under false pretenses.

On top of that, the leadership has waged a war against the bulk of the membership, with the aim of driving them out of the party. Jeremy Corbyn has been excluded, with no indication of him being restored to membership of the Parliamentary Labour Party.

Many members who might previously have had illusions in Starmer—with his hollow calls for “unity”—have now lost confidence in the leadership, but are at a loss of what to do. Thousands more (potentially as many as 100,000) have left the party in disgust.

This has provoked—under Starmer’s leadership—the deepest crisis in the history of the Labour Party. And given the right wing’s refusal to discuss the question of a recall conference of the party on the NEC, the only option now for resolving this crisis is to remove Starmer, at the earliest opportunity.

Instead of trying to persuade Starmer to change course, therefore, the left should mobilize its forces to fight back and say: Starmer out!

The disastrous Hartlepool by-election result shows that #Starmer is not fit to lead the #Labour party. Enough with flag-waving and appeals to big business! We need to take on the Tories with socialist policies. #StarmerOut pic.twitter.com/eVadvrBR4Q

The first step should be to pass motions of no confidence in Starmer in every CLP and affiliated union. Given the anger in local Labour parties, such motions (see model motion below) are already being submitted and discussed, now that the purdah period has ended.

A wave of no confidence votes would reveal the true feeling inside the party. It would show where the real balance of forces lies. And it would help to galvanize grassroots activists, after a demoralizing year of retreats. 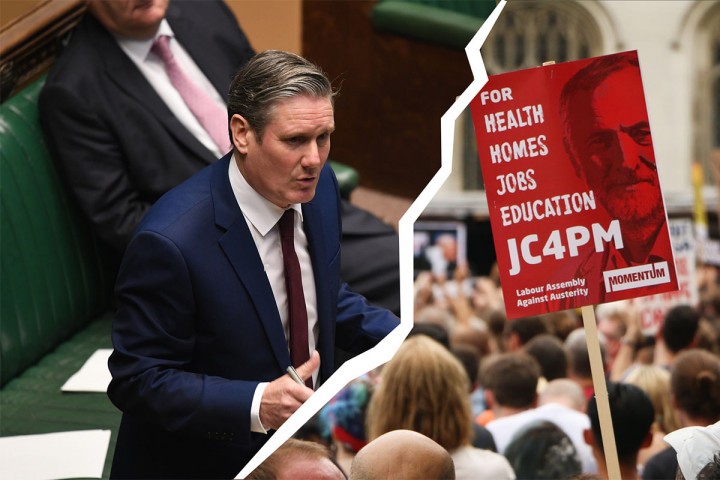 But even this is not enough. After all, according to current Labour rules, such votes have no real power; they are just indicative, and can be easily ignored.

What is needed is a left leadership challenge. But at present, with Starmer digging his heels in, a candidate would require getting support from at least 40 MPs (20% of the PLP) to set the ball rolling. For a left-wing challenger, this is extremely unlikely, to say the least.

If the incumbent were to stand down, however, then a candidate would only need 20 MPs (or 10% of the PLP) to get onto the ballot. This would be entirely possible for the left to achieve.

The problem is: Starmer clearly has no intentions of resigning. The right wing is terrified of opening that door. After all, the establishment burnt their fingers badly by allowing Corbyn onto the ballot in 2015. They would do everything to avoid repeating this “mistake.”

The only way to resolve this is to push through an official change in Labour’s rule book, saying that there is an automatic vacancy if the leader has faced a successful Vote of No Confidence (VONC) at a party conference.

A rule change motion to this effect has already been raised on the left, and is being circulated for discussion in many CLP meetings this month (see below). Socialist Appeal fully supports this move, and calls on others to join this campaign for a left leadership challenge.

Such a rule change does not contradict the “three-year rule” for motions to Labour conference. And if successfully passed, it would come into force immediately.

The closing date for rule change motions for this year’s annual conference is 11 June 2021. This means that left activists must move quickly, with only a month to pass this recommended rule change before the deadline.

If this rule change is successful, alongside a vote of no confidence, the rules say that there must be a new leadership contest to fill the “vacancy.” With such a “vacancy,” only 20 MPs would be needed to support a left candidate. This could be achieved, given that the Socialist Campaign Group has around 32 members.

Such a challenge would transform the whole situation. The left would once again be in the ascendency—hopefully having learned the mistakes of the past.

We must expose the hollowness of the right-wing claims of “unity” for what they are. Party democracy must be fully restored. Corbyn—and those suspended for defending him—must be readmitted. And a struggle must be waged to remove not only Keir Starmer and David Evans, but all the right-wing saboteurs in the PLP and Labour HQ.

If we do not take this route, then there is no viable way of challenging Starmer and reversing this shift to the right in the party. The left will continue to be attacked and marginalized. And grassroots members will continue to leave out of demoralization and disgust.

It is vital that the left seizes the moment to take the fight to the right. The future of the Labour Party and the class struggle depends on this. We need to mobilize our full forces, and fight to transform the party from top to bottom—into a vehicle for socialism and the interests of the working class.

Between 2A (The leader and deputy leader shall be elected…) and 2B (Nomination), insert a new clause 2B on ‘Vacancies’, as follows:

Chapter 4, Clause II:2.B: “A vacancy occurs either when an incumbent stands down; or has faced a successful vote of no confidence, carried by a simple majority at a national conference of the Party.”

This CLP believes that the election result in Hartlepool is a disaster for our party. Instead of winning back voters in key working-class areas, we are losing further seats to the Tories.

This CLP believes that this is the result of the rightward turn taken under Keir Starmer’s leadership: abandoning class-based policies, and instead resorting to flag-waving and appeals to big business.

Instead of attacking the Tories, Keir Starmer has spent more time attacking grassroots members, with unjust suspensions and suppression of members’ democratic rights.

For all these reasons, this CLP declares that it has no confidence in Keir Starmer. We call on him to stand down immediately, and for a leadership contest to be set in motion – so that the membership can elect a new leadership that will fight the Tories on the basis of a bold socialist programme.