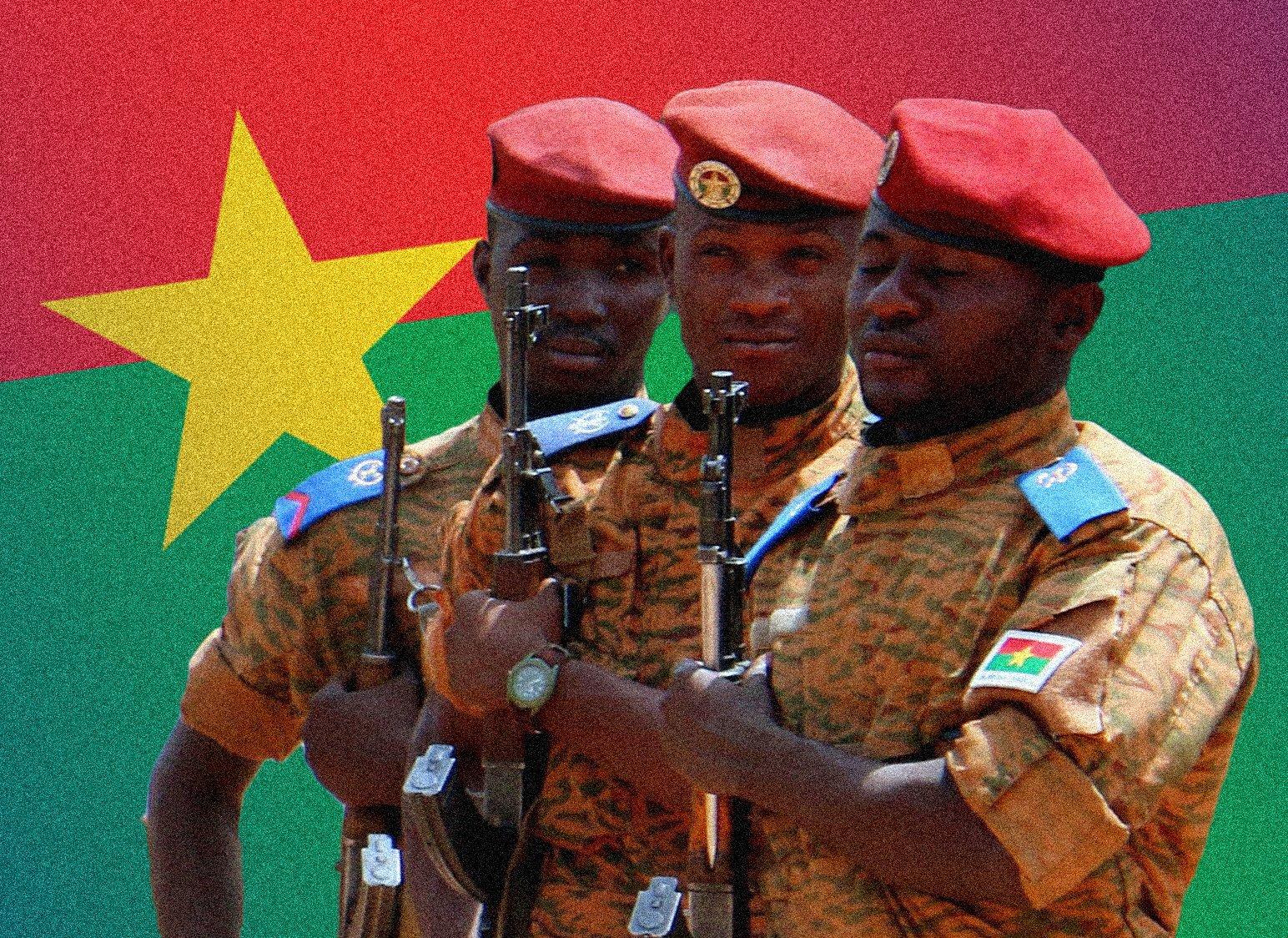 On January 23, soldiers led by lieutenant-colonel Paul-Henri Damiba seized control of a military base in Ouagadougou, the capital of Burkina Faso. Shortly afterwards, gunfire erupted in front of the presidential residence and several military barracks. Several hours later, President Roch Kaboré was reported to have been detained by the soldiers.

A statement from the Twitter account of Roch Kaboré urged dialog and invited the mutinous soldiers to lay down arms but did not address whether he was in detention. The following day, the military announced on television that Kaboré had been deposed from his position as President. After the announcement, the military declared that the parliament and government had been dissolved, and the constitution suspended. In a statement, Damiba said soldiers were putting an end to Kaboré’s presidency because of the deteriorating security situation amid the deepening Islamic insurgency, and the president’s inability to manage the crisis.

The military decided to move now in order to cut across a revolutionary mood building up in society. Just eight years ago, a revolutionary mass movement overthrew long-term dictator, Blaise Compaoré. Then, one year later, the masses rallied again to overthrow a pro-Compaoré counter-revolutionary coup. Now, eight years on, the government of Kaboré has been rocked by months of mass protests—not just against terrorist attacks, but against corruption and the deteriorating economy. The military decided to act in order to prevent a repeat of the mass movements of the past several years.

The genesis of the crisis

In essence, the coup in Burkina Faso is another consequence of NATO’s intervention in Libya in 2011. The NATO-led intervention in Libya was aimed at cutting across the Arab revolutions. This completely destabilized the situation and threw the country into chaos, with Islamic militias overrunning Libya, committing wide-scale atrocities including kidnappings, massacres, bombings, human trafficking, and even starting a slave trade.

In turn, the fall of the Libyan regime in 2011 and the return of thousands of combatants to Mali and Niger contributed significantly to the destabilization of the central Sahel region. The chaos unleashed after the overthrow of Gadaffi in Libya has spilled over into an Islamist insurgency in the Sahel. This insurgency has intensified since 2015 as weapons and insurgents flow from Libya into Mali, where there has been a long-standing insurgency in the Tuareg region. Countries like Mali, Mauritania, Niger and Burkina Faso have had to bear the brunt of deadly terrorist attacks which have intensified over the last few years.

Following the first Libyan Civil War and the concurrent NATO intervention in 2011, Islamist attacks in Burkina Faso and neighboring Mali became more common. The central Sahel region spans Burkina Faso, Mali, and Niger. The crisis escalated in January 2012, when civil war erupted in northern Mali between security forces and these armed groups fighting for independence in the Tuareg region. A coup followed, essentially splitting Mali in two. By the end of the year, 340,000 people were displaced within the country and approximately 145,000 people had sought refuge in neighboring countries.

Since 2013, the jihadist have swept from the north into the center and across borders into south-western Niger and northern and eastern Burkina Faso. The al-Qaeda affiliate, Jama’at Nusrat al-Islam wal-Muslimin (JNIM), and the Islamic State’s local branch have profited from frictions within and among rural communities in these areas, recruiting angry locals to expand operations. Jihadist attacks have increased fivefold since 2016 and inter-ethnic violence has ballooned.

The crisis has since spread to northern Burkina Faso and western Niger, escalating to new levels in 2020. The three countries share a border region called the Liptako Gourma, which is affected by increasing terrorist attacks perpetrated by these states and armed groups. In this conflict, the local population are caught in the crossfire. These armed groups operate in an environment of growing competition over dwindling resources, high levels of poverty, rapid and limited access to basic services, like healthcare.

After destabilizing Libya, the imperialist forces then followed the jihadist groups into the Sahel by deploying thousands of international and local troops to the region. This included 4,500 French soldiers, 13,000 UN troops, and about 5,000 troops connected to the French-financed “G5 Sahel” governments which included Burkina Faso, Chad, Mali, Mauritania, and Niger. But this intervention became very unpopular as these forces went on to commit atrocities against the local populations themselves.

All of these interventions have only poured petrol on the flames. The situation has continued to deteriorate and the crisis has taken on a regional dimension. Border regions, especially the Liptako-Gourma region, which borders Burkina Faso, Mali, Niger, and the Lake Chad Basin, are among the most affected areas. The actions of the imperialists, led by France, have directly and indirectly fueled the crisis. This has only succeeded in further destabilizing the central Sahel.

The attacks in the epicenter of the conflict has caused a major humanitarian crisis as attacks targeting civilians increase in number and frequency. There has also been a sharp increase in displaced persons. In Burkina Faso, for example, the United Nations reports that 486,000 people have been displaced in 2019, compared to 80,000 in 2018. Overall, more than 1.5 million people are now displaced in Burkina Faso in a country with a population of 20 million. Over the past 12 months, more than 700,000 people were forced to flee their homes, according to the UN. Hundreds of thousands of Malians and Nigeriens have also been displaced. Since 2016, Burkina Faso has been fighting Islamic State and al-Qaeda in the central parts of the country, including the capital, Ouagadougou.

Initially, Burkina Faso was spared the conflict and violence that had flared in other Sahel countries such as Mauritania, Niger and Chad following the disintegration of the Libyan state in 2011 and the outbreak of Mali’s civil war in 2012. But this changed in 2016 when gunmen attacked a hotel and restaurant in Ouagadougou, killing at least 30 people. It was the first large-scale terrorist attack in the West African country, coming some two weeks after Kabore was inaugurated as president in 2015. Many more attacks would follow, with thousands of casualties.

The coup in Mali in August 2020 essentially had the same character as the latest coup in Burkina Faso. Similar conditions have produced similar results. In both cases the military stepped in to avert mass anger boiling over into the revolutionary overthrow of the government. This is a stark illustration of the crisis of these regimes across the region. In Mali, the mass protests that triggered the coup were sparked by indignation at voting irregularities but were sustained by exasperation simmering on Bamako’s streets with corruption and the state’s failure to check rampant insecurity.

Similar discontent is evident in Burkina Faso and Niger. The military takeover in Burkina Faso comes after months of protests over the government’s failure to curb terrorist attacks. The coup was a desperate attempt to cut across the rising mass anger and avert revolution. It was also an attempt to avert a split in the military, with ordinary soldiers complaining that they had to fight an Islamist insurgency without equipment or a strategy.

Despite being elected for his second term as president in the 2020 Burkinabé general election, Kaboré’s government was very unpopular and faced regular protests due to the handling of the ongoing jihadi crisis in the country and the deteriorating economy. For months now, the government has faced a profound crisis. Kaboré tried to avert revolution from below by starting reforms from above. In December 2021, Prime Minister Christophe Joseph Marie Dabiré was fired from his post amid an escalating security crisis. Following waves of protests, Kaboré replaced the entire government and named Lassina Zerbo as the country’s new prime minister, the latest upheaval in a leadership shake-up that has included military top brass and heads of intelligence agencies. But this only served to anger the armed forces and plunged the government into further crisis.

The government has come under sustained pressure over failures to stem the bloodshed of the brutal six-year conflict which has killed thousands of people, forced 1.5 million from their homes and spawned an immense humanitarian crisis. To prevent this rotten regime from being overthrown by the masses, the military officers have now decided to step in.

In 2014, a revolutionary mass movement overthrew long term dictator, Blaise Compaoré. Then, in 2015 the masses mobilized again to overthrow a reactionary coup led by soldiers loyal to Blaise Compaoré. The downfall of Blaise Compaoré has left behind a country characterized by daily strikes, protests and mass mobilizations of workers, students and the poor. The revolutionary overthrow of Blaise Compaoré on October 31, 2014 was a fundamental turning point for Burkina Faso. It brought an entire country to its feet. It released pressures, which have been accumulating for decades. After being under the jackboot of the Compaoré counterrevolution for 27 years, the masses of the “Land of the Upright People” have dramatically entered the stage of history.

Eight years ago, the revolution ushered in a new era of struggle in Burkinabé society. Through ferocious struggle, workers have wrestled important concessions from the bosses. Huge sections of the population, especially the youth, have rediscovered the revolutionary history of Thomas Sankara. The younger generation is hoping for a change in Burkina Faso.

This shows the revolutionary potential of the working masses. The revolutionary Burkinabé masses must rely on these revolutionary traditions to fight the armed groups which have exacerbated the already dire conditions of the masses of the Sahel. The army officers, which only seek to preserve the interests of the regime as a whole, cannot be trusted to do this! Only by relying on their own strength and linking up with the masses in Burkina Faso, Mali, Niger and the other countries across the Sahel can they succeed in removing their rotten regimes, the terrorist groups and the imperialist powers from the region.