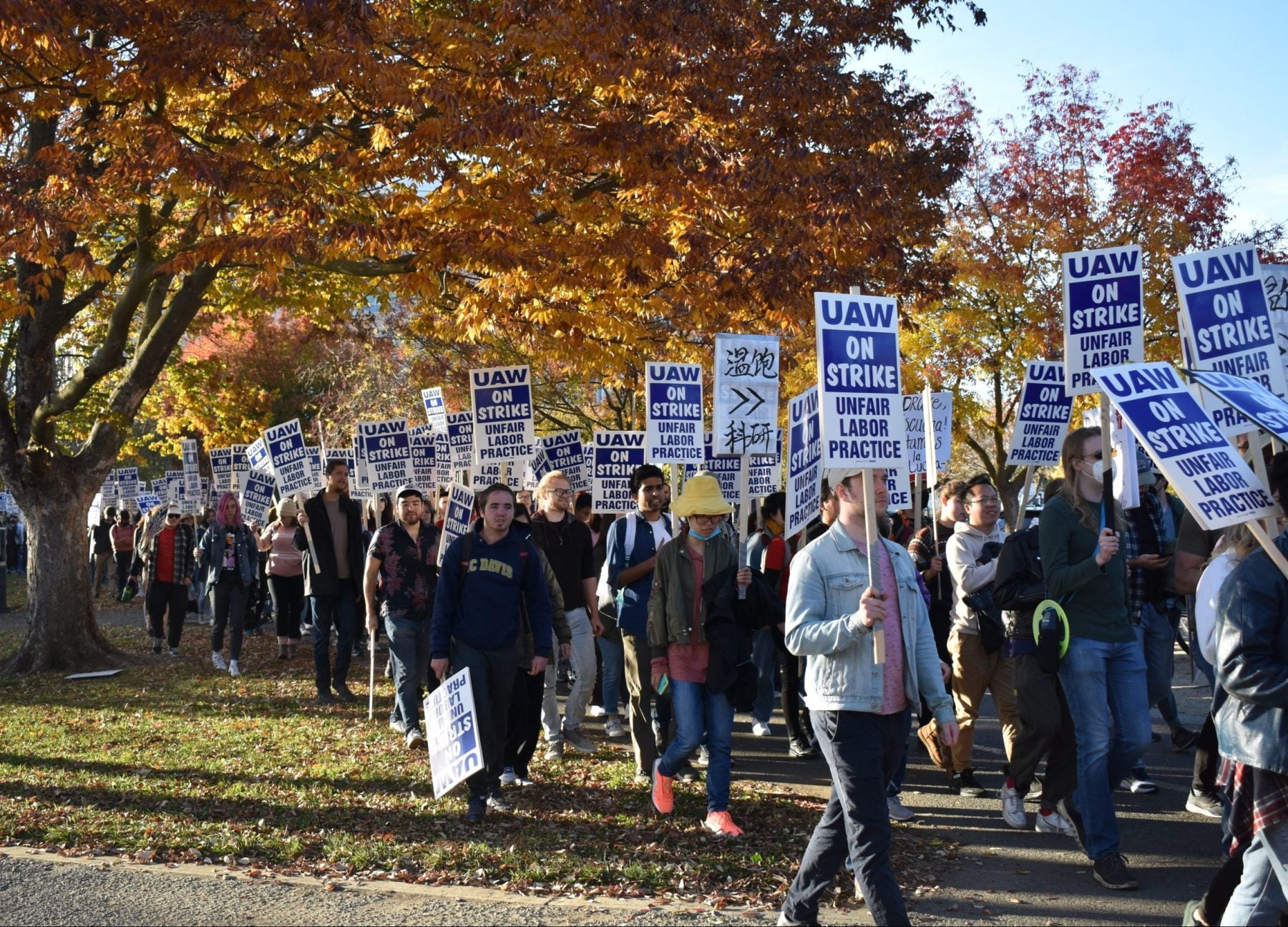 Socialist Revolution comrades are joining picket lines across the country to stand in solidarity with striking workers, bringing a program of class independence and militant class struggle. Click here to read a report of our mobilizations.

On Monday, November 14, nearly 48,000 academic workers walked off the job across all ten campuses of the University of California (UC) system, beginning one of the largest US strikes in recent years. The striking teaching assistants, academic researchers, and other university employees—most of whom are graduate students or postdoctoral fellows—are all members of the United Auto Workers (UAW).

Despite being the largest higher-education strike in US history, this is no isolated event. Adjunct faculty are on strike at the New School in New York City, while earlier this month, New York University reached a tentative agreement with its faculty after the threat of a strike. Both groups of workers are also organized in the UAW.

At Temple University in Philadelphia, the TUGSA graduate student union, an affiliate of the American Federation of Teachers, has authorized a strike. 99% of the student workers voted in favor of striking after 11 months of stalled negotiations with the administration led nowhere. In response, university officials immediately raised their wage offer… by a mere 1%!

This comes after graduate student workers at Columbia University won a new contract at the start of this year after striking at the end of 2021, and the unsuccessful UC Santa Cruz wildcat strike of 2020, which was cut across by the onset of the COVID-19 pandemic. Clearly, academic workers are fighting back like never before.

Aren’t students “privileged”? Why are they striking?

These expressions of the class struggle may come as a shock to many. The capitalist media usually stereotypes college and graduate students as separate from or above the rest of society. Students are certainly not “working class,” after all.

In reality, graduate students (and undergraduates, too) suffer from all of the problems that workers face: inadequate healthcare, high rent, harassment and abuse, and little to no parental leave. Above all, they suffer from low wages—at a time when the highest inflation in 40 years is eroding living standards across the board.

Key in the UC struggle is the lack of affordable housing. Living in one of the most expensive rental markets in the world, academic workers find themselves unable to afford housing on their meager stipends, despite receiving “subsidized” housing from the university. The vast majority of graduate students in the UC system report spending as much as a third of their paycheck on rent, with 40% spending as much as half.

Graduate students fund their education by working “part time” as teaching or research assistants. However, their relationship to university administrations is increasingly more exploitative. Across the country, universities are consistently extending the working hours of student workers, who must grade, conduct research, and set up lesson plans, sometimes for multiple class sections. In cases where there is a shortage of professors, graduate student workers sometimes teach an entire course—despite being contractually obligated to only work 20 hours per week. With little to no time left over to devote to their own studies, let alone enjoy life, and with inflation cutting into their paltry earnings, striking academic workers have been forced to fight for their livelihoods.

The capitalist media has lined up to pour scorn on the UC student workers, pointing out that they are demanding “double” their current salaries. These outlets fail to point out that this means just $54,000 per year for graduate students and $70,000 for postdocs. In California, this is merely the cost of living! In Philadelphia, the Temple graduate students are asking for only $32,000, less than the median cost of living in the city.

Other demands include: improved childcare benefits and parental leave, lower tuition and increased security for international students, and regular cost of living adjustments to combat inflation. At UC and Temple, the administrations are refusing to bargain in good faith, returning to the table (if at all) with pathetic counter offers at a time of near-double digit inflation, dragging their feet, and at Temple, blatantly denying that there even is a problem with the current contract.

Despite being “non-profits,” universities function in much the same way as other for-profit, capitalist institutions. Board members of many universities are multi-millionaire capitalists, landlords, and even billionaires. Many university chancellors and presidents make six figures per year, some make even seven. Instead of improving the safety, security, and educational opportunities for their students, universities “invest” to accumulate larger endowments, get even more funding from various sources, attract greater enrollment, and raise their tuition. They are also often big players in local real estate, cornering the market for housing and commercial space in the neighborhoods surrounding their campuses.

This is also why universities often have bloated sports budgets, building new and bigger stadiums while gentrifying nearby neighborhoods. It explains why in 40 states, the highest paid public employee is either a college football or men’s basketball coach. It’s also why many universities heavily subsidize fraternities and sororities, and then protect, defend, and cover up the disgusting culture of sexual assault, drug abuse, and binge drinking that results. Not to mention the ongoing student debt crisis.

Schools with a “left” image are not exempt from the capitalist crisis and its resulting labor fightback. Part-time faculty at NYC’s New School, which prides itself on a history of hiring “progressive” professors to ensure an “open” intellectual space, went on strike this week after receiving no raises for four years. Thanks to inflation, this is an almost 20% cut in real wages. Part-time faculty there make up a whopping 87% of the educational workforce, yet they have little job security, minimal healthcare, and are demanding more pay for the hours spent working outside the “official” work day. Similar to the other university administrations’ union-busting tactics, the New School’s team walked away from negotiations last weekend, with a “last, best, and final offer” that doesn’t address any of the workers’ key demands.

As the crisis of capitalism deepens, the university system is less and less removed from broader society, and the same goes for the university labor movement. The campus strike battles cannot be seen in isolation from the broader labor movement. Around the country, working-class militancy is increasing. Workers are engaged in organizing battles at Trader Joe’s, Starbucks, Amazon, Apple, and other companies. Unions are polling at their highest level of support in 40 years—with all other political institutions at their lowest. The higher-education strikes are one more battleground where workers are struggling to exercise their collective power. Socialists, graduate and undergraduate students, and the broader labor movement must support these academic workers wholeheartedly. A victory on campus is a victory for workers everywhere!

The fact that workers on and off campus are heading in the same direction should tell us something: student workers are not separate from the broader working class. Understanding the implications of this lesson will be the key to genuine victory.

The 48,000 workers on strike across ten UC campuses are no mere drop in the bucket. The ruling class understands the danger of a union victory at UC. It would not only lighten their pockets, but also increase the confidence of workers and youth across the country. That’s why university administrations are fighting back with all of their might, using both the carrot and the stick.

It is imperative that the academic workers spread the strikes to other sections of the labor movement. The key to this equation is the labor leadership. The UC system contracts with 15 different labor unions. At Temple University, the administration contracts with 11! Doing this benefits the employer greatly. Being divided into so many different organizations cuts across worker solidarity. The administrations are careful to ensure that the dozens of campus collective bargaining agreements all end at different times—so the workers are never coordinated in action.

The union leaders must fight against this atomization by spreading and synchronizing the strike to all workers in a given university system! In addition to demands specific to academic workers, they should put forward a broader program that would apply to all campus workers. This should be coupled with mass meetings of all the workers on the campus, emphasizing the interest that they have in common and their need to unify against the administration. This would draw other unions on campus into the struggle. In addition, the union leaders should invest time and money into organizing the unorganized—on campus and off—to ensure the broadest possible support for strikes and other militant mass action.

The leadership can also spread this movement into the broader community. Through concerted outreach and patient explanation of the issues at stake, strikers can win sympathy in the working-class neighborhoods where many campuses are located. And they can appeal to the rest of the labor movement for sympathy strikes! Such strikes are currently illegal under US labor law—but eventually, the labor movement will have to tackle such anti-worker legislation head on.

For a successful example of militant class-struggle tactics, we need only to look across the northern border. Earlier this month, the Canadian Union of Public Employees (CUPE), which represents education workers, defied reactionary “back to work” legislation and struck illegally. The CUPE workers forced the government to rescind said legislation after the strike risked becoming a general strike. To ensure real victories for academic workers, bold tactics like this must be emulated in this country!

One key lesson to learn from the history of the labor movement, including the recent victory in Canada, is that the workers can only rely on their own strength. While some Democratic politicians have come out in support of some of these university strikes, this must be taken for what it is—empty pandering. The Democrats may talk the talk, but talk is cheap and they never walk the walk. History shows time and again that what little they give with the left hand they will eventually take back with the right. Nor are the courts and the National Labor Relations Board (NLRB) friends of our class. This is exactly why these universities are actively looking for “third party arbiters”—they know that any “third party” outside the labor movement will side with them.

Undergraduates can play a big role by supporting the striking workers. Indeed, solidarity from the broader student body will go a long way for the workers. The part-time faculty at the New School prepared for their strike by having “strike schools” for sympathetic workers and students. The results have been visible in the form of massive picket lines!

And socialists, whether workers, students, on campus or off, also have a role to play. Marxist student clubs and societies must mobilize to support the workers while bringing a class-independent program to the picket lines. They can also offer a platform for striking workers to speak and spread news of their struggle. Socialists and communists in education unions should build rank-and-file caucuses to fight for even more militancy and bold demands. The CUPE strike in Canada shows that even a small Marxist presence in a union can have a big effect! And of course, students and workers must unite in campaigns against crossing the picket lines. Above all they must all understand the deep meaning of labor’s defining slogan: An injury to one is an injury to all!

The only thing university administrators will understand is hard-line class militancy. Campus workers know a thing or two about class. But instead of teaching class, now is the time to fight as a class. Not class-action lawsuits, but class action—militant working-class action. That is the way forward!