Capitalism and the Attack on Public Education 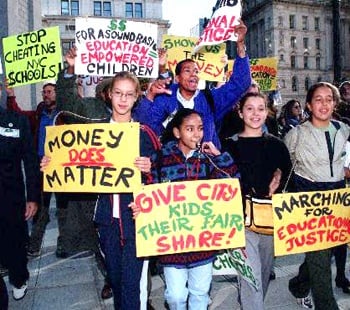 During the past several decades, government funding for public education at all levels has declined and in some cases plummeted, leaving students languishing in overcrowded classrooms, housed in dilapidated buildings.  An examination into why this is happening offers a glimpse into the ugly mechanisms that fuel capitalism in its onward quest to plunge us all into a state of unmitigated barbarism.

We should note at the outset that a well educated citizenry is in everyone’s interests.  Those who are more educated are more economically productive, they are less likely to turn to crime (insofar as the entire capitalist system has not yet been formally declared as “criminal”), and they are more likely to enjoy a higher quality of life.  The American public consistently registers strong support for public education. 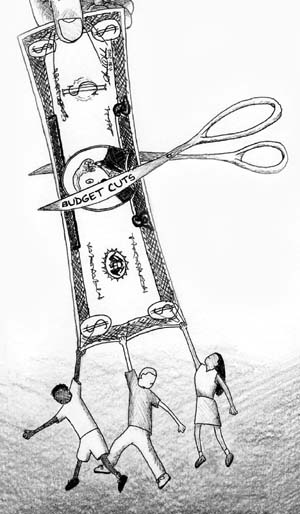 With all these abundant benefits and so much public appreciation, a sane person can only wonder why government policy is bent on steering public education over the cliff.  As we shall see, one simply must master the perverse logic of capitalist society to appreciate these developments. Under capitalism, what is good for the rich is good for everyone, despite the fact that the rest of us are impoverished.  Those who can master this principle love capitalism.

Let us review some of the grim statistics that highlight recent trends:

* States are cutting more from higher education budgets than from any other large programs. In 2004, for example, cuts in Massachusetts amounted to a staggering 21.5 percent while California lost approximately 9 percent.
* The share of all public universities’ revenues deriving from state and local taxes declined to 64 percent in 2004 from 74 percent in 1991.
* State and local tax revenues devoted to public higher education have been declining for several decades.

Given that the federal government only provides 7 percent of money spent on public education, the above statistics signify a startling drop.

While government funding for higher education has been declining, student tuition fees have been surging, thereby shifting the burden from public funds to overwhelmingly working class students and their families, which simply amounts to a backdoor privatization of these institutions.

Why this march to mediocrity and beyond for public education?

While these policies devastate the lives of most of us, corporate America nevertheless benefits, and some sectors benefit tremendously.  A cluster of corporate interests that want public education defunded have joined forces.  In the absence of a well organized and orchestrated opposition, corporate interests have prevailed.

For example, one reason why public education has been placed in a state of stress is that corporations have campaigned to reduce their tax burden.  In 1960, the share of federal taxes paid by corporations was 23 percent.  By 2003 it had dropped to 8 percent.  There has been a steady decline on the state level as well.

One might think that corporations are shooting themselves in the foot by undermining institutions that provide them with an educated workforce at public expense.  But several factors lead them to believe that they will not be adversely affected.  First, they do not need as many highly educated workers as before since computers have been able to replace teachers, accountants, secretaries, technicians, etc.  Second, they want educated workers, but they want the workers to pay for their own education, thereby lifting the burden off themselves.  Third, if there is a shortage of educated workers, corporations have lobbied to be allowed to import them from other countries, and since these workers are not U.S. citizens, corporations can pay them less than a comparable U.S. worker.

In March 2007, Microsoft Chairman Bill Gates told Congress that the U.S. “should welcome an infinite number of high-skilled foreign workers to fill engineering, computer programming and other jobs…” [emphasis added].  Fourth, corporations think university budgets are bloated, so budget cuts have forced class sizes up and salaries down.  Moreover, half the faculty members at colleges and universities across the country have been converted into part-timers with much lower pay and often no benefits.

But aside from the fact that defunding education allows corporations to lower their tax base, other benefits lurk in the school hallways for the enterprising entrepreneur.  In particular, decimated budgets place schools at the mercy of profit-hungry, avaricious corporations.  Channel One, which provides free television and cable access to classrooms, includes 2 minutes of advertisements for every 10 minutes of programming.  In New York, a company (Noggin) is allowed to enter the public schools one morning each week to run 30-minute focus groups on unsuspecting students in order to perfect the company’s techniques for selling children things they do not need.  School districts have felt compelled to sell soft-drink companies the exclusive right to vend their products in schools, despite the fact that soft-drinks contribute significantly to child obesity.  Textbooks in California now include advertisements so that corporations can target a captive audience.

But there are other corporate vultures salivating on the sidelines.  Michael Milken, the former junk bond king who was convicted and sent to jail, Paul Allen, co-founder of Microsoft, and Lamar Alexander, a former U.S. presidential candidate, have launched a movement to “revolutionize” public education and transform it into a consolidated, professionally-managed, money-making set of businesses.  And they will be competing against a rival group of corporate raiders.  Ted Forstmann, a billionaire leveraged-buyout specialist, John Walton, heir to the Wal-Mart fortune, and John Doerr, a technology venture capitalist who is heavily immersed in for-profit educational ventures and a former campaign adviser for Al Gore, have similar designs.  They, too, aim at overhauling the nation’s system of public schools, eliminating what they call the “government’s monopoly” in education.

All of this is to say that the nation’s educational policy is not crafted by rational principles that attempt to legislate what is in the interests of the majority.  Rather, policy is left to the whims of a few powerful corporate elites determined to raise their profit margins even higher, despite the fact that in order to succeed they must take from those who are struggling just to get by.  But such an undertaking simply reflects the underlying philosophy of capitalism:  everyone is supposed to compete against everyone else to maximize their own individual well-being.  And those who already have the most are the ones who almost always triumph in this sordid exercise.

Corporations have banded together in order to bring down public education.  Working people, particularly teachers, students and concerned members of the community, will have to join ranks in order to resurrect it.  Isolated teachers’ unions have been too weak to mount an effective campaign.  They demand that school districts fund education properly, but district administrators respond – often honestly – that they simply do not have the money.  Teachers’ unions must unite on a statewide basis in order to insist that the rich in each state be taxed so that money can be made available.  Such a campaign would be even more powerful if teachers forged an alliance with health care workers and social workers, demanding money for human needs, not profits.  If such a movement succeeded in a single state, it could quickly spread throughout the nation since the vast majority of the American public wants quality education, quality health care, and quality social services for their children and themselves.

In order for this movement to get off the ground, however, the unholy alliance between the unions with the Democratic Party must be severed. The Democratic Party is entirely adverse to mobilizing working people and regards mass mobilizations as the political equivalent of a wildfire:  something to extinguish immediately before it gets out of control.  Instead, the Democrats consistently use issues of public concern to gather more votes for themselves and then are quick to abandon the working people that they have galvanized.

A recent (January, 2007) faculty demonstration organized by the California Faculty Association union at San Francisco State University, which is part of the public system of higher education in California, provides an instructive example of the corrosive effects of the Democratic Party.  The featured speaker at the demonstration was Democratic Party California Assemblyman, Leland Yee, who highlighted legislation that he had recently proposed.  The legislation would require that the huge salaries paid to university administrators be negotiated in open-door sessions of the board of trustees as opposed to the current practice of negotiating them behind closed doors.  But there was no proposal that their bloated salaries be capped or reduced.  Even more importantly, there was no mention of the dwindling portion of taxes paid by corporations that is crippling the education budgets.  The surplus pay to administrators amounts to millions of dollars and would make only a minor difference in the overall budget if it were recouped.  But the taxes being withheld by corporations amount to billions of dollars and make all the difference. So the real struggle to save the university was derailed because of Yee’s unwillingness to spotlight corporate tax culpability, and the explanation is simple:  The Democratic Party is tied to big corporations just as much as the Republican Party is, and Democrats refuse to bite the hand that feeds them.

So faculty members at San Francisco State were told by the union to attend a rally that was ostensibly in support of their own interests.  But in fact they attended a rally that was manipulated to support Leland Yee.  Yee could pretend that he was doing something significant for faculty members, and they in turn were transformed into unwitting props for his campaign.

We working people clearly need our own political party.  While both Democrats and Republicans alike depend on corporate money for their existence and are intent on returning the favor, a labor party, exclusively representing the interests of workers and the oppressed in general, could bring teachers, students, the unions, and the community together in order to wage a real battle in the interests of the majority.  The working class wants quality public education.  It is simply a matter of organizing those desires and harnessing the energy and together we will triumph.