Capitalism Threatens to Throw Us Back to the Dark Ages 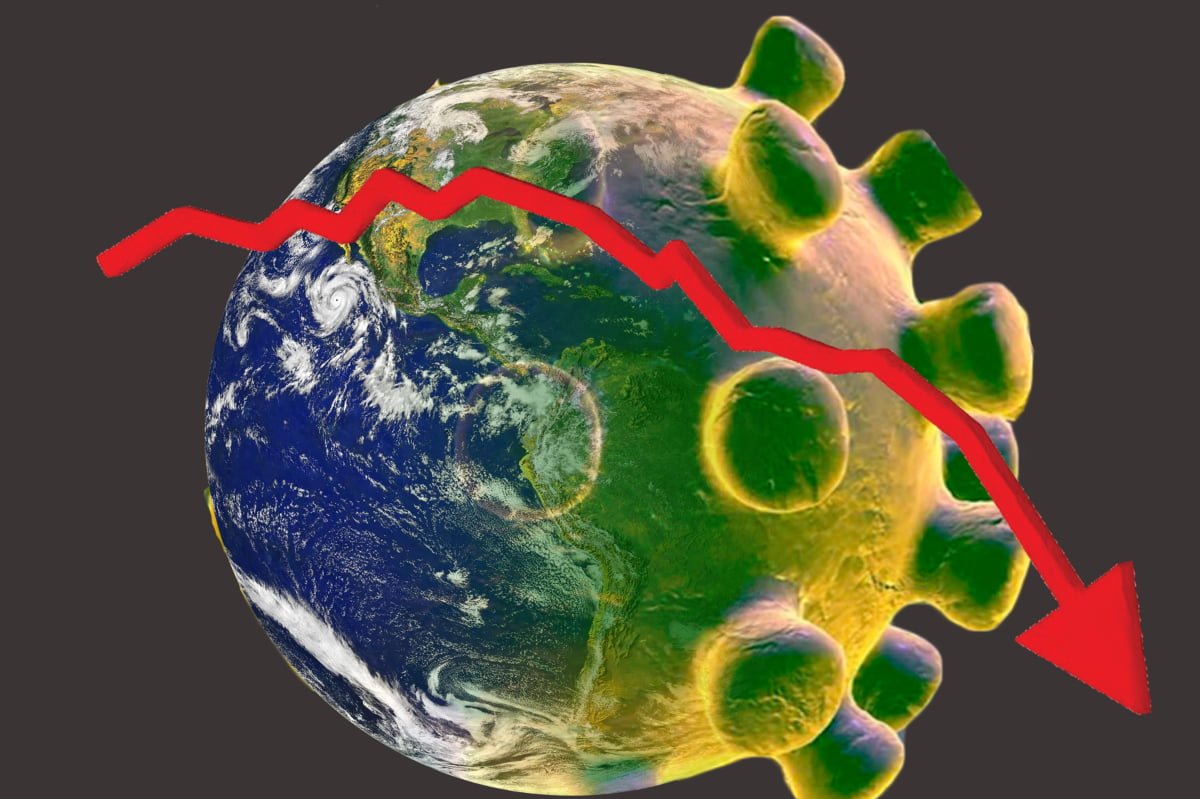 The prospects for the world economy are growing grimmer by the day. Governments are throwing everything they have at the situation. But they have run out of ammo fighting the last crisis. There is no way out under capitalism.

The coronavirus pandemic is wreaking havoc across the world, shutting down society and paralyzing production. As a result, the global capitalist system is facing an existential crisis, with a slump that is affecting all countries simultaneously.

This crisis is going to be bigger than any we have seen before—bigger than 2008, and bigger than 1929–33. Mass unemployment is going to return with a vengeance, as millions lose their jobs. Steve Mnuchin, the US Treasury secretary has warned that the US jobless rate could leap to 20%, with tens of millions affected. It was 10% in the wake of the 2008 crash.

Already, the US National Restaurant Association anticipates job losses between 5–7 million in the next three months. The US Travel Association states that the potential job losses could be 4.6 million by the end of next month.

This crisis has hit the ruling class with a bang. In 1938, Trotsky talked about how the ruling class was tobogganing towards disaster with their eyes closed. It is the same picture today. There is panic everywhere.

China—which was the motor force of world capitalism in the past period—is in free fall. Deutsche Bank has forecast that Chinese GDP in the first quarter will shrink by 31.7%, a previously unthinkable decline. Exports and imports have collapsed, and large parts of the economy are in lockdown.

China will no longer be able to help pull the world out of the slump, as it did a decade ago. Instead, it will now act as a burden. After the 2008 crash, the Beijing government pumped in billions to keep the economy going. Unlike the rest of the world, China’s economy didn’t shrink at that time, and went on to grow by 10% a year. This is now ruled out, given its enormous debts and lack of markets.

The biggest economy in the world, the United States, is heading for a meltdown. Again, Deutsche Bank is forecasting that in the second quarter of 2020, the US economy will contract by 12.9%. This will be the biggest contraction in 80 years—and this could well be an underestimate, as forecasts are being continually downgraded.

Japan is also in a slump, as are the European Union and Britain. Asia, Latin America and Africa are being hard hit. No country will escape this crisis. It is a world crisis of capitalism.

As we have explained before, the world was slowing down long before the coronavirus pandemic. The world was already heading for a major slump. The virus was only the trigger for this—the accident underlying a deeper necessity. Anything could have triggered the slump, which was waiting to happen.

Now the ruling class is in a state of panic at the fear of a complete collapse of the capitalist system. Demand has dropped sharply, as has supply. It is a perfect storm, which could not have happened at a worse time.

The world economy had not recovered from the last slump in 2008. Policy makers had used up all their ammunition in fighting that crisis. They have very little left going into this new wave of economic collapse. A few months ago, the former head of the Bank of England, Mervyn King, talked of the possibility of a “financial armageddon.” Well, the situation is a thousand times worse than even he could have imagined.

After dithering, the US Federal Reserve has slashed interest rates to 0.1% and flooded the bond market with $200 billion “to shock it back to life.” They plan to pump into the economy an unprecedented $1.2 trillion to help prop up the system (including $700 billion in asset purchases), despite disagreements in Congress.

The European Central Bank (ECB) has announced plans to buy an additional €750 billion of bonds (on top of the €120 billion already promised)—namely government debt. In addition, they will buy €20 billion a month of debt, to shore up European governments.

Italy—which is in a very vulnerable position with massive debts—is demanding more measures, and is calling on Brussels to launch a €500 billion rescue fund. However, the ECB already owns €364 billion of Italian debt and is expected to buy a further €150 billion. But the ECB is limited by rules that prevent the central bank from holding more than a third of a country’s debt. This is a limit that will be reached quite soon. There is talk of lifting the limit, but this “no limit” policy has provoked an angry response from Germany and the Bundesbank, who hold the purse strings.

The Bank of England has also slashed interest rates to 0.1%, following an emergency meeting. This means the bank rate is the lowest in the 325 year history of the Bank’s existence. The governor of the Bank, Andrew Bailey (now known to his friends as Bailout Bailey), has described the situation as “absolutely unprecedented,” with financial markets “bordering on disorderly.” He has even threatened to close markets under these exceptional circumstances.

Britain is particularly vulnerable as it has a large current account deficit. This means that it has been reliant on overseas financing. Investors, with such high demands for cash, can push up charges, which could cripple the UK government’s ability to borrow and spend.

The Tory government is between a rock and a hard place. Despite the risks, they have decided to promise £330 billion to help fight the crisis.

Japan has now announced a $275 billion emergency package, which will add to its massive debt pile from the previous recessions.

Capitalist governments are throwing everything—including the kitchen sink—at the crisis. But they know they cannot stop the crash. It is a runaway train with no brakes. All they can do is try to alleviate the situation and hope for the best. “The system isn’t really designed for an onslaught like this,” said one commentator.

They do not have the means to replace the collapse in demand, as wages are cut and people lose their jobs. Their measures are like trying to halt a glacier with a blowtorch. The money they are pumping into the economy is just being poured down the drain, and will do nothing to save the system.

Quantitative Easing programs were tried across the world over the last decade. These were later extended to try and combat the diminishing returns. But the more cheap money they pumped into the economy, the more it created problems elsewhere. This money was funneled into share buybacks and asset bubbles, resulting in the longest bull market in history. Now things are shifting into reverse.

The world stock markets are collapsing. Of course, these are punctuated with “recoveries,” as is always the case. But the trajectory is downwards. According to the Independent (20/3/20), the US stock market is falling faster than during the Wall Street Crash of 1929. That crash also was the culmination of a long bull market. All the gains of the “Roaring Twenties” were wiped out. Today, the Dow Jones index has crashed by almost 32%.

“We simply do not know where the shares will bottom out,” states the Independent “but the pace of the selloff is certainly alarming from a historical perspective.”

Unlike 2008–09, the crisis is universal. No one is excluded. The situation is darkening by the day, as more and more sectors are affected. But this is just the beginning.

The ruling class is largely helpless. They are trying to throw money at the problem. But what we have is not simply a financial crisis (which will get worse), but a systemic crisis of the capitalist system.

The system has exhausted itself. The productive forces—industry, technique, and science—have outgrown the restrictive limits of the nation state and private ownership of the means of production. The market is too narrow for the productive capacity that capitalism has created.

They attempted to get round this problem by artificially expanding the market. But the longer they put off the crisis—a crisis of overproduction—the greater the crisis when it comes. Marx explained this long ago. And these events are a striking vindication of his analysis.

The danger now for the capitalists is that this slump will develop into something much bigger, namely a depression. This danger is talked about seriously in the financial press.

What caused the 1930’s depression was not the slump or crash, but the beggar-thy-neighbor policies that were introduced in the United States in 1930. It was the beginning of a trade war that resulted in a collapse of world trade. Capitalism was only able to get out of this by a world war. This is ruled out now due to the existence of nuclear weapons.

With Trump in the White House, pursuing his “America First” policy, the danger of a trade war is implicit in the situation. After all, he has already unleashed a trade conflict with China and the European Union.

The US President has acted unilaterally during this coronavirus crisis, shutting down travel between Europe and America, much to the annoyance of EU leaders.

A new global trade war—coupled with competitive devaluations—to push the effects of the crisis on to others will mean another Great Depression.

This time, however, it will be on a far larger scale than that of the interwar period. The world is more interconnected than ever before. The impacts of decisions made in Washington, Beijing, and Brussels will ripple throughout the world. This is the perspective we have to prepare for.

The current crisis shines a spotlight on the complete bankruptcy of capitalism, which threatens to throw society back to the Dark Ages.

Only a socialist planned economy—where the resources of the planet are used for the benefit of everyone, not a handful of billionaire parasites—can resolve the impasse. Only the abolition of capitalist anarchy can save us from this nightmare.