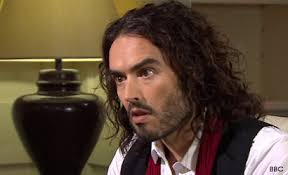 he recent interview with actor/comedian Russell Brand on Newsnight with Jeremy Paxman, dubbed a call for revolution by many, quickly became a viral sensation. Brand declared, “the planet is being destroyed, we are creating an underclass, we’re exploiting poor people all over the world, and the genuine legitimate problems of the people are not being addressed by our political class.” He went on to discuss his own alienation from electoral politics as being a reflection of a feeling that is widespread in Britain.

Brand’s indignation and discontent in the interview and the viral spread of the YouTube video is a clear indication that these are not merely the ramblings of an eccentric celebrity, but a sentiment that is shared by millions who see no representation in the Conservative, Liberal, and even in the leadership of the Labour Party in Britain, or by the main political parties elsewhere in the world.

“Imagining the overthrow of the current political system is the only way I can be enthused about politics,” is how Brand explained his choice to focus on the topic of revolution when he guest-edited an issue of the New Statesman. Although in both his article and interview he failed to put forward a coherent alternative—other than to abstain from electoral politics and some idealist proposals linked to what he called the “spiritual revolution”—Brand has made a keen assessment of the state of things today, particularly for the youth. He acutely explained the cause of the 2011 London riots: “Those kids weren’t apathetic either. They felt impotent because they are given no status, structure or space . . . They may have been misdirected but they certainly had some vim. How beautiful it would be to see their passion utilized and directed at the source of their grievances.”

On the heels of Russell Brand’s interview, social media sites were all abuzz with a two-year-old video of Matt Damon—star of Elysium, a film depicting a not-so-distant and not-so-alien future of social inequality—reading Howard Zinn’s 1970 speech The Problem is Civil Obedience. Also making its rounds on the web was Donald Sutherland’s interview with the Guardian to promote The Hunger Games: Catching Fire, yet another film depicting a dystopian society of social inequality.

“Hopefully they will see this film and the next film and the next film and then maybe organize. Stand up,” Sutherland said of today’s youth. Given Donald Sutherland’s political past, this statement seems more sincere than simple promotion for The Hunger Games sequel. He spoke more of the film, “It just puts things out in the light and lets you have a look at it. And if you take from it what I hope you will take from it, it will make you think a little more pungently about the political environment you live in and not be complacent.”

When asked if he despairs the young, Sutherland replied, “No, no, no. Otherwise there would be no point making this film. I have great hope and faith in them.” Russell Brand also has an optimistic view: “there’s gonna be a revolution, it’s totally going to happen. I ain’t got even a flicker of doubt. This is the end. This is time to wake up.”

While these celebrities have very confused political ideas, they are undoubtedly a reflection of a sentiment that is no longer confined to a small layer of the population. A recent Gallup poll found that a record 42% of Americans identify as independents, while only 25% and 31% identify as Republicans and Democrats respectively. Consciousness lags behind events but consciousness, dialectically, can catch up with a bang. Occupy was one such bang. Although limited in its scope, it placed economic disparity front and center.

Today we are seeing the beginnings of a movement of young workers in retail, fast-food, and other industries getting organized in their fight for higher wages. According to the US Labor Department, the number of college graduates working minimum wage jobs doubled to 284,000 since the recession, while those in occupational programs or with associates degrees has more than doubled. 2012 graduates entered a job market that leaves them with no way to pay off their average $29,400 of student loan debt.

Such are the conditions today that Pope Francis felt compelled to lay criticism at the capitalist system, prompting the reactionary clown, Rush Limbaugh, to brand his ideas as “pure Marxism.” The new normality that the capitalist class is seeking to establish through attacks in our standard of living is preparing the ground for an explosion in the class struggle. A movement which will find the youth fighting on the front lines in a way that would please, but perhaps surprise, folks like Sutherland and Brand. Yes, the youth and workers will organize and fight back, but their victory hinges on their ability to find a clear, revolutionary program to organize behind. Like nature, politics abhors a vacuum, and under revolutionary conditions the Marxists can play the pivotal role. But we must prepare in advance as any number of accidental celebrity figures can fill the void, and heaven help us should that happen.