September’s dramatic strike of 24,000 members of the Chicago Teachers Union may prove to be a turning point in the struggle of public sector unions in the United States. Just months after the mass movement in Wisconsin was derailed into a recall, the teachers’ struggle should serve to galvanize organized labor and embolden unions nationwide to take more militant action in their self-defense against capitalist austerity. 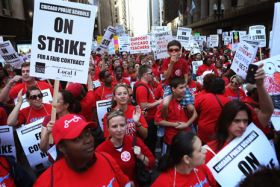 The strike lasted only seven days, but that was enough to wrench many important concessions away from Democratic Mayor Rahm Emanuel and his hand-picked school administration. Among these were a decreased reliance on standardized testing in teacher evaluations (a key issue for Emanuel and his corporate handlers), an improved teacher seniority system, and a pledge to hire 600 new teachers for art and music programs. Additionally, the union held the line on the pay structure and scheduled raises, and also forced Emanuel’s proposal for “merit pay” (a scheme to divide the union into competing strata based on testing results) off of the table. None of these important achievements could have been won without the strike. Emanuel had long championed “reforms” as a means to break the power of the union—in the end it was this power which broke Emanuel’s ability to implement them.

However, the strike did not win everything it set out to achieve. For example, one of the promises won was a commitment to hire more nurses, social workers, and support staff across the school district—should enough funding be available. In the context of the crisis of capitalism, it is unlikely the resources will be found, thus leaving teachers and students to cope without these vital services. Other concessions and give-backs may have also been included in the contract.

Given that this was a strike by just one sector of Chicago’s workers—it was not a city-wide general strike or even a strike of all public sector workers—these limitations are to be expected. Nonetheless, the CTU’s struggle shows that, when mobilized and organized, labor can resist and even push back against the attacks of the ruling class and their twin political parties.

By all accounts, the strike was vibrant, energetic, broadly supported, and militant. In addition to well-staffed and energetic picket lines, the union organized daily marches through the city, large rallies, and pickets of City Hall, politicians’ homes, and the offices of corporations who support Emanuel’s crusade against public education. Vitally, the picket lines and demonstrations also included a highly visible presence from students, parents, community members, and members of other unions.

Polls showed that 55% of Chicago residents approved of the strike, and that 53% blamed either Emanuel or the school board for forcing the teachers to walk out. Notably, support for the strike stood at 63% among blacks and 65% among Latinos, two demographics which the right-wing “reformers” often claim are most opposed to the teachers’ unions. Organized labor stood strongly with the teachers, with school janitors belonging to SEIU Local 1 threatening to refuse to cross picket lines if the strike wore on; the Teamsters allowing their offices to be used as a strike headquarters; and a prominent showing of contingents from numerous unions on the pickets and demonstrations.

Without this broad network of support—the product of more than a year’s worth of preparatory outreach to the community—the union would have faced a steep uphill battle and the strike probably would not have been viable. By appealing to the wider working class—parents, teachers and the overwhelming working class majority in the communities the Chicago Public Schools serve—the CTU countered the “divide and rule” tactics of Emmanuel and the Democratic Party “reformers.” This is a lesson that must be absorbed by every public sector union!

The bosses, their media, and their politicians demagogically frame their attacks on public sector unions as a means of saving “taxpayer” money, “improving efficiency,” and ensuring “accountability,” which are powerful arguments in the minds of workers tired of paying a higher effective tax rate than the rich while getting little in return.

In this case, the union effectively combated that message by correctly laying the blame for Chicago’s educational problems at the feet of the rich. It is the miserable living conditions created by capitalism— poverty, hunger, chaos at home, crumbling facilities, and overcrowded schools—which make it incredibly difficult for so many working class children to learn at school. To spread this message, the CTU built and fostered connections with parents’ and community organizations across the city, which played a vital role in building public support for the union.

The Democratic Party continued to play a hypocritical role during the strike and in the period leading up to it, once again confirming its role as the “left boot” of the bosses. During the Democratic National Convention, which took place a week before the teachers walked out, Emanuel was featured as a speaker and delegates were shown the anti-teacher, anti-union film Won’t Back Down, which was also played at the Republican National Convention a week earlier. On the eve of the strike, 32 of Chicago’s 50 City Aldermen (all Democrats) signed a letter opposing strike action, provoking demonstrations outside of some of their homes. The day after the strike began, Emanuel indicated in a speech that President Obama stood with him, saying “I want you to understand, the president has weighed in…. Every issue we’re talking about regarding accountability of our schools, quality in our schools to the education of our children, is the core thrust of [the Obama Administraton’s]Race to the Top.”

For their part, Mitt Romney and Paul Ryan were effusive in their praise for Emanuel, in spite of the rhetoric and mudslinging of campaign season. This is just another example of the Democrats and Republicans standing shoulder to shoulder in their war against the working class and organized labor. To combat them, workers must also stand shoulder to shoulder!

One CTU Delegate, Debby Pope, put it this way: “We say no, teachers are not the root of the problem. The root of the problem is the way capitalism is destroying public schools.” This kind of message is exactly what is needed for public sector workers in order to fight budget cuts and other forms of austerity! The logic of austerity and cuts under capitalism works like this: once the big banks and corporations go bankrupt, the federal and state governments bail them out either by directly giving them funds, or by sliding back or completely eliminating what they pay in taxes. We, the working majority, are then presented with the bill for these bailouts through cuts in funding for education, health and other social services.

As long as the leaders we elect in the unions accept this logic, they will tell us the cuts are “inevitable.” Only by breaking with the twisted logic of capitalism can workers in the public and private sectors fight back, like the CTU has done. In its place, what is needed is a “logic of class struggle.”

National leaders of the American Federation of Teachers (AFT, which the CTU is affiliated with), such as Randi Weingarten have capitulated to the ideas pushed by the school-privatizing “reformers.” They accept the ruling-class lie that teachers are “part of the problem” and must therefore not put up a fight to defend public education. This approach can only lead to a dead-end for teachers. The CTU was able to put up the fight it did in Chicago, despite the policies of the national AFT leadership, due to the immense pressure of the teachers from below, organized around the Caucus of Rank-and-File Educators (CORE).

Based on the success of the CTU in holding back Emanuel’s attacks, CORE could and should build itself into a national, AFT-wide current, with organizing and broadening the fight against cuts and austerity as its top priority. Building on the successful fight back in Chicago, this would serve as an example to the rank and file in every union in the country.

However, in order to fight cuts in the long term, it is necessary to break with the logic of capitalism and adopt a class struggle viewpoint. One important step in this direction would be a clean break with the parties of big business. It is not enough to defeat Emanuel and the Democrats at the workplace—they must also be defeated at the polls! Just as it was necessary for CORE to run a slate of candidates to turn the local union around to fight cuts, we need a labor party that fights in the interests of the working class as a whole if we are to defend and expand public education.

Imagine if the CTU were to run independent labor candidates for the Chicago city council, school board, and mayor. Imagine if the CTU built on the huge amount of public support it got from the working majority in Chicago to run candidates campaigning on a platform to defend education and other public services, and demanding that the rich pay the bill for the crisis. Such a campaign would be the beginning of a huge shift to the left in politics not just in Chicago, but statewide and nationally.

Such candidates, once in office, could mobilize the working class to reverse the decades of counterreforms, school closings and charter schools, and rebuild quality public education. With the victory of the Chicago teachers over Rahm Emmanuel, such a campaign is a real possibility. It is only necessary for CORE to take steps in that direction. This is the only way forward for workers in the U.S. The continuing crisis of capitalism will force the working class back onto the offensive and pressure will continue to build inside the unions for a class struggle leadership and for a mass party of labor.