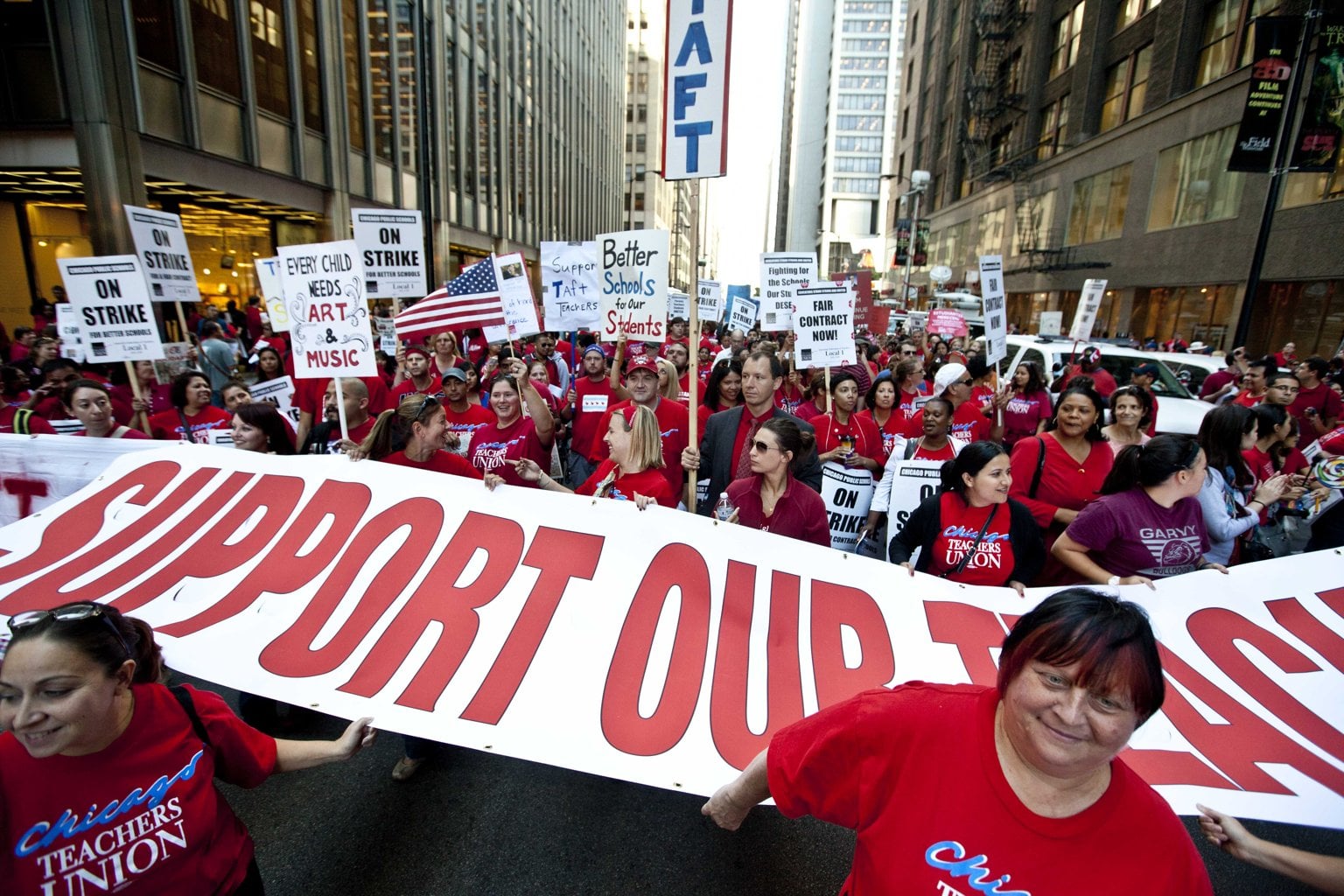 The Democrats’ bill, “Race to the Top,” doubled down on standardized testing, and these have been used by Democratic Mayor of Chicago Rahm Emanuel as justification for closing down 48 schools in the city in 2013, thus allowing for an explosion of charter schools, many of which are for-profit, and very few of which actually perform better than public schools. Now, Republican Illinois Governor Bruce Rauner has cut funding for Chicago Public Schools (CPS) in an attempt to push for a state takeover of the district, which would, of course, mean more cuts. The CTU’s fight back against these attacks has been long and hard. There was a major strike in 2013, many teachers refused to administer standardized tests in 2015, and this year, on April 1, the CTU went on a one-day strike, holding events across the city.

Due largely to Rauner’s withholding of funds, CPS now faces a $1.1 billion budget shortfall. Of course, we can look at the $531 million in corporate subsidies Illinois paid to Sears Holdings, and billions more paid to other companies, as money that could have been spent on schools. But the state budget is only a small part of the issue. The main problem, from the point of view of the capitalist class, represented in this instance by Emanuel and Rauner, is that public education is a giant industry which turns no profit for capital. Quality of education, unfortunately, does not enter into the calculus, unless a poorly devised standardized test can be used as a battering ram against teachers. Chris Whittle, CEO of Edison Schools, a for-profit charter school provider, provides a basic model budget for for-profit schools in his book Crash Course, which includes a built-in 10% profit. Following this model, Chicago Public Schools alone would generate more than $500 million in annual profits for the capitalists who succeed in taking it over. Knowing that this kind of money is at stake, it is no wonder why the attacks on teachers and students have been so vicious.

The CTU has steadfastly fought this massive onslaught and corporate takeover of their schools. As teachers who are committed to ensuring their students attend quality schools, they have taken many measures to fight back. Decried as illegal by CPS bureaucrats for technical reasons, the CTU claims they had legal justification for the April 1 strike due to the refusal of CPS to pay steps and lanes increases (raises based on experience and education). And while this was the spark of the strike, it quickly assumed the character of fighting against the generalized attacks on CPS workers and austerity in Chicago generally. Broad public support backed up the teachers, evidenced by the many people who attended their rallies, as well as a poll showing 73% of CPS parents fully support the CTU. Further, the struggle was broadened even further when dozens of other organizations joined the day of action, including Fight for $15, which staged a walkout at several fast food restaurants.

The CEO of Chicago Public Schools, Forrest Claypool, criticized the strike saying, “It is disappointing to see the CTU’s leadership is promoting an illegal strike that would take a critical day of instruction away from our students.” Of course, this is the same person who approved three furlough days this school year which shut down schools as a cost saving measure. This individual’s shameless hypocrisy is starkly indicative of the entire approach of the political establishment to education. The Chicago Network of Charter Schools chimed in as well, criticizing the CTU as “being first and foremost a political organization that willingly sacrifices the needs of Chicago’s children.” The entirety of the CNCS’s existence is that of a political organization, and it operates solely to put the interest of charter schools ahead of the “needs of Chicago’s children.” In this world of double standards and doublespeak, the teachers shutting down school for a day in an effort to save the school is labelled as something beyond the pale, whereas the bureaucracy shutting the school down for three days is sound public policy. And just how is the permanent closure of dozens of schools good for children’s education?

Due to illness, CTU leader Karen Lewis was unable to run against Emanuel for mayor in the last elections. Chicago workers must continue to organize, lay the foundations for running an independent labor candidate against Emanuel as well as against Rauner at the state level. This can spark a major break from the parties of big business for the labor movement across the country. Teachers have been a bulwark against attacks on children in the age of austerity, and now this movement can and must spread to the political arena. The fight against cuts in education is inseparably linked to the struggles against mass incarceration, low wages, high rent, and police violence. These problems all have a common root: the for-profit capitalist system and its representatives in the Republican and Democratic parties. We must fight with the CTU, fight for a mass socialist party based on the working class, and fight for a socialist revolution.