The Class Struggle In America Heats Up 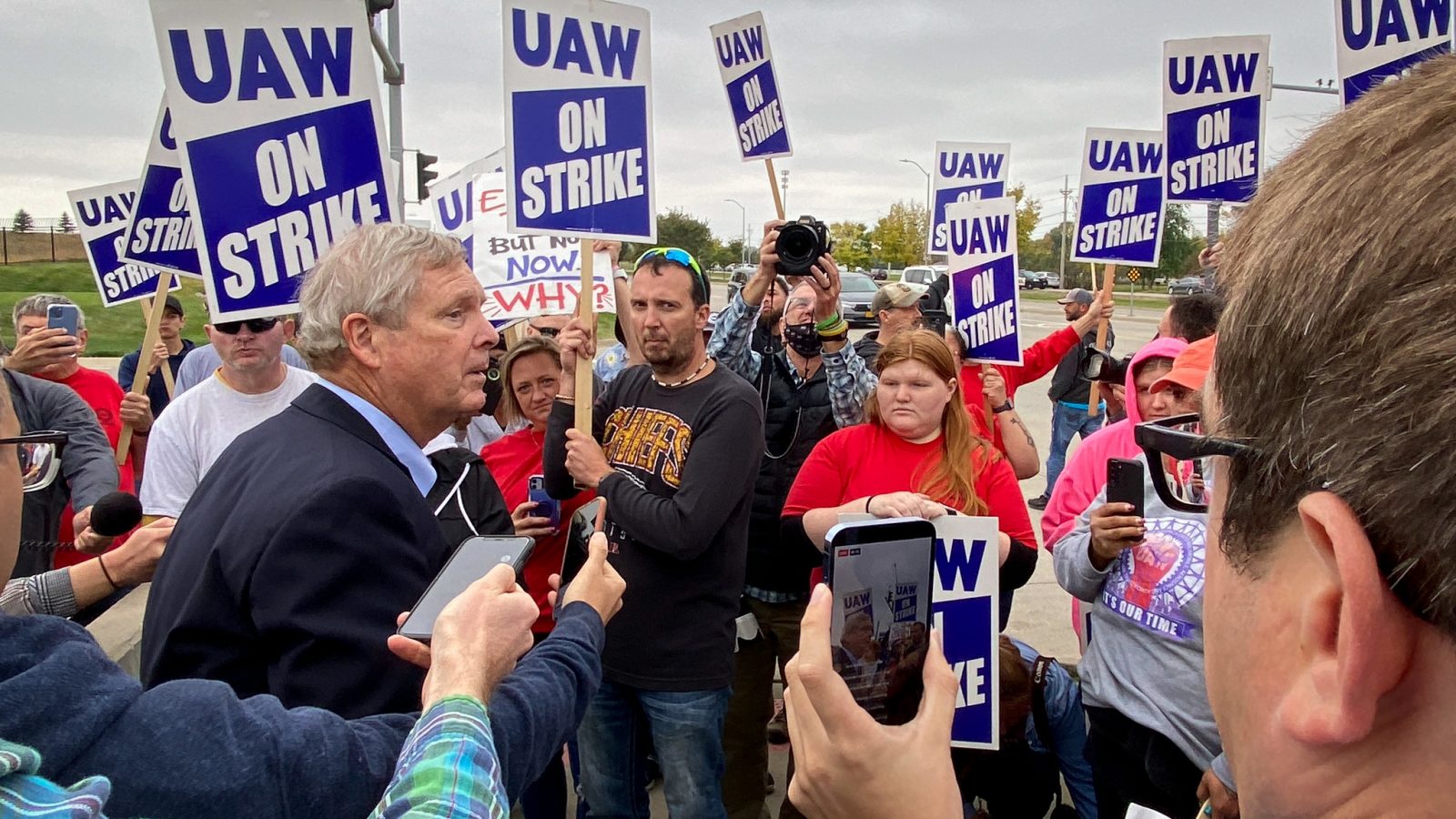 Editorial for issue 29 of Socialist Revolution magazine. Subscribe now to get your copy!

The American ruling class is sitting on a societal volcano of Biblical proportions. Given the organic crisis of their system, the capitalists can no longer maintain any semblance of economic, political, or social equilibrium. After nearly two years of unprecedented economic dislocation, a plurality of Americans believe the economy is the most pressing issue facing the country. Inflation has risen 6.2% over the last twelve months, the stimulus money has evaporated, and millions of Americans are again forced to use their credit cards to make ends meet. Household debt stands at a record $15.24 trillion, up 1.9% over just three months. Little wonder only 15% of Americans strongly approve of the job Biden is doing, down from 34% in April.

Just months into his administration, there is already talk of a “lame-duck president” and “failed presidency.” Far from “transformative,” Scranton Joe and the “lesser evil” have once again delivered more of the same. This is the disaster that passes for politics in the United States. As the New York Times recently put it, the US is in “a national funk that has pummeled Mr. Biden’s approval ratings and fueled a backlash against Democrats that could cost them control of Congress in next year’s midterm elections.” According to a 65-year-old Floridian interviewed in the article: “our political system—it’s almost completely a failure. I don’t see it getting better at all.”

After decades of two-party political ping-pong, patience has worn thin. The American working class is pragmatic above all else, and when it comes to presidential popularity, the proof of the pudding is always in the eating. You either deliver the goods, or you don’t. Biden has quite literally not delivered the goods after overpromising an end to the pandemic and a return to normalcy and prosperity.

The ravings of Fox News notwithstanding, however, the fault does not lie with Biden as an individual. The crisis of his presidency is ultimately a function of the dysfunctional, sclerotic system he and his party represent: capitalism. The irony is that in the midst of a crisis of productive overcapacity—which is overproduction of the means of production—there is simultaneously a crisis of underproduction in many industries due to the overall inefficiencies of a profit-based system that cannot rationally coordinate all the moving parts.

Despite his failures and betrayals, Barack Obama was granted a prolonged honeymoon and was reelected for a second term. This was for various reasons, including the fact that there was no fire-eating alternative waiting in the wings. Today, however, the specter of the 45th President of the United States is lurking just off Biden’s stage. Trump may well be a reactionary, a misogynistic, racist, billionaire piece of human trash—but he is seen as a scrappy risk-taker, a bold and aggressive outsider-underdog who gleefully gives “the swamp” of both parties the middle finger.

This is light years away from the defeatist attitude of the labor leaders and the so-called “left.” By contrast, Trump inspires a fighting confidence among a hefty section of white workers, both union and non-union. In the rust belt and rural areas, millions of former Democrats feel deeply alienated and abandoned by the liberal capitalists. With slogans such as “We, the People are pissed off,” the far right has successfully tapped into this anger while simultaneously blurring the line between the working class and the enraged petty bourgeoisie.

As for the liberal-reformist “socialists” in Congress, they too blur the class line and have no confidence in the working class or the possibility of fundamental change in our lifetime. As a result of their craven excuses for Biden, the Democrats, and the inherent limitations of capitalism, they can only discredit the word “socialism.” The transformation of class consciousness is not simple and mechanical, but contradictory and dynamic. And if so-called “socialism” fails to offer a way out, the pendulum will inevitably, though temporarily, swing the other way. Nature abhors a vacuum, and the political vacuum is being filled at present by the far right.
However, “Trumpism versus liberalism” is a false dichotomy and must be rejected in favor of a class analysis. Both major parties represent the interests of the capitalists, not the workers. Tied as they are to capitalism, the liberals cannot meet the needs of the workers. For this same reason, however, Trump’s right-populist demagogy can’t solve their problems in the long run either. The only way to break Trump’s grip on the minds of millions of desperate and confused Americans is with a bold, fighting program and party that addresses the majority’s demands on a class-independent basis.

With no viable working-class alternative ready to fill the void, another term of the “school of Donald Trump” may be required after the current “school of the Democrats” to make the need for class independence clear in the eyes of millions. If Trump or a similar creature does make it back into the White House, we can anticipate a period of intense protests, mass movements, and social explosions, providing many opportunities to build the forces of revolutionary Marxism.

Already, young people in particular are abandoning the major parties in droves. In Virginia, just 10% of voters under thirty even bothered voting in the recent gubernatorial election, with a similar collapse seen in California as well. Just 24% of voters under thirty consider Biden “honest and trustworthy.” Though it is impossible to predict what non-linear form the process will take, sooner or later, the class issues will come to the fore, both parties will be abandoned en masse, and a new mass workers’ party will emerge.

Blocked from meaningful change on the political front, hundreds of thousands of American workers have gone on strike or approved strike action in the most significant wave of industrial action in years. From John Deere to Kellogg’s, Nabisco, Kaiser Permanente, and Hollywood; from nurses to coal miners, carpenters to teachers, steelworkers, transit, and sanitation workers; from New York to California to Alabama, Oregon, Minnesota, Illinois, Connecticut, West Virginia, North Carolina, and beyond, this is just the tip of the iceberg of struggle as the systemic crisis of capitalism forces workers to band together to defend their lives and livelihoods.

The spirit of struggle and sacrifice of the American working class is an inspiration—but how can workers not only fight but win? Building solidarity with the broader working class is an essential component for weathering the bosses’ onslaught. But the first requirement for a successful strike is recognizing that the interests of the bosses and the workers are irreconcilably opposed. Everything else flows from this basic fact. Only militant, class-struggle methods that effectively shut down production can win serious victories for the workers. Informational picket lines and respect for court injunctions that allow operations to continue through the use of management and scabs do not win strikes.

Unfortunately, the current labor leadership is an objective barrier to a broad and victorious labor offensive. The revolutionary fighting spirit of the early pioneers of the American labor movement has never burned in the hearts of these professional apologists for class collaboration. Along with their cynical pessimism and legal cretinism, they are imbued with an almost superstitious awe for the allegedly insurmountable power of the capitalists, their laws, and politicians.

Inertia and the authority that comes with leadership also play a role. However, perhaps the most decisive element in the tangled web of labor control is the unions’ subservience to the Democratic Party. By lashing the workers to one of the main parties of the enemy class, the intent is to keep the workers’ anger within safe limits for capitalism. For decades, the bosses and labor leaders have conspired to deny the majority class an independent political expression of its own. But experience is a harsh and effective teacher. Millions of workers have already broken with this pernicious shell game. Lacking a viable alternative, many have fallen into the poisonous trap of Trumpism, but they will eventually learn that this is a dead-end as well.

Does the role played by the current labor and left leadership mean we don’t need unions, leaders, or political parties? Not at all. What we need are class-struggle unions, class-struggle leaders, and a class-struggle mass political party. We need unions committed to shutting down production if forced to strike, leaders who combine industrial action with political struggle, and a fighting party that operates on the basis of absolute class independence and a vibrant internal democracy.

We stand at the beginning of the beginning of a labor revival with the potential to upend the parameters of the class struggle we’ve been forced to endure over the last few decades. However, the working class can break through the societal logjam only by breaking with the abomination of cross-class “coalitions” at the workplace and in politics. Success will require clear ideas, organization, and tenacity. The IMT is building the first nucleus of a future revolutionary leadership and bringing these ideas into unions and movements around the country. We invite you to join us in this effort.