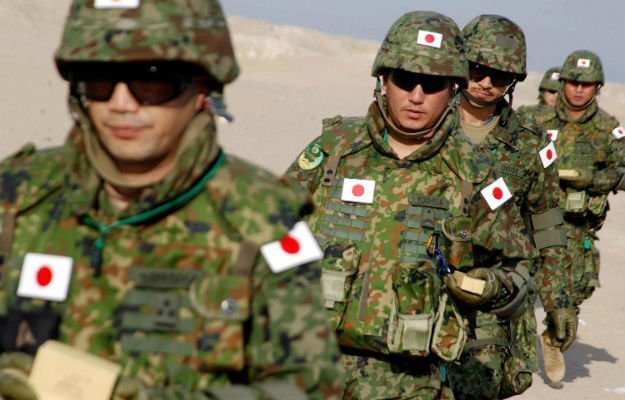 Japanese society is in a deep crisis. After decades of economic stagnation, the political elite is making desperate attempts to revive the economy, at the same time as attempting to whip up anti-Chinese nationalist sentiment to shore up support. Yet, the recent mass movement against the reinterpretation of the so-called “pacifist clause” shows that the political system is reaching its limits.

The postwar regime in Japan is crumbling, with tax hikes, end to lifetime employment, and tax cuts for the corporations. The remilitarization is only another nail in the coffin of the postwar settlement. Turnout in elections has dropped from 69% to 53%, which is a sign of the mass disillusionment with bourgeois politics. At the same time, the Communist Party doubled its share of the vote in the election last year to 13%, adding another 2 million votes. The stage is being set for revolutionary convulsions in Japan, and the movement against the changing of the pacifist clause is only the beginning.

“Aspiring sincerely to an international peace based on justice and order, the Japanese people forever renounce war as a sovereign right of the nation and the threat or use of force as means of settling international disputes. To accomplish the aim of the preceding paragraph, land, sea, and air forces, as well as other war potential, will never be maintained. The right of belligerency of the state will not not be recognized.”—Article 9 of the Japanese constitution

After the horror of World War II, pacifism was forced onto the Japanese people at gunpoint. The US wished to eliminate the threat of an independent military power in the Pacific, and it seized the opportunity presented by victory to dismantle the Japanese military and write a repudiation of force into the Japanese constitution. It soon came to regret this, however. Pacifism gained support among the Japanese population, who saw it as a means of redirecting the money spent on military affairs to socially useful tasks. Cold War geopolitics forced the US into the position of bearing the cost of defending Japan.

As memories of world war began to fade, the need to counter China and the Soviet Union in the region increased, and as the potential profits of a Japanese military became apparent, the ruling class of both the US and Japan began to look for ways to remilitarize the Japanese state. This project has not gone unopposed. While Japan has had a de facto military in the form of a “self-defense” force since 1954, Japan has only been able to take part in UN “peacekeeping” missions since 1992, and only since 2004 has the country taken part in the support aspects of such missions. All of this is taking place in the context of the decline of US imperialism, while competition with Chinese imperialism for regional influence is rising. The US needs Japan’s help in holding off Chinese expansion at the same time as the Japanese bourgeoisie no longer feels that the US is capable of defending its interests.

Nonetheless, despite this creeping militarization, and Prime Minister Abe’s best efforts, Article 9 isn’t going to be revised anytime soon. The Japanese proletariat is committed to defending what they view as Japan’s “pacifistic constitution” and, in doing so, have revived memories of the 1960 struggle against Japan’s security treaty with the US, which ceded Japanese land for US military bases.

The people of Japan are not interested in engaging in imperialist adventures on behalf of the Japanese bourgeoisie and their US allies. The past imperialist adventures of the Japanese bourgeois did not end well, with 3 million dead in World War II, and massive atrocities committed in China and Korea. To add insult to injury, the rearmament program will cost no less than $240bn, at the same time as the government is meting out austerity on the poor.

To get around this popular opposition, Abe has launched a campaign to reinterpret the constitution by introducing the idea of so-called “collective self-defense,” which allows Japan’s self-defense force to take part in operations to “defend” its allies—rather than merely protecting Japanese territory—and sanctions the sale of weapons to foreign powers. The measure is deeply unpopular in Japan, and there is widespread agreement among legal experts that it is unconstitutional in its fundamentals. But with a stagnant economy, growing social discontent, and highly lucrative weapons sales in the offing, even the basic democratic right of deciding whether or not the people of Japan wish to alter their constitutional system has been thrown out the window.

Pacifism in Japan was the product of the balance of forces after World War II with the Chinese Revolution and the rise of the Soviet Union. It was not by a sudden change of heart by the Japanese ruling class. Wars and militarism are not caused by shifty politicians lacking a “commitment to peace,” but by real contradictions in economic and social development. Abe’s maneuvers are merely an expression of the needs of Japanese imperialism in this period. Militarism and imperialism cannot be separated from the capitalist system. They necessarily arise from it and can in the end only be eradicated when capitalism itself is abolished: To end war we have to end capitalism! This movement shows the first cracks in the regime, and prepares the way for a struggle, not just against imperialism, but against capitalism itself in one of the system’s key bastions.