Education in Crisis in California 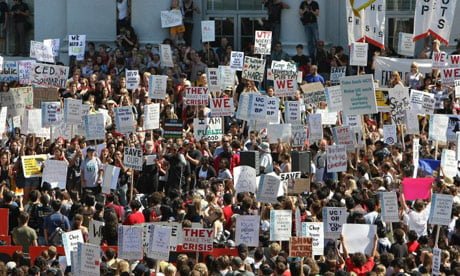 The state of education in California has been in constant decline. In the past few years, the Democrats have been scrambling for some kind of solution, but they have nothing to offer students and working people. Ultimately, there can be no real solution to the problems of education within the narrow confines of the capitalist system.

The Little Hoover Commission, a watchdog agency, published a report outlining the crisis in higher education called: “A New Plan for a New Economy: Reimagining Higher Education.” It hearkens back to the “good old days” when California was a leader in education. They’re calling for the creation of a new Master Plan, a document written in 1960, which, among other things, granted tuition-free education to qualifying in-state students.

But the situation in the state is not what it was in 1960, at the height of the postwar boom. In the ‘60s, California’s per-pupil spending was ranked in the top 10, but the state now ranks in the bottom 10. The Commission estimates that “by 2025, California will need 2.3 million more graduates who have earned a certificate or degree than it is on track to produce today.” In order to achieve this, the graduation rates will have to increase by at least 40%. If this is not met, there will not be enough graduates to sustain a “healthy, modern economy.” Ironically, one of the reasons for the disinvestment of education is because capitalism only needs so many people with a degree; but now this has turned into its opposite and there will not be enough graduates to fill all of the positions that require degrees. In other words, the cuts of the last few decades now threaten the capitalists’ capacity to squeeze profits out of the workers. The report outlines many familiar problems and sums up simply that “Californians are not adequately served by the current system.”

Any solution within the narrow confines of capitalism will run into contradictions that it cannot resolve. As the report notes, “The state has finite resources for higher education. The state has to figure out a way to achieve better outcomes for more students without adding more money.”

Over the past few years there have been attempts at “fixing” higher education in the state. There were two competing ballot measures last year that would collect and allocate funding in different ways and to different institutions. Governor Brown’s Prop. 30 essentially issued an ultimatum to students and educators: if 30 didn’t pass, he threatened, there would be $6 billion cut from education. The proposal passed, but the gains were relatively small and likely short-lived. Governor Brown attempted to freeze tuition at both the University of California (UC) and California State University (CSU) systems last year, saying in a press release that, “California’s finances are in a very solid shape for the first time in a decade.” But now both systems are trying to pass their budgets for 2014–15 and the Governor has changed his tune, telling the UC Board of Regents that “we’re on track here for a gigantic tuition increase, or you’re going to have a big financial crisis.”

One assemblyman introduced the Affordable College Act, which would establish a “fast-track” from the high schools through the community colleges and into the state universities. Tuition would be frozen between $10,000 and $20,000, with graduation possible in as little as 3 years. While this would take some of the edge off for many students, it would serve only a small portion of the student population and would require the restructuring of the community colleges, which now primarily serve working and low-income students and those looking to obtain a certificate or gain skills for work.

Democratic Speaker of the Assembly and union organizer, John Pérez, introduced the Middle Class Scholarship Act, which aims to cut tuition by 40% for a portion of families making under $100–150,000 a year. This would undoubtedly represent a step forward, but it too can only go so far. Any solution that limits itself to the demands and constraints of the capitalist economy is not enough. There are many honest young activists that look to the Democratic Party for lack of an alternative, but ultimately, it is a bourgeois party and will be restricted to solutions within the capitalist system.

All of these Democratic Party initiatives only skim the surface. The problems of education can only be understood in the broader context of the crisis of capitalism. Without a serious analysis it is impossible to grasp at the root of the issue and understand how we can fundamentally change the education system.

The Crisis of Capitalism

The situation is very different from the late ‘50s and ‘60s when there was an influx in enrollment by veterans through the GI Bill and baby boomers leaving high school. The California government was able to expand funding and restructure its educational institutions on the basis of the postwar boom. Today, capitalism cannot even guarantee students employment after graduation. A new Master Plan would be great, but the original was rooted in a different set of historical and economic circumstances. It is entirely possible to solve the crisis of education—but not under capitalism. If the student movement is to tackle the problems of education, we will have to extend into the political sphere and to all sectors of the working class. The Democrats offer no real and lasting alternative, as the experience of California shows.

Administrators have been fond of using the economic crisis as a justification for cuts; but education was under attack long before the 2008 recession began. As a result, the accessibility and the price of education have been rising, while the quality has steadily been declining. Students are paying more for less. While there are more than enough resources to provide a free lifelong education to everyone, the Democratic Party has only continued the cuts and austerity nationwide.

In recent years, there has been a push towards online education as a cheap and easy “fix” to serve more students. But this alone cannot resolve the contradictions. For example, a series of basic courses offered by San Jose State University suffered from a failure rate of between 56 and 76%. The courses targeted working students and single parents, who have to prioritize between school, work, and their children. In addition, while there’s nothing inherently wrong with online education, as a general strategy for public education within the constraints of the capitalist system it means one thing for certain: even more education sector layoffs.

On top of this, decisions at the universities are made with little or no input from the faculty and student population. The CSU’s Board of Trustees held one-third of its meetings for the 2013 academic year without a representative from the faculty union. Faculty, students, and the broader working class should have more control over the decisions made in the higher education system. As one example, if the student movement links up with the unions they could fight for a labor party that could win demands that benefit workers and young people.

A mass labor party would fight against austerity and could put forward a serious alternative to the Democrats. Armed with a socialist program, labor could expropriate the commanding heights of the economy, and on this basis provide free, quality education to all. In the place of university bureaucrats and business interests, the workers and students would control education democratically. This would mean more faculty and staff to handle higher enrollment rates, more courses, and better facilities.

Under socialism, education would be part of bettering ourselves and bettering society as a whole. Learning would be set free from the narrow confines of the profit-makingneeds of big business, and society would be able to realize its full potential. As Marx explained in the German Ideology, “in a communist society . . . each can become accomplished in any branch he wishes, society regulates the general production and thus makes it possible for me to do one thing today and another tomorrow, to hunt in the morning, to fish in the afternoon, rear cattle in the evening, criticize after dinner, just as I have in mind, without ever becoming hunter, fisherman, shepherd or critic.”