Billionaire car company capitalist and verified Twitter-user Elon Musk, whose Wikipedia page mentions his childhood interest in computer programming but fails to mention the Zambian emerald mine his father once owned, recently betrayed his aversion to public transit in comments describing the experience of using it as, “like a bunch of random strangers, one of who might be a serial killer, OK, great.” Despite this, Musk wants to cash in on the next round of mass transit development. To this end, he founded a new infrastructure and tunnel construction firm, The Boring Company—the name refers to the boring of tunnels—and promises to deliver a “personalized mass transit” system.

The Boring Company website’s FAQ begins with this statement: “To solve the problem of soul-destroying traffic, roads must go 3D, which means either flying cars or tunnels.” Musk intends to build out a new series of underground transit channels by increasing the speed and reducing the costs associated with boring tunnels. Musk has promised via his Twitter account that “all tunnels & Hyperloop will prioritize pedestrians & cyclists over cars” and promised on his Instagram account that fares will remain lower than the cost of a bus ticket. Boring began construction of a “proof-of-process” tunnel underneath the SpaceX campus in 2017 which is now nearing completion. 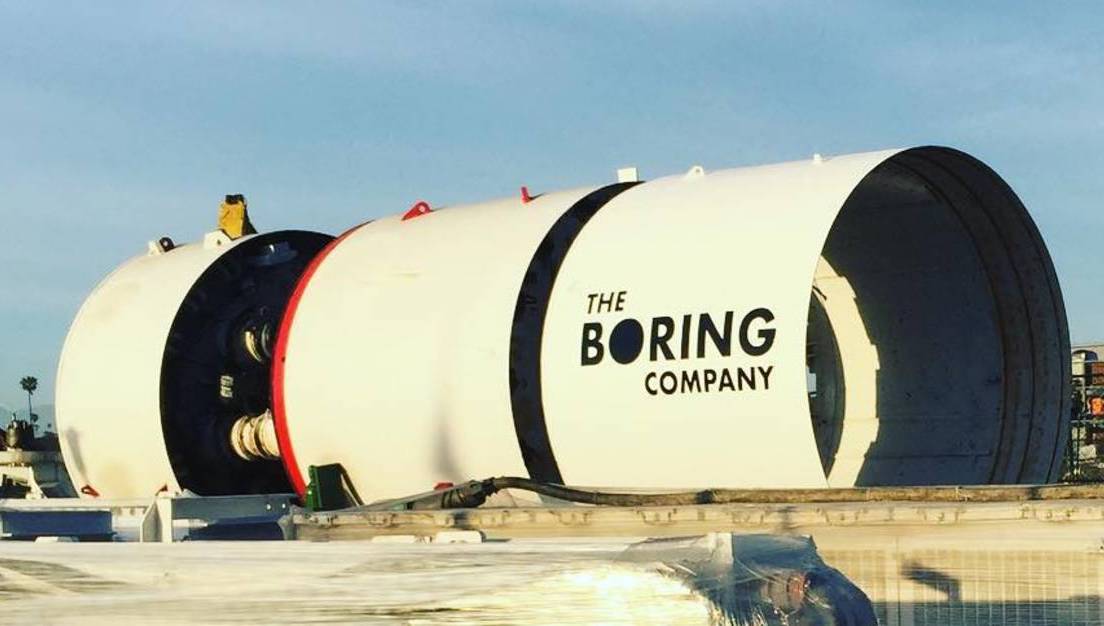 Musk wants to cash in on the next round of mass transit development “to solve the problem of soul-destroying traffic.”

In June, Chicago Mayor Rahm Emanuel announced the selection of The Boring Company to build a high speed transit line between downtown Chicago and the airport. Boring promises to foot the bill for the project and keep any revenues it generates. However, Musk has already received plenty of cash from the state; his wealth has grown partly on the basis of an estimated $4.9 billion in government subsidies, allowing the public to pump money into his firms without this investment resulting in any significant public ownership of the companies. Under capitalism, the state faces strict limits when it comes to effectively solving problems; even the expenditure of huge sums of public money ends up being captured by the likes of Musk and his class. We can expect forward-thinking vultures like Musk to reliably hover over problems that demand solutions—in the pursuit of vast corporate handouts. We cannot expect this class to solve any of our pressing problems any more effectively than Tesla has been able to deliver an “affordable, high volume car” on schedule.

Socialist Revolution has reported on Tesla’s efforts to suppress workers’ efforts to unionize to improve the terrible conditions they often work under. In May, Tesla announced it would be locking out contract workers unless they had a permanent employee who would vouch for them, “putting their reputation on the line.” Musk referred to this process as “barnacle removal.” He is proactively suppressing any incipient solidarity among his workforce, as any strikes or moves towards democratic workers’ control would present a dire threat to his profits and class. Marxists support the unionization of all workers at Musk’s companies, and call for the expropriation of his firms’ resources, to be used to implement a socialist solution for public transit.

Another firm attempting to profit from reimagining transportation, Uber, loses hundreds of millions of dollars each quarter as fares are subsidized by investors in an attempt to push the competition to the point of failure. To become profitable, Uber’s fares will eventually have to increase. Tesla’s lack of profitability has been tolerated by investors so far, as financial losses are often absorbed in the short term in the hopes of eventually shocking systems into new and more profitable patterns. This kind of investment is the mirror image of austerity. As the ruling class systematically defunds and dismantles public services, they prepare to reap the proceeds of rebuilding them on a for-profit basis. This is a recipe for the reactionary unmaking of public life—and the working class will have no alternative but to fight back.

Austerity is leaving public transit systems in a critical condition while the state subsidizes private development.

The United States has gone through several cycles of transportation infrastructure improvement driven by the needs of the capitalist class. In every instance, the social costs of development were borne disproportionately by the poor and oppressed. One of the principal economic projects of the 1800s was the construction of rail lines connecting the coasts and population centers of North America. The completion of the railroad involved the military intervention of the US Army and drove the escalation of the Indian Wars and the near extinction of the bison, the economic basis for the Plains Nations’ existence. In the 20th century, urban planners such as Robert Moses played a leading role in the reimagining of American cities and transportation. Their vision helped cement the individualist car-centric model embraced across the US, and included the deliberate wholesale demolition of many black neighborhoods, entrenching racial and economic segregation into the physical fabric of the American landscape.

“Soul-destroying traffic,” like the rest of the soul-destroying effects of capitalism, can’t be solved by another round of capitalist development. Boring’s attempts to “vertically integrate the whole process of boring a tunnel” should give its workers a rich start in the process of democratizing transit development once they help the broader working class liberate this capital from Elon Musk’s control, which, to paraphrase Lenin, is an ill-fitting shell that no longer fits its contents.