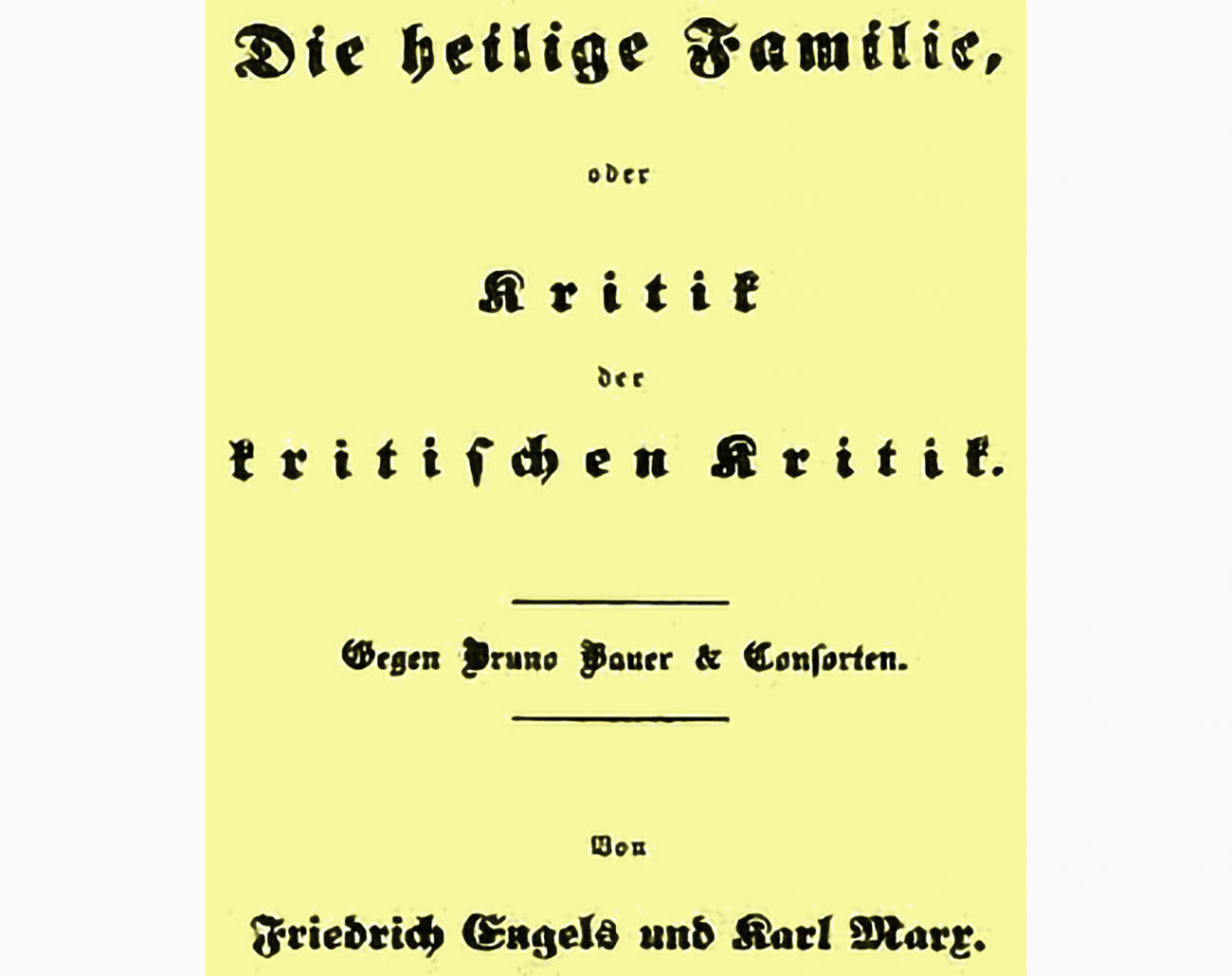 The below text is a chapter extracted from The Revolutionary Philosophy of Marxism, a selection of writings on dialectical materialism published by Marxist Books.

Marx wrote The Holy Family in 1844—his first collaboration with Friedrich Engels—as part of the process of working out their ideas on philosophy and communism. This amalgamated excerpt from the August 1923 issue of Labour Monthly provides a compact overview of the development of materialism, comparing its British and French variants, and connecting this with the rise of utopian socialism.

French materialism of the eighteenth century exhibits two currents, one having its origin in Descartes, the other in Locke. The latter exercised a dominating influence on the French mind and led directly to socialism. The former, the mechanical materialism, dominated French science. Both currents crossed in their courses…

But the man who destroyed the credit of the metaphysics of the seventeenth century was Pierre Bayle. The negative refutation of theology and metaphysics, however, sharpened the desire for a positive, anti-metaphysical system. And it was Locke who supplied it. His Essay Concerning Human Understanding came in the nick of time for the other side of the Channel. It was enthusiastically acclaimed as a long-expected guest.

Materialism is the born son of Britain. Even one of his great schoolmen, Duns Scotus, asked himself “whether matter cannot think.” In performing this wonder, Duns had recourse to God’s omnipotence, that is, he made theology itself preach materialism. He was, moreover, Nominalist. Nominalism is one of the main elements of the English materialists, as it is indeed the first expression of materialism in Christian Europe.

The real progenitor of English materialism is Francis Bacon. Natural science is to him the true science, and sensuous physics the foremost part of science. Anaxagoras with his homoimeries and Democritus with his atoms are often his authorities. According to Bacon, the senses are unerring and the source of all knowledge. Science is experimental and consists in the application of a rational method to sensuous data. Observation, experiment, induction, analysis, are the main conditions of a rational method. Of the qualities inherent in matter the foremost is motion, not only as mechanical and mathematical motion, but more as impulse, vital force, tension, or as Jacob Boehme said, pain of matter. The primitive forms of the latter are living, individualizing, inherent, and essential forces, which produce specific variations.

With Bacon as its pioneer, materialism contains in a naïve manner the germs of universal development. Matter is still smiling upon us in its poetic-sensuous charm. The aphoristic doctrine, on the other hand, teems with theological inconsistencies.

In its further development, materialism becomes one-sided. Hobbes is the systematizer of Baconian materialism. Sensuousness loses its bloom and is turned into the abstract sensuousness of geometry. The physical motion is sacrificed to the mechanical and mathematical one. Geometry is proclaimed the cardinal science … Materialism is rationalized, and it develops also the ruthless logicality of reason. Hobbes, starting from Bacon, argues that if all knowledge is supplied by the senses, then … only the corporeal is perceptible and knowable, therefore we can know nothing of the existence of God. Only my own existence is certain … Hobbes systematized Bacon, but did not establish the main principle, the origin of the ideas and knowledge of the sensuous world.

It was Locke who accomplished that work in his Essay Concerning Human Understanding.

If Hobbes removed the theistic prejudices from Baconian materialism, Collins, Toland, Coward, Hartley, Priestley, etc. broke down the last theological barrier of Locke’s sensualism. Theism is, for those materialists, merely a comfortable, lackadaisical way to get rid of religion…

The direct French disciple and interpreter of Locke was Condillac, who pitted Locke’s sensualism against the metaphysics of the seventeenth century. He published a refutation of the system of Descartes, Spinoza, Leibniz, and Malebranche. In his Essay on the Origin of Human Knowledge he follows up the ideas of Locke and argues that not only the mind, but also the senses, not only the capacity for forming ideas, but also the capacity for sensuous perception, are a matter of experience and habit. On education and external circumstances depends the whole development of man.

In Helvetius, who likewise starts from Locke, materialism receives its proper French character. He envisages it in relation to social life. The sensuous qualities and self-love, enjoyment, and the well-understood personal interest are made into the foundations of morality. The natural equality of the human intelligence, the harmony between the progress of reason and the progress of manufactures, the natural goodness of man, the omnipotence of education, are the main points of his system …

It needs no special ingenuity to discover in the doctrines of materialism—concerning the natural goodness and the equal mental endowments of man, the omnipotence of experience, habit, and education, the influence of external circumstances on man, the great importance of manufactures, the legitimacy of enjoyment—the necessary connection with communism and socialism. If man receives from the external world and from his experience in the external world all his feelings, ideas, etc., then it is evidently our business to reorganize the empirical world in such a manner that man should only experience the really humane and acquire the habit of it. If the well-understood personal interest is the principle of all morality, then we must arrange society in such a manner as to make private interest fit in with social interest. If man is subject to the same laws as nature: if man is not free in a materialistic sense, that is, he is not free to do this or to avoid that, but that he is only free to assert his true individuality, then there is no sense in punishing the criminal, but we must rather destroy the antisocial breeding-places of vice and to allow to everybody social scope for his activities. If man is formed by circumstances, then we must humanize the circumstances. If man is social by nature, then man develops his true nature in society only, and we must not measure the power of his nature by the power of a single individual, by the power of society.

These and similar views we find even literally in the works of the older French materialists. It is not the proper place here to sit in judgment upon them. Characteristic of the social-critical tendency of materialism is Mandeville’s apology of vice. Mandeville, one of the earlier followers of Locke, demonstrates that in the present-day society vice is indispensable and useful. This was by no means an apology for present-day society.

Fourier starts directly from the doctrines of French materialism. The Babouvistes were raw, uncivilized materialists, but also the more advanced communism is based on French materialism. The latter, in the French garb, returned to its native country. Godwin and Bentham established their systems on the ethical philosophy of Helvetius, and Owen took it from Bentham and based upon it English communism. Etienne Corbet, banished to England, brought those ideas back to France and became here the most commonplace representative of communism. But also the more advanced of French communists, such as Dezamy, Gay, etc., developed, like Robert Owen, the materialist doctrine into real humanism and the logical basis of communism.