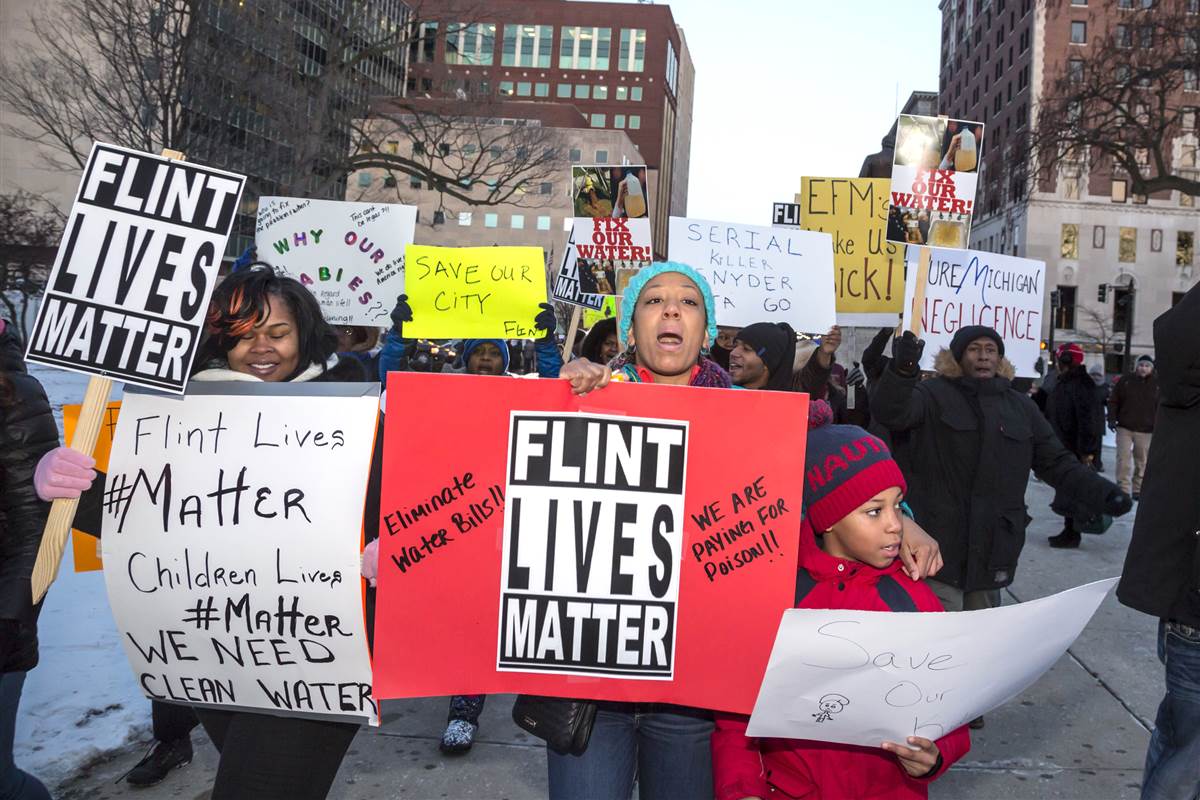 Over 25 years after Michael Moore’s film Roger and Me depicted the devastation of Flint after the collapse of the local auto industry, the city has become the poster child for something that “isn’t supposed to happen here.” As the severity of the lead contamination of the city’s water supply became known, it “went viral” as a subject of outrage on social media, and in the future will be remembered as one of the many provocations that finally broke the tolerance of the masses.

The genesis of the calamity can be traced to an ordinary occurrence in recent years: a routine austerity measure. In April 2014, a state-appointed “emergency manager”—a technocrat given unilateral power over budgetary matters—switched Flint’s water supply from Lake Huron to the Flint River. The official reason was an ostensible $19 million in savings over eight years, However, it later emerged that the Detroit Water and Sewage Department, which managed the old Lake Huron contract, counteroffered a cheaper deal that would return even greater savings. An alternative theory offers one explanation for the discrepancy: Snyder intended to cut the DWSD off from a major customer base to weaken it for future attacks. Soon afterwards the DWSD was to come under major austerity efforts. In any event, the purported savings of $19 million is now dwarfed by a $1.5 billion bill for repairs.

Was it stupidity or duplicity that lit a fuse that exploded in an epidemic of developmental disorders in young children and a full-blown crisis for Michigan and its infrastructure? The innocence of ignorance cannot be claimed—it has now been revealed that Michigan Governor Snyder and his inner circle were aware of the public health dangers as early as October 2014 and told no one. But given the series of events that befell his scheme, we can hardly credit him with intelligence either.

This episode provides a graphic illustration of the nature of austerity. Capitalist politicians announce a new round of “cost-saving” measures. The frugality and viability of the measures may be dubious, but one thing is sure: cuts are made to essential services workers rely on while capital scavenges for fast money in assets newly on the market at fire-sale prices. In the end, far from restoring equilibrium, such cuts prepare the basis for deeper crises in the future.

Marxists understand the problem, not as a matter of the malevolence or myopia of the individuals and parties involved, that can be reformed by changes in policy, but as a necessity for the continuation of an undead, a vampirish economic order in the gravest of crises. The central question posed by the capitalist crisis is—who is going to pay for it? The capitalists, clearly culpable but incapable of accountability or shame, answer: “Not I!” And as long as they hold the power to impose that answer, workers will live their futures under this grim new normalcy.

The setting of the crisis in the heavily African-American majority city of Flint recalls the segregation of water fountains and bathrooms under Jim Crow. Additionally, there is the atrocity of thousands of undocumented immigrants denied emergency bottled water for lack of legal identification. As the crisis drags on, it’s increasingly clear for all to see that racism and oppression are hard-wired into the capitalist system instead of a surface feature supposedly liposuctioned out of society by 1960s civil rights legislation.

And if the most oppressed workers are the first to pay for the crisis, the rest of their class soon follows. A recent Washington Post headline reads, “Untold cities across America have higher rates of lead poisoning than Flint.” This is the future capitalism has in store for those who have no option to but to accept the norms of an increasingly diseased society—all while water bottling companies continue production in California uninterrupted by a catastrophic statewide drought.

It is a morbid irony of history that the Flint River toxins were produced by the very industry that dominated what is now known as the “Rust Belt.” Some of the greatest battles between American labor and capital took place here, including the great 1936–37 General Motors sit-down strike in Flint, which gave rise to the modern American industrial labor movement. But just a few decades after these great victories, a new batch of labor leadership and their “partnership” with the bosses yielded new results: this industry was whisked away to the South, the “prison-industrial complex”, and the many other corners of the planet where cheaper labor rates can be exploited for capitalist gain. And the grandchildren of retired autoworkers were left defenseless to the pollutants and politicians that were left behind.

Still, the story is not over. As Governor Snyder covered up the contamination, the working mothers of the poisoned children launched a protest campaign that would bring the emergency to national headlines. Outraged as we are by the moral eyesore of this latest capitalist crime, we should be equally optimistic in the capacity of the victims of these evils to put an end to the system that spawns them, and to create a new society where all the necessities—and luxuries—of life would be in abundance for all. Indignities such as the Flint water crisis, the murder of Sandra Bland, the draconian anti-transgender bill almost passed in South Dakota, and more are providing a quick education to young people as to what this system is, yet no revolutionary mass movement that could answer these provocations has appeared. But this is not yet the final word. In social tension, like in economic crisis, forest fires, and sandpile avalanches, the longer an equal and opposite reaction is postponed, the greater is the inflammable and unstable material that piles up, and an explosion is prepared that may be as conclusive as it is inexorable.