For a Massive Anti-War Mobilization 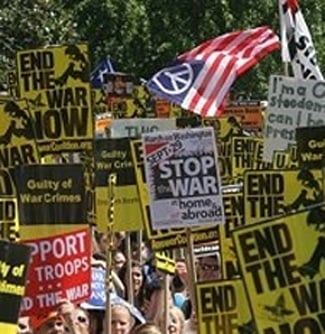 A majority of Americans now oppose the Iraq war and occupation, and growing numbers want the troops in Iraq brought home now. However, as the war drags into its sixth year, those in power in Washington present no perspective for an immediate or even timely end. Instead, they speak of “time horizons” for withdrawal while both corporate parties continue to debate “how best” to secure their grip on the Middle East in the interests of U.S. imperialism.

McCain insists the U.S. must stay in Iraq and continue the current mess.  Obama says that yes, some troops should be withdrawn from Iraq, but then he adds that they should be sent to Afghanistan instead! Both candidates are in favor of intensifying the U.S. war in Afghanistan and leave open the option of expanding intervention in Pakistan and / or bombing Iran. For workers and youth, any of these options are unacceptable!

The anti-war movement must have no confidence in the Democratic Party. It is not an anti-war party. Rather, it has been the best vehicle for the ruling class to continue the war. The Republicans have already suffered politically due to the war, losing many seats in Congress, and now potentially the Oval Office. However, the Democrats have cynically have used anti-war sentiment to gain more seats, despite their overwhelming support for the war. And in their two years in control of Congress, they have continued to vote for every war-spending bill proposed by Bush.

In an election year, most leaders of the labor movement and many on the “left” want to focus our attention on the ballot box instead of mass, united action on the streets. These ladies and gentlemen want to offer the bosses and their politicians an easy ride, while millions of U.S. workers suffer from across-the-board cuts and the growing economic crisis. The anti-war movement must be independent from the two bosses’ parties and remain mobilized.

As for the elections, let the candidates we in the anti-war and labor movements support be decidedly anti-war, pro-labor candidates like Cynthia McKinney (running for President as the “Power to the People” campaign) and Cindy Sheehan (running as an Independent against Speaker of the House, Democrat Nancy Pelosi in San Francisco).

The anti-war movement is most effective in action. Although there was no national mass action on the 5th anniversary of the war in 2008, there will be numerous local and regional actions this year, some of which sprung from the National Assembly anti-war conference held in June (www.natassembly.org).  There will be protests at the RNC, DNC, on October 11th, and a week of actions called after the elections from December 9th to the 14th. The rank and file of the movement should use these actions as a “spring board” to build for massive, united bi-coastal mobilizations in the spring of 2009.

Whoever wins the election, they must not be given a free ride. The labor movement must be at the forefront of the struggle against the war, no matter which the party the war leaders are affiliated with. If the labor movement really wanted to, it could end the war within a few days. The ILWU’s May Day action should serve as a starting point for mass labor actions against the war. If you agree with these perspectives please get in contact with us and join the WIL.