Hydraulic fracturing, commonly known as “fracking,” is a process used to extract natural gas. This process involves pumping mixtures of water, sand and noxious chemicals into the ground to create cracks in the various layers of rock that stand between pockets of gas and the surface of the Earth’s crust. This allows the gas to escape and collect into pools, where it can then be extracted and sold on the market. The vast Marcellus Shale Field, which spreads from upstate New York to parts of Tennessee, and covers most of West Virginia and Pennsylvania, is one of the most important sources of natural gas and one of the main geographic areas where fracking takes place.

Fracking technology as it exists today uses many different chemicals in order to make cracking the shale quick and profitable. The fracking solution contains many things that nobody wants in their drinking water, including acids and chemicals that we can find in swimming pool cleaner, disinfectants, laundry detergent, sterilizers, makeup, laxatives, caulk, soap, glass cleaner, and antifreeze. These chemicals often bleed into our water supply as they are pumped into the ground. 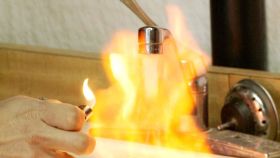 Additionally, natural gas itself often seeps into water tables as it is released from the earth during this process. As natural gas is very flammable, many homes in rural Pennsylvania have reported flammable tap and well water, a phenomenon famously chronicled in Josh Fox’s documentary Gasland, which has aired on HBO.

What is even more frightening is that these corporations have recently begun drilling in the Delaware Valley River Basin which provides Philadelphia, New York City, and other areas that lie between and around these cities with much of their water. This means that one of the most densely populated areas in the world is threatened with unsafe drinking water. What this amounts to is that drilling companies are endangering access to one of the most basic human needs, water, for millions of people, all in the name of profit.

Fumes from fracking wells also regularly get into the atmosphere, causing rates of breathing conditions like asthma among the population around them to spike.

The energy companies have shown no regard for the communities where they drill. Drill sites are regularly positioned near densely populated areas, schools, playgrounds, and hospitals.  One energy company even had plans to drill in a public cemetery in the heart of the city of Pittsburgh until community protests forced the city’s government to issue a moratorium on drilling within the city limits.

Drilling companies must obtain leases in order to drill on private land, and early in the gas boom (which coincided with the breaking of the housing bubble and the start of the capitalist economic crisis), they found many willing working-class people desperate to supplement their incomes in any way possible. The companies lied to these people, telling them that the process was safe, and then proceeded to permanently despoil their land, destroying the value of their property as well as that of their neighbors, and further worsening their economic situations.

Additionally, explosions and other accidents at fracking wells are a common occurrence. Gas workers enjoy few safety standards, and dozens have been killed and injured on the job. Very few of these workers are unionized, making it difficult for them to fight for better protections. There are many documented cases of workers purposefully sabotaging drilling equipment in frustration at this state of affairs. Gas workers and grassroots anti-fracking movements should team up in the struggle against corporate frackers, as they are natural allies!

While oil and natural gas companies have been trumpeting the Marcellus Shale Field as the next Texas and investors are piling in, the reality is very different.  A New York Times article, “Insiders Sound an Alarm Amid a Natural Gas Rush,” on June 25, drew from the release of thousands of pages of energy company documents and internal emails to illustrate a picture of “inherently unprofitable gas wells” that, despite the toxic fracking, would be unable to extract a significant amount of natural gas over the long term.

The present natural gas boom in states bordering the Marcellus Field can quickly turn into a bust, with workers paying the bill through the loss of jobs and long-term environmental damage. This explains why the energy companies are resorting to a process as destructive as hydro-fracking, as it keeps operational costs low to offset an inherently risky investment.

Energy companies’ inability to safely and efficiently tap the large natural gas reserves beneath the Marcellus Field also poses big problems for U.S. capitalism, which is dependant on rapidly-disappearing fossil fuels. Natural gas is used to heat most buildings in the U.S. and Canada, and is also used for generating electricity. “Peak gas” is the point at which the amount of useable gas reserves falls behind the rate it is consumed. As long ago as 2005, Exxon CEO Lee Raymond told Reuters that “gas production has peaked in North America.” The article went on to say that, “While the number of U.S. rigs drilling for natural gas has climbed about 20 percent over the last year and prices are at record highs, producers have been struggling to raise output.”

Shamefully, Republican Pennsylvania Governor Tom Corbett has promised not to tax profits of the Marcellus Shale corporations or regulate their activities. While it is safe to assume that Corbett does not plan to hold these corporations accountable for the horrific pollution that they are creating, the Democrats are really no better. In fact, Corbett’s Democratic Party challenger in the 2010 gubernatorial elections, Dan Onorato, only differed with Corbett on the question of whether or not to modestly tax corporations operating on the Marcellus Shale Field. Onorato and Corbett stand together in favor of for-profit fracking without holding the fracking companies accountable for the destruction this resource extraction method can cause.

The outrage against fracking has sparked grassroots protest movements, coordinated by the group Marcellus Protest (www.marcellusprotest.org). We applaud this movement’s determination and tenacity in the fight to protect the physical health of our class and preserve the environment for future generations of workers to enjoy. However, without representation in the halls of power, movements such as this are fighting with one hand tied behind their backs. What is needed is a party of those people whose health is being destroyed by this nightmare.

The only organizations that have the resources and the manpower to fight against the corporate interests behind this travesty are the unions. To its credit, the labor movement has been involved in various campaigns that attempt to address this issue, but so far they have mostly only demanded that the profits extracted from the exploitation of gas workers and the destruction of the environment be taxed. The Workers International League thinks that this is not enough, and that as both bosses’ parties stand united behind the devastation of for-profit fracking, the labor movement needs to throw its considerable weight into the creation of a mass labor party that will champion the working class, which stands to suffer the most from the depredations of the energy extraction industry.

The WIL also supports a moratorium on fracking until it can be done in a truly worker-friendly and environmentally safe way. No to polluting our air and water in the name of profits!

However, we should point out that on the basis of private ownership of the means of production, true “corporate responsibility” is an impossiblity, since private industry will always cut corners in the unending quest for profits. Unless and until the entire energy sector  of the country is integrated in a comprehensive and rational plan of production, distribution, and exchange, which aims to improve everyone’s quality of life, instead of maximizing profits, we will continue to see poisoned water and unnecessarily injured workers. This is why we are in favor of nationalizing the key levers of the energy sector under workers’ democratic control. Because in the final analysis, we cannot plan what we do not control, and we cannot control what we do not own.

The sad fact is that the corporations responsible for fracking aren’t even paying taxes in Pennsylvania, one of the states most affected by this issue. We believe that workers’ tax dollars should not go toward cleaning up the mess caused by the fracking companies, since it wasn’t the working class who made the mess in the first place. We contend that the drilling companies should have to pay 100% of the medical costs of everyone who has been harmed by their pollution, as well as 100% of the cost of cleaning up the damage they have done to the environment.

If they cannot pay or are unwilling to pay for this, then those companies should be the first ones nationalized and put under workers’ control, with compensation only to those in genuine need. Not a penny for the CEOs and big capitalist investors whose greed is polluting our water! Under public ownership and under the democratic control of workers, the unions, and the broader public, we could then decide whether or not to continue using fracking technology.

We are in favor of stricter environmental laws and of fully funding agencies such as the Environmental Protection Agency (EPA), in order to enforce those laws. However, we must emphasize that this can only solve a part of the problem. The United States government is dominated by big business, and this includes the tops of each and every government agency, including the EPA. Only the direct and democratic participation of the working class in the running of the government and the economy—from workers in the gas fields to the communities affected by fracking and beyond—can ensure an effective check against more deadly accidents and environmental damage.

Ultimately, within the framework of capitalism there is little that can realistically be done to make fracking safe. The capitalist system is driven by profits. When traditional drilling methods can’t yield a high enough rate of profit, “big energy” resorts to using toxic methods to force natural gas out of the ground faster, in order to keep the cash flowing into the pockets of the owners and big investors.

Capitalism is an unplanned and irrational system that has not seriously explored and implemented non–fossil fuel energy alternatives, because there is so much profit to be made by selling an increasingly scarce resource. As socialists, we are not against industry, technology, or the use of the earth’s resources. However, the point is to make humankind’s harvesting of natural resources rational and sustainable.

As “peak gas” approaches, fracking will likely continue to increase as easily accessible natural gas fields are bled dry, endangering the environment more and more. Within less than 200 years, fossil fuels which took hundreds of millions of years to form have been irresponsibly squandered by unchecked exploitation of the Earth’s resources in the name of profits. This yet again underlines the need to put an end to the rotten system of capitalism once and for all. Only on the basis of socialism, where the productive forces could be harnessed consciously and democratically by the human race, in harmony with the environment, will it be possible to clean up the mess made by capitalism.