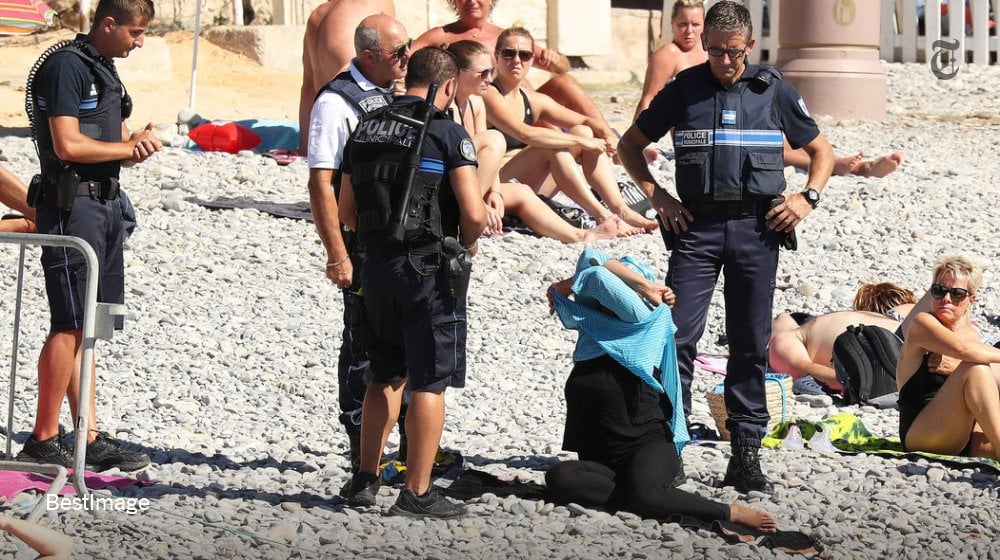 Fifteen holiday resorts in France, predominantly in the southeast of the country, have recently attempted to ban full-body swimsuits, known as burkinis, provoking uproar in response. In particular, images this week of armed French police forcing a woman to remove headscarves and long-sleeved clothing on a beach in Nice have been met with shock and disgust. In the past week, three women in city of Cannes were all fined €38 ($43) for their dress.

The backlash against these racist and draconian actions has already resulted, today, in France’s highest court declaring the burkini ban to be illegal: “a serious and clearly illegal blow to fundamental liberties such as the freedom of movement, freedom of conscience and personal liberty,” according to three senior judges. Despite attempts by local resorts to ban the burkini as a “necessary, appropriate, and proportionate” to “prevent public disorder,” the high court decision sets an important precedent. This comes on the back of much campaigning and many protests across the world, including legal challenges in France by civil rights groups such as the Human Rights League (LDH) and Collective Against Islamophobia in France (CCIF).

Cutting across the class struggle

The burkini ban has been brought forward by right-wing politicians under the guise of “protecting secularism” and so-called “French culture.” Nice’s deputy mayor, Christian Estrosi, recently wrote that, “hiding the face or wearing a full-body costume to go to the beach is not in keeping with our ideal of social relations” and the French Prime Minister, Manuel Valls, stated that such dress was “not compatible with the values of France.”

In the past, similar rhetoric about “protecting women’s rights” and “liberal values” has been used by the imperialists to justify wars in predominantly Muslim countries, such as Afghanistan, where women do face very real oppression. Hillary Clinton, the current favorite in the race for the White House, is guilty of crying such crocodile tears, which are frequently used by the ruling class to demonize the so-called “enemy” and soften up public opinion for all manner of reactionary laws and imperialist wars by the capitalist state.

The burkini ban, however, has nothing to do with protecting secularism or French values, but is a cynical ploy for politicians to ride high on the current fear of Islamic terrorism, following a string of high profile attacks in France over the past year or two, and particularly in recent months. By deriding Muslim women for the way they dress, the French establishment is creating and increasing an atmosphere of fear within the working class as a whole, as a means to divide people of differing faiths and ethnicity. In doing so, they hope to cut across the rising class struggle in France and distract from the current highly unpopular government’s policy of austerity, such as the recently introduced reactionary labor law, which has provoked mass protests and strikes across the country over the past year.

This tactic of division has in part been successful. A witness to Siam’s forced undressing (the woman who was made to remove a blue headscarf earlier this week), said, “The saddest thing was that people were shouting ‘go home,’ some were applauding the police.” Also, in Corsica, where a similar ban was implemented, 200 people were stopped by police from marching into a housing estate with a high population of people of North African origin, shouting “this is our home.”

There has been a long period of polarization in French society—and internationally—which has been brought about by the current crisis of capitalism. There will be further and more intensive scapegoating of minorities by the ruling class in the future to deflect from the real causes of strife, unemployment, and terrorism: austerity and war—the policies of capitalism and imperialism.

The fight against Islamophobia, against racial oppression, and against women’s oppression is ultimately tied, therefore, to the fight against capitalism and imperialism. The right to choose how you dress is a basic democratic demand—the state cannot be allowed to dictate what people may or may not wear. It is the aim of Marxists to free all people from the oppression of the capitalist state and to create a truly democratic society. The capitalist state does not act in the interests of working people, but whips up and preys on fears and prejudices to divide workers and keep them apart, emphasizing their differences in an attempt to protect the privileges and wealth of the 1%.

We stand against the bans on the burkini, and for the right for people of any gender or religion to choose what they wear. This is not an endorsement of the burqa. It is abhorrent for four armed police to demand that a woman remove her clothing. The state has absolutely no right to tell anyone how to dress or what to do with their bodies. To demand that a woman removes items of clothing is no less oppressive than demanding that she cover up. It is the choice to wear whatever you want that signifies the destruction of oppression—the forced stripping of women of clothing does nothing to liberate women (Muslim or otherwise) and ensure that they have a genuine choice. This can only be achieved in a society free from institutional sexism, racism, and Islamophobia.