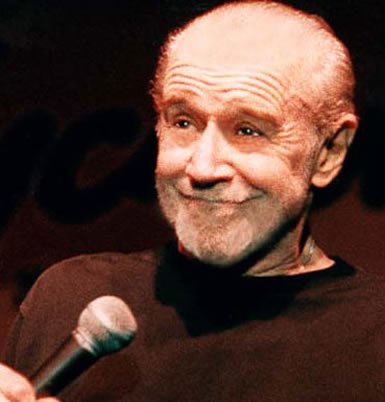 George Carlin, the American comedian, died of heart failure on June 22 at the age of 71. His fans will remember him for many things, from his “Seven Dirty Words” act, to narrating children’s television programs. His routines often dealt with a wide sweep of social, political and cultural topics, from abortion rights to fast food and fad cultures. He started off fairly straight-laced in the 1960s  before his more well-known rebellious and critical style in the ‘70s until his death, calling out what he often termed “bullsh*t”. His class conscious fans will remember him for the unapologetic loathing he expressed toward the U.S. ruling class, continually pointing out their hypocrisy and arrogance. Here are a few particularly sharp excerpts:

“Boy these conservatives are really something aren’t they they’re all in favor of the unborn, they will do anything for the unborn, but once you’re born you’re on your own! Pro-life conservatives are obsessed with the fetus from conception to nine months after that they don’t want to know about you, they don’t want to hear from you, no nothing: no neo-natal care, no day care, no Head Start, no school lunch, no food stamps, no welfare, no nothing! If your pre-born you’re fine – if you’re pre-school you’re f**ked!”

“…There is a reason education sucks! And it’s the same reason it will never, ever, ever be fixed…Because the owners of this country don’t want that! I’m talking about the real owners now. The real owners, the big wealthy business interests that control things and make all the important decisions. Forget the politicians. Politicians are put there to give you the idea that you have freedom of choice – you don’t! You have no choice! You have owners, they own you, they own everything, they own all the important land, they own and control the corporations, they’ve long since bought and paid for the Senate, the Congress, the state houses, the City Halls, they’ve got the judges in their back pockets and they own the big media companies so they can control just about all the news and information you get to hear. They got you by the balls!

“They spend billions of dollars every year lobbying; lobbying to get what they want. Well we know what they want; they want more for themselves and less for everybody else! But I’ll tell you what they don’t want: they don’t want a population of citizens capable of critical thinking … they’re not interested in that, that doesn’t help them, that’s against their interests…

“You know what they want, they want: Obedient workers! … People who are just smart enough  to run the machines and do the paper work, and just dumb enough to passively accept all these increasingly sh*ttier jobs. Jobs with lower pay, longer hours, the reduced benefits, the end of overtime, and the vanishing pension that disappears the minute you go to collect it. Now they’re coming for your Social Security money! They want your f**king retirement money! They want it back so they can give it to their criminal friends on Wall Street … The owners of this country know the truth. It’s called ‘The American Dream,’ because you have to be asleep to believe it!”