GMs Betrayal of Oshawa Workers: The Law Means Nothing When Profits Are at Stake 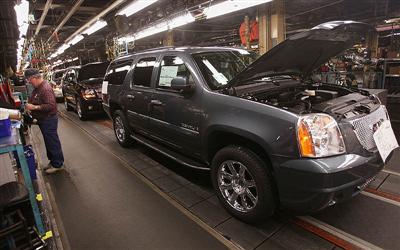 The past few weeks at GM Oshawa have shown that workers cannot trust the bosses to provide well-paying jobs. At the same time, we have seen that workers are prepared to fight to protect their jobs. The only things lacking are a leadership that has the same militancy as the rank-and-file, and the ideas to take this militancy forward.

Canada’s manufacturing workers continue to get battered. GM recently announced that they are shutting down the truck plant in Oshawa, Ontario, eliminating 2,600 well-paying unionized jobs. The closure is not because the plant has become obsolete or inefficient; the truth is precisely the opposite. GM’s announcement came only days after the plant had once again been named the most efficient and producing the best-quality cars in all of North America. The reason the plant was shut down was because GM could get larger profits by moving the plant elsewhere where wages are lower.

What stung most for workers was that GM was closing the plant almost immediately after having promised not to do so. Again, only 2-weeks had passed since General Motors and the leadership of the Canadian Auto Workers (CAW) signed a new contract in which GM promised no more layoffs and no more plant closures until 2011. In exchange, CAW workers agreed to a wage freeze and other concessions. As has been the trend in the recent period, the leadership of the CAW felt compelled to accept more concessions and cuts in the hopes that the auto bosses would stop the plant closures and job losses that have decimated Canada’s manufacturing sector.

By now, it should come as little surprise that the bosses are willing to lie, cheat and steal in order to increase their profits. It does not matter to them if this is off the backs of working class families and communities. Even though we are all taught to respect the letter of the law, it means nothing to the bosses. It doesn’t matter what a contract says, since the bosses can ignore it as they see fit. No court in the land will defend the worker.

The mood of Canadian workers, particularly in central Canada, has been changing over the past couple of years. As we have been saying for some time now, workers have begun to question the rules set forward by capitalism, going so far as to occupy their workplaces when threatened by plant closures or when the bosses refuse to pay severance.

The reaction by CAW workers was very similar. By the next day, CAW workers had organized a very effective blockade of GM Canada’s national headquarters in Oshawa. Although not a strike, the blockade meant that GM’s executives were unable to carry on with their daily business as unionized maintenance, custodial and janitorial staff would not cross. The blockade attracted a great deal of attention towards GM’s betrayal and garnered support from the people of Oshawa, including Oshawa’s mayor.

The blockade sharpened many workers’ opinions and showed how far many were willing to go to defend their jobs. During a visit by Fightback supporters [Socialist Appeal’s sister publication in Canada], one worker said, “We’re right. We’re going to stay as long as it takes for them to realize that.” Another said, “We’ve put so much effort into supporting these companies. We are constantly telling people to buy Canadian, and I still am. But no matter how much effort we put into supporting these guys, they have no loyalty to the country they’re in or to the people that work for them. They pour hundreds of millions of tax-payer money into these corporations and then they turn around and move the whole sha-bang to China or Mexico or some other country where they shoot you for being in a union. I figure we’ve paid for it, now we ought to own it.”

Unfortunately for CAW workers, their leadership lacks the courage and militancy of the rank and file, as witnessed by their passivity in obeying a court injunction that ordered the workers to dismantle their blockade of GM headquarters. The only thing that kept the pressure on the company was the blockade and without it GM is free to act with impunity. The leadership presented the ruling as a “moral victory,” because the judge had admitted that GM’s actions were “untrustworthy.” But, moral victories are not going to put food on the table or a roof over one’s head. A few days after this “moral victory,” GM rubbed salt in the wound by announcing a temporary layoff of 1,000 employees until after Christmas, proving that the company now feels it can get away with anything.

The Thursday prior, over 5,000 workers from across southern Ontario (and representing dozens of unions) had gone to Oshawa to support the autoworkers. This is a sign of the strength and solidarity that workers have, as well as the growing realization that the current system is completely incapable of solving the problems that workers are facing. It doesn’t matter how much workers concede to the bosses, it is never enough. Over at Air Canada, another 2,000 jobs have just been eliminated despite two decades of concessions by Air Canada workers. Even a supposedly legally binding contract isn’t enough to protect one’s job these days.

Unfortunately, the only ones respecting bourgeois laws are the leaders of the labor movement. What is needed now is for workers to go on the offensive and actively fight back. The blockade in Oshawa attracted thousands and had the widespread support of the entire community. Workers from across the area (and the country) were watching, witnessing the incredible show of solidarity among a very broad section of the working class. Almost all workers, by now, realize that no jobs are safe at the moment and any one of them could be heading to the unemployment line. To save jobs we need to show just as much respect for the law as GM’s management.

The workers’ organizations must adopt new tactics, or more accurately, the militant tactics of the 1930s, the tactics that allowed us to successfully organize our unions in the first place. No unions would exist today if workers were not prepared to break the law in the past, and if the current trend continues, there will be no unionized jobs left in manufacturing. It has been shown that out of the hundreds of thousands of manufacturing jobs lost, unionized workers are twice as likely to be laid off. Only militant methods such as mass demonstrations, strikes, blockades and occupations can save these jobs. With the support of the community and the wider labor movement, workers can overturn the courts in action.

No amount of concessions or government handouts to corporations are going to defend well-paying jobs. Both General Motors and Air Canada have received plenty of both and this didn’t stop them from collectively axing nearly 5,000 jobs in the last few weeks. Not even protectionist measures (as advanced by Buzz Hargrove and the CAW leadership) will help, as the big corporations are hoping to maximize profits by moving to areas where they can pay workers less. The law courts and the other mechanisms of the state are only willing to enforce the law when it benefits the capitalists. The law means nothing when profits are at stake. In other words, the entire system is rotten to its core and completely incapable of providing a solution for workers.

The Oshawa GM struggle marks another step forward in the growing movement to save manufacturing jobs. Unfortunately, with the actions of the leadership, it appears that this struggle is stepping back for now. However, with the increasing number of closed factories, it seems inevitable that sooner or later a group of workers will learn from this and other struggles and decide to keep their occupation going, no matter what the courts throw at them. At a certain point, the prospect of defying the law is less frightening than the prospect of not being able to feed your family. Once this happens, and a group of workers show the way, we are sure that the fight at GM Oshawa will be re-ignited. The conditions are being prepared for a generalization of the movement in the coming months and years.

As some workers in Oshawa are realizing, the fight now needs to be about nationalization and workers’ control, where production isn’t based on profit and exploitation but on providing decent well-paying jobs for workers. This is the only way that manufacturing (and other) jobs will be protected and kept for workers. If the millions upon millions of dollars given to the bosses had been used to buy stock, the workers would probably already own these companies. The union leadership needs to use this as a rallying cry because workers have shown that they are willing to fight to the finish to defend their jobs. The New Democratic Party [Canada’s Labor Party] must also adopt this call. The leadership cannot resort to legal tricks and manoeuvres, or claim victory when it’s clearly not the case. This only demeans and demoralizes workers. The only way that workers were ever able to achieve victories was through militant struggle. Many workers are beginning to realize that capitalism cannot provide a solution and that the only way forward is to fight for socialism.