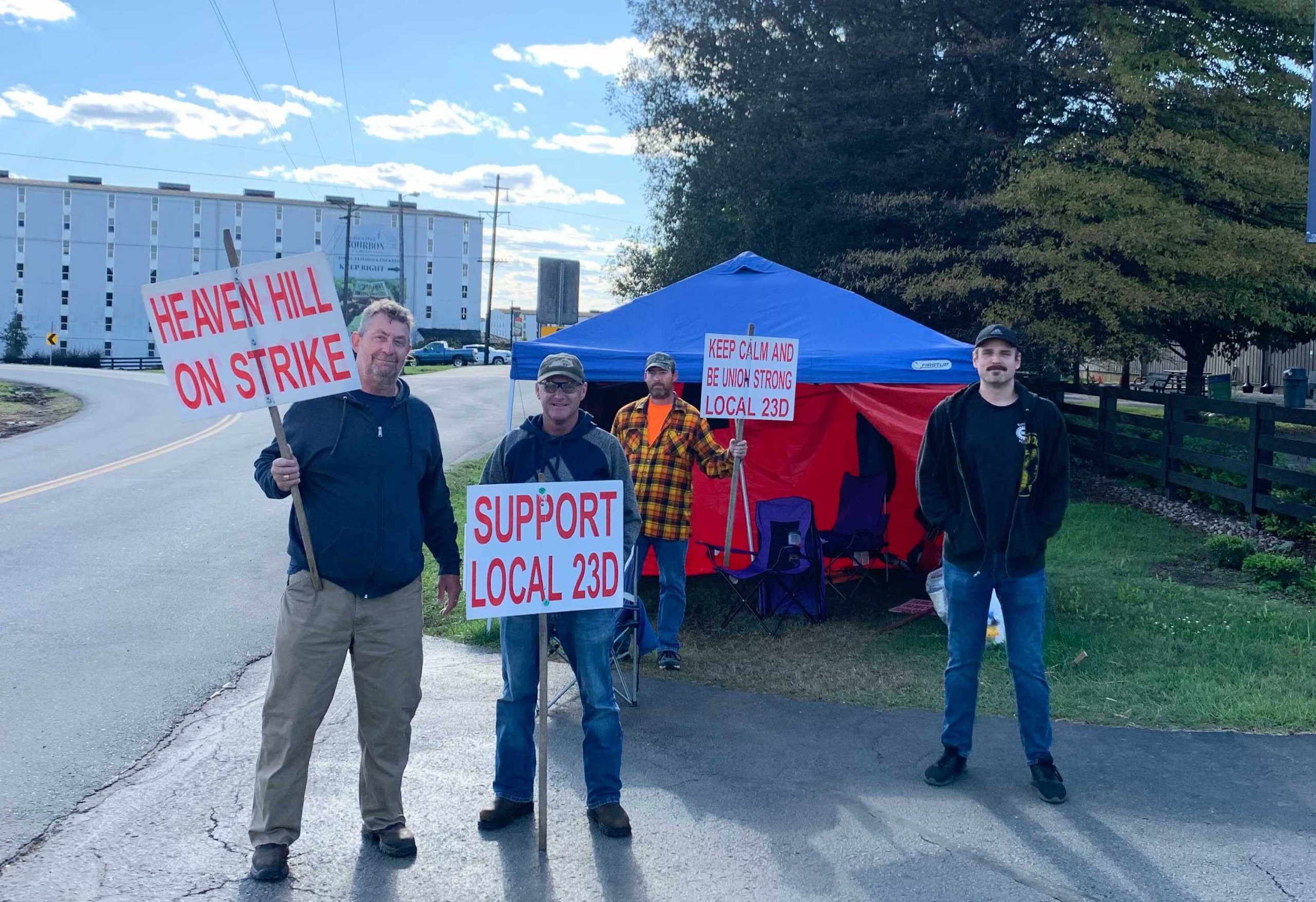 After an exhausting six-week strike by the Heaven Hill Distillery workers in Bardstown, KY, a tentative agreement was ratified between United Food and Commercial Workers Union (UFCW) Local 23D and management. The organic militancy displayed by the rank and file on the picket line mirrors the struggles of other food, beverage, and service workers who were lauded as “essential” and “heroes” at the beginning of the pandemic—only to be worked to the bone in dangerous conditions for the obscene profits of the capitalists.

The stage for the Heaven Hill Strike was set six months ago when the bourbon bosses proposed a new five-year contract that reduced overtime, made significant scheduling changes, and eliminated the cap on health insurance premium increases. The greedy obstinacy of the company to concede anything to their 420 employees required a federal mediator at one point, and by late August, management threw a tantrum and walked away from the negotiating table. The distillery workers resoundingly rejected the proposal left on the table, with an overwhelming 96% vote to reject the proposed contract.

It seemed a strange time for Heaven Hill to tighten its workers’ belts, given the company’s $500 million in annual revenues and the $19 million Distillery Visitors Center opened in June. The Kentucky bourbon industry has made record profits for nearly a decade during the so-called “Bourbon Boom.” Next to horses, bourbon is the biggest of big business in Kentucky. It brings in $8.6 billion annually, generates 25,000 jobs, and provides over $235 million in yearly tax revenues for the state. Indeed, there is even the “Bourbon Trail”—a tourist destination for the enthusiast.

The Bluegrass State is the center of global bourbon production, distilling 95% of the world’s output of this spirit. There are a few natural reasons for this distinction. Kentucky resides on vast deposits of blue limestone that naturally filters our water, making it some of the best in the world. We also have all four seasons, and the temperatures range wildly, from ice-cold winters to brutally hot summers. This climate interacts uniquely with the charred oak barrels that contain the whiskey, giving it the aroma, flavor, and color aficionados expect. Finally, our fertile soil is perfect for growing corn, the other integral ingredient in Kentucky bourbon’s mash bill.

The entire state relies upon this business, especially the city of Bardstown, the “world capital of bourbon.” This small historic town has had distilleries since 1776 and hosts the Kentucky Bourbon Festival, which brings in 50,000 thirsty tourists from all over the world. After scrapping the Festival last year due to COVID-19, the city hosted it on September 16–19—one week after the Heaven Hill workers began their strike.

Labor struggles in Kentucky’s distillery industry are not new. Despite the exponential profits of the owners, they constantly encroach on the few benefits enjoyed by their workers. As recently as 2016, employees of Jim Beam, the world’s leading bourbon whiskey producer, went on strike for the first time in that company’s history. After a week-long picket, UFCW Local 111D staved off the attempts by management to overwork and extract absurd amounts of surplus value from the workers.

Working-class solidarity with the Heaven Hill strikers has been strong, even if financially costly. Many businesses and bars throughout Kentucky have refused to sell Heaven Hill products, including some in Bardstown itself. Of course, the bourbon barons struck back as Heaven Hill’s attorneys spuriously alleged harassment by the strikers, as well as sabotage of trucks. Of course, there wasn’t any proof, just the need to demonize working-class folks fighting for a fair shake. And of course, they turned to the bourgeois judiciary, with Circuit Court Judge Charles Simms issuing a restraining order on September 21 that severely reduced the picket area. Unfortunately, the union’s leaders respected this injunction, which was clearly aimed at preventing the picket line from achieving its ultimate goal: shutting down production altogether.

One particularly disgusting aspect of the Heaven Hill Strike is that the company has attacked its employees’ healthcare in the middle of a catastrophic pandemic. Irony rears its ugly head, as these same workers have been on the frontlines since COVID-19 first reached these shores, risking their health daily. While other businesses failed, shut down, and tourism slowed during 2020, Kentucky distillery workers, including those at Heaven Hill, manufactured 521,000 gallons of the alcohol-based hand sanitizer used by local hospitals.

One of the more comical moments during these six weeks of struggle was the comeuppance of a scab trucker who overturned his whiskey-laden vehicle after profanely gesturing at the picketers—using both hands! It became a national meme of sorts, with the trucker physically OK, but embarrassed and ashamed. Thus always to scabs!

Union members from the IMT’s Louisville Branch drove to Bardstown to show solidarity and to give any class aid needed. It was clear from our interactions that Heaven Hill’s small but militant workforce is conscious of the larger class struggle and had been building ties with the broader class. In fact, local non-union workers had donated so much food to the picketers that they actually fed our comrades! Engaged in a bitter economic struggle, many workers we discussed with showed a growing political awareness that we live under the dictatorship of capital and that only a workers’ government can solve the many problems we face. Not only did we bring revolutionary ideas to the picket line, we also learned a great deal from the Heaven Hill workers that day, and listening to them while standing on the picket line was inspirational.

In an all-too-familiar move, the company pressured Local 23D’s leadership by threatening to permanently replace all of the strikers with non-union scabs. The union leadership caved and signed a tentative agreement with the company. Although far from what the workers deserve and fought for, due to their tenacity, some gains were made. The new contract includes healthcare and a 4.25% increase in the employer’s contribution; a pay increase of up to $3.09 an hour over the life of the contract; overtime pay protection; traditional 40-hour work on Mondays through Fridays; vacation benefits; and retirement savings.

Kentucky’s proud traditions of class struggle were on full display as the members of a small, scrappy union resisted a billion-dollar company and a corrupt state government. As the American labor movement begins to reawaken after years of hibernation, there are many lessons here for the hundreds of thousands of workers now entering into struggle. The need to combine economic with political struggle, bold tactics with clear ideas, class militancy with class consciousness, organization, and independence is increasingly evident to workers. The IMT will continue to stand shoulder to shoulder with workers on the picket lines, raising these ideas and learning from their struggles.