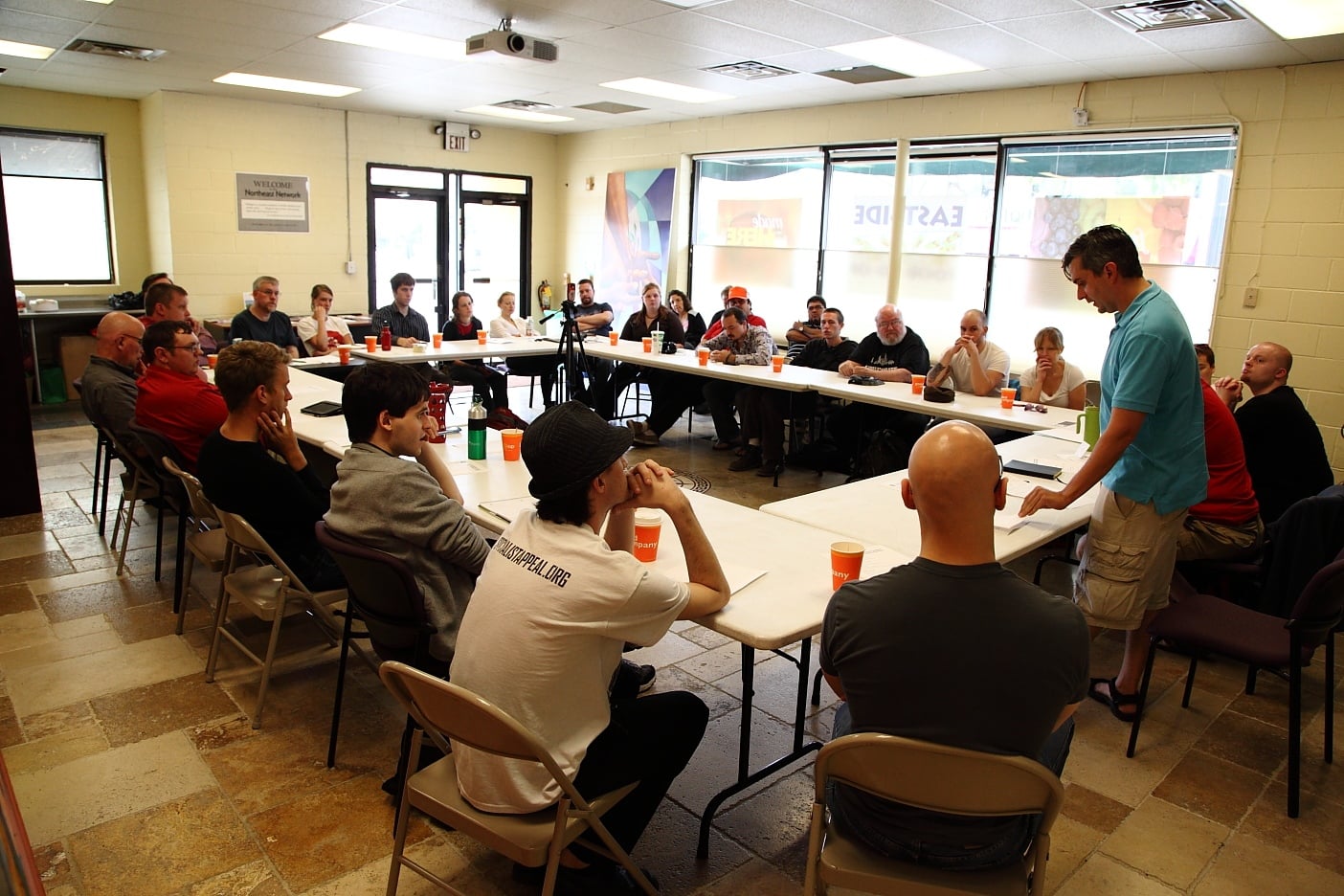 Over 30 comrades and contacts, mostly from Minneapolis-St. Paul, St. Louis, and Madison, but also from Portland, Dallas, NY, NJ, Boston, Italy/North Carolina, met in Minneapolis on the weekend of June 29 and 30 for the first-ever Midwest Regional School. The presence of so many comrades from other regions, including a comrade from the Italian section of the IMT, Falce Martello, was a huge boost and made the weekend that much more electric.

The school was opened by Derrick Watson, the Minneapolis branch secretary, who read the following inspiring greetings from the Pakistani section of the IMT:

Dear Comrades of the U.S. Section,

We, the Central Secretariat and the comrades of the Pakistan section send revolutionary greetings to the U.S. section for organizing the Midwest Regional School. The work of the WIL is a source of great inspiration for us and every step forward is applauded by the comrades here. The ruling classes of Pakistan and USA have a coalition of deceit and deception. The relationship of the comrades in Pakistan and USA of the IMT is based on truth and a profound understanding of the ideas of Marxism. Our unity is in irreconcilable struggle and sacrifice, which are necessary to achieve the victory of the greatest cause in life—the emancipation of the human race. We are  proud of this comradeship and it is a source of strength and commitment for us. We are convinced that this regional school will be an important step forward in building our U.S. section, which will be the only force that can carry out a socialist revolution in the U.S., with revolutionary impacts across the planet.

The first day’s discussions centered on the ideas of Ted Grant, based in large part on Alan Woods’ new biography, with an overview lead off by WIL National Secretary John Peterson. With the backdrop of the world crisis of capitalism and the mass movements erupting from Turkey to Brazil, Egypt to Greece, the need for Marxist theory and clarity has never been greater, and there is much to learn from Ted’ life and work. 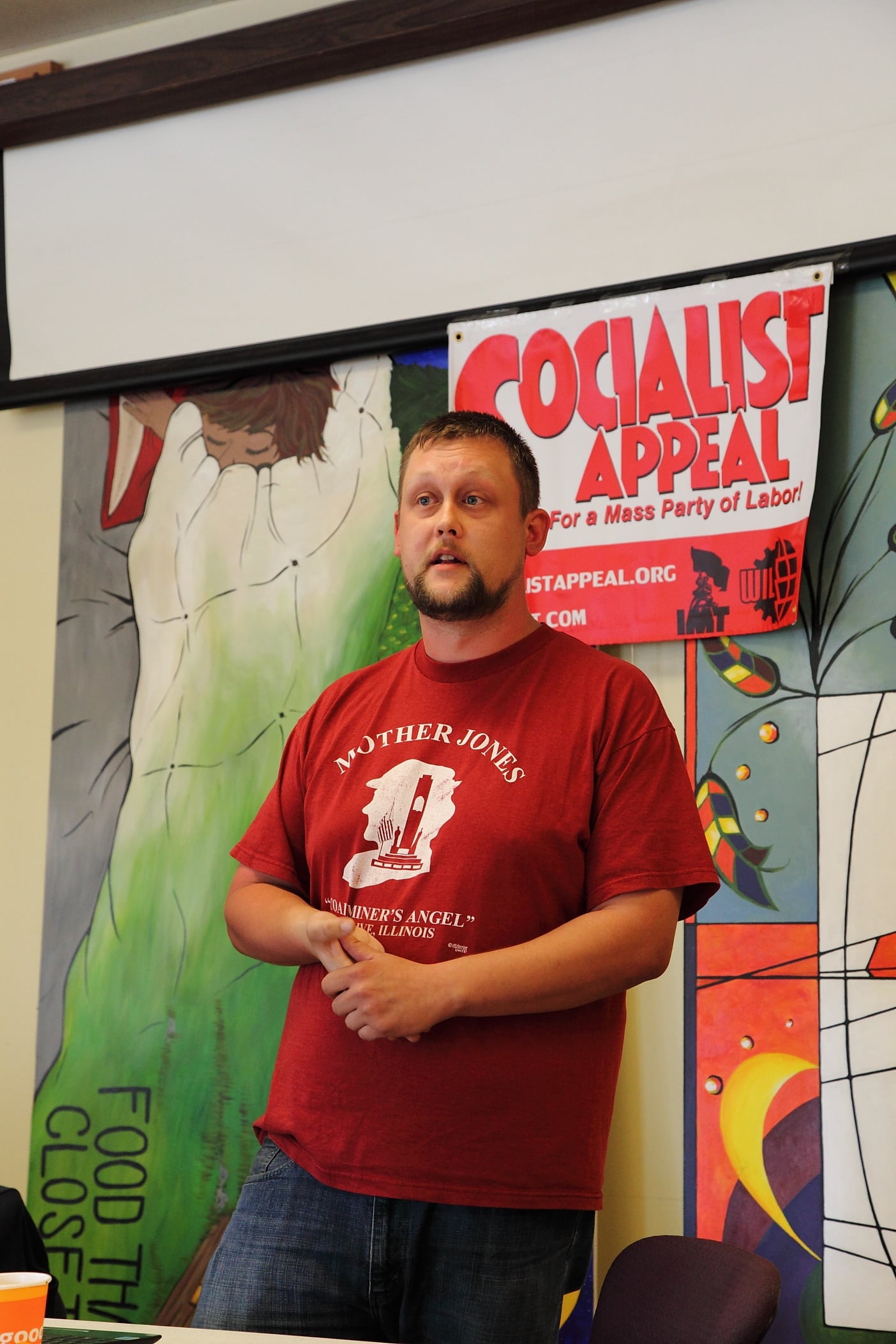 We then had two focused discussions on the questions of Proletarian Bonapartism and the Work of the Marxists in the Mass Organizations, led off respectively by Josh Lucker and David May, both from St. Louis. All three discussions on Ted’s ideas were dynamic and engaging, and comrades’ political level was clearly expanded as a result.

If we were to succinctly describe Ted, comrades agreed that tenacity, enthusiasm, optimism, and persistence would be a good start. Add to that his substantive theoretical contributions, confidence in the working class, and his strategic / tactical flexibility and perspectives, and it is clear why revolutionary Marxists need to learn more about Ted and read his works.

We then broke into smaller groups and discussed the nuts and bolts of selling the paper. A list of ten commonly asked questions was drawn up by Dana Cooper, who introduced the discussion, and the small groups practiced answering the questions. We then reconvened and comrades shared their groups’ best answers. Some were simple and to the point, others humorous but politically sharp, and all were insightful, and the exercise really helped comrades break the ice and build everyone’s confidence for selling the paper in the months ahead.

That evening, comrades gathered for a barbecue / Fighting Fund party and enjoyed grilled burgers, hot dogs, salads, cookies, and a beverage or two (or three!). A guitar eventually made its appearance, and several comrades and contacts took turns playing, including one contact (who has now agreed to join!) who is a twice-Grammy Award nominated folk/blues musician. From blues and jazz to revolutionary songs, it was a great end to a fun evening.

Day two began with a discussion on the lessons of Bolshevism, led off by Tom Trottier from New York, which was also followed by a lively and wide-ranging discussion, on everything from the dramatic ups and downs experienced by the Bolsheviks, the dynamic nature of democratic centralism, the need for political and theoretical clarity combined with extreme tactical flexibility, the dialectical relationship between the class, the party, and the leadership, the national question and Rosa Luxemburg’s ideas generally, the parallels with today’s situation and the stage of the development the WIL is passing through, and the Bolsheviks’ unstoppable determination to overcome any and all obstacles.

After all these excellent theoretical, historical, and political discussions, we discussed another crucial part of our work: contact work, recruitment, and consolidation, introduced by Mark Rahman from New Jersey. Many experiences and stories of success and failure were shared by the comrades in the robust discussion that followed. Winning people to the ideas is only the first step: we must then consolidate them and educate them in our ideas, program, perspectives, methods, and traditions! 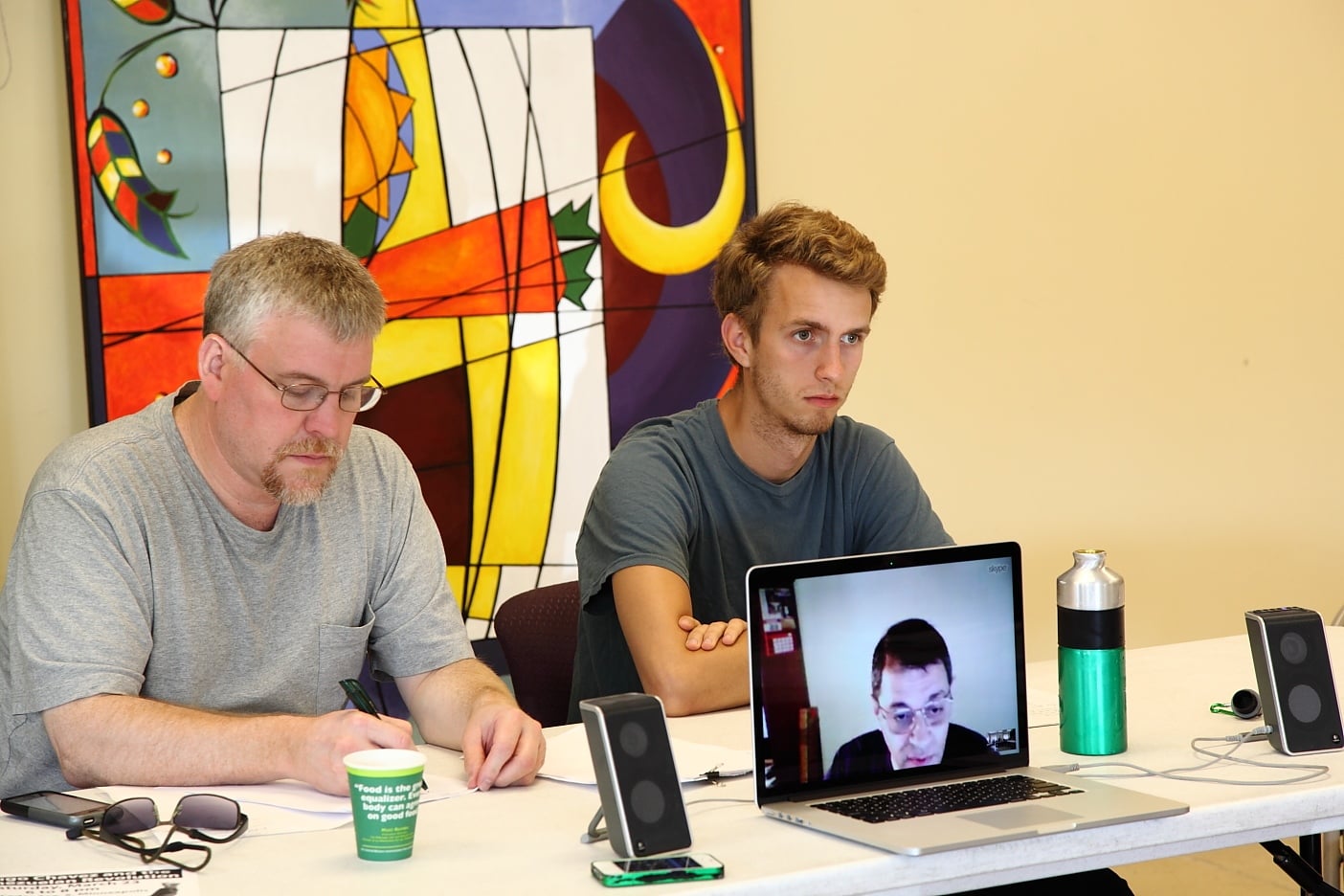 We then heard an international report on the work of the IMT from comrade Fred Weston, live from London via Skype. With only 30 minutes, it was impossible to relate everything, but the comrade managed to fit in quite a lot, including a short overview of world perspectives. From the work of our comrades in Canada and Mexico, to the exciting developments in Pakistan, Italy, Britain, and throughout the Middle East and North Africa, it is clear that the political authority of the IMT has never been higher, and the possibilities have never been as far-ranging. Excellent questions were asked, including what methods have proved most useful around the world in developing the student and campus work, which Fred answered clearly and constructively.

Which brought to our final session: the finance appeal, which was introduced by comrade Kevin Nance and carried out by Tom Trottier.

A total of $3,710.00 was pledged, $3,100 of it from comrades in the Midwest region. In addition, we raised a total of $400 in beverage sales during the social / fundraisers in the evenings. The branches in the region plan on putting on more Fighting Fund parties between now and the end of the year to reach the full $5,000 Fighting Fund target set for the Midwest for 2013.

Comrades made big sacrifices to raise this money, and we will also be reaching out to comrades who were unable to attend, and also to sympathizers to raise even more. With even just a few more donations we can reach or even surpass our targets. If the success of this collection is any indication, we can be confident that all the regions will reach their targets by the end of the year. If you would like to make a contribution toward our work, click here.

In another reflection of the enthusiasm for the ideas, branches and individual comrades also bought $365 in political materials, much of it to take back for tabling in their own areas.

Throughout the weekend, various comrades took turns chairing the sessions, which was valuable experience and helped keep the sessions on time, and everyone also worked collectively to set up and tear down for the meetings. Videos of some of the sessions were recorded and we will work on making them available ASAP.

The participation of the comrades in the discussions was fantastic. Time was filled to capacity—and sometimes we would have benefited from having even more time—and everyone had a chance to speak, ask questions, make suggestions, share experiences, etc. The overall political level of the discussions was very impressive and shows a qualitative growth in the organization, even since our last big gathering in Pittsburgh at our National Congress last November.

The school ended with rousing renditions of The Internationale and Bandiera Rossa—although many comrades are still learning all the words! 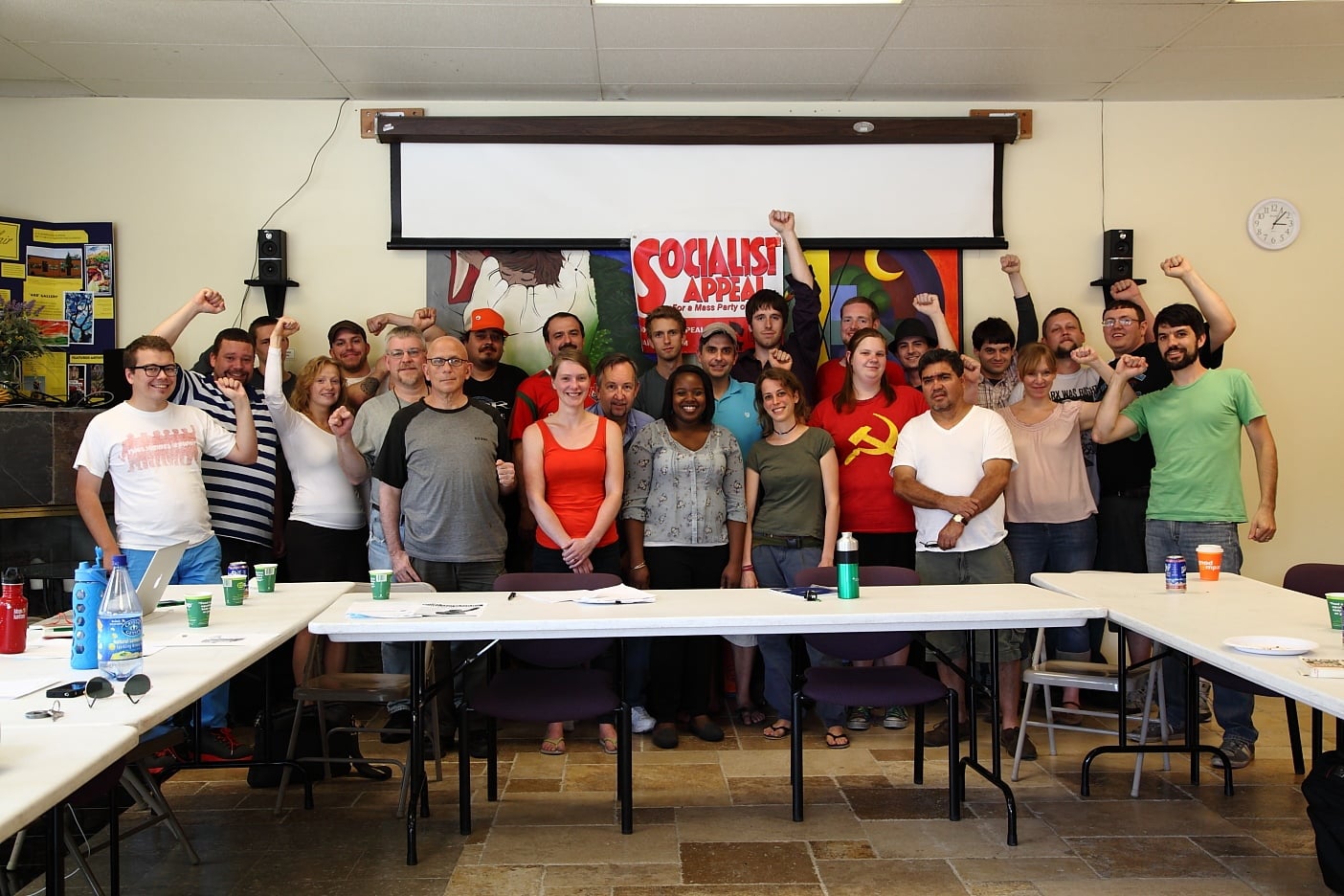 Due to careful advance planning by the MWRS organizing committee, the budget set and the money raised in attendance fees almost exactly matched the expenses. The food was plentiful and delicious (much of it homemade!), and the meetings started and ended punctually and there was coffee and breakfast in the mornings. The Minneapolis comrades are to be congratulated on organizing the accommodation, food, meeting space, and transportation so smoothly. By having the logistics organized well in advance, comrades could focus their energies on the main reason they had come: the politics. It was a true collective effort!

If some summarizing comments can be made about the entire weekend, it is that the comrades were filled with enthusiasm for the ideas of Marxism, confidence in the power of the working class and the energy of the youth, excitement for the prospects of the WIL and the IMT, pride in what we have collectively achieved so far, and an all-around feeling of camaraderie. We are sure this will be an inspiring model for the other regional meetings we have planned in the months ahead.

Onward to the Northeast and California Regional Schools!
Onward to building the WIL and the IMT!
For more information on joining and building the Workers International League click here.