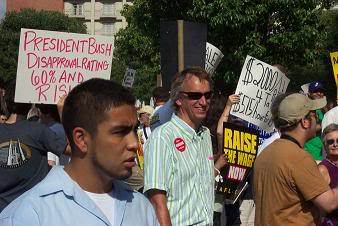 On Wednesday, July 28th, hundreds of protesters gathered outside the Ritz-Carlton luxury hotel in St. Louis while Bush and top Republican Party members dined inside at a $2000 per plate fundraising banquet. Those gathered protested the presence of President George W. Bush, the Iraq War and against the failure of the US Congress to raise the minimum wage. The demonstration was called by the labor-community organization Jobs with Justice, and included contingents from the SEIU union, the Workers International League, Young Communist League and the Democratic Party. Democratic Party officials also made use of the occasion to highlight their own pro-war candidates, with a meeting of State Auditor Claire McCaskill with the Missouri Military Relief Fund later in the evening.

The main slogans and banners present at the demonstration were "Raise the Wage!" and "Only The Working Class Can Defeat Bush," which was carried in leaflets distributed by and also on a large banner held by the Workers International League contingent.

Traffic around the city was completely snarled for most of the day Wednesday, with one main highway and dozens of main roads closed off for the Presidential motorcade. To make matters worse, these closures were not announced ahead of time so thousands of motorists on the way home from work were trapped in traffic for hours before the President finished eating and left the city.

The banquet, the contents of which remain undisclosed, raised campaign money for Senator Jim Talent, a Republican representing Missouri's eastern district. Wednesday's banquet marked the fifth time that Senator Talent's events have been highlighted either by George W. Bush, Laura Bush or Vice-President Dick Cheney. Talent's Senatorial campaign has so far raised more than twice the amount of money raised by his Democratic opponent. In an article that appeared in the St. Louis Post-Dispatch on the day of the Presidential visit, Talent spokesman Rich Chrismer said that "whenever the President comes in for Sen. Talent, it helps bring attention to his accomplishments." One of Senator's biggest accomplishments from the banquet attendees perspective has been his adamant opposition to raising the minimum wage for American workers, which has remained at $5.15 for more than a decade. While the Senator's own pay as a member of Congress has increased by $31,600 since 1997, the minimum wage has not risen by a single cent.