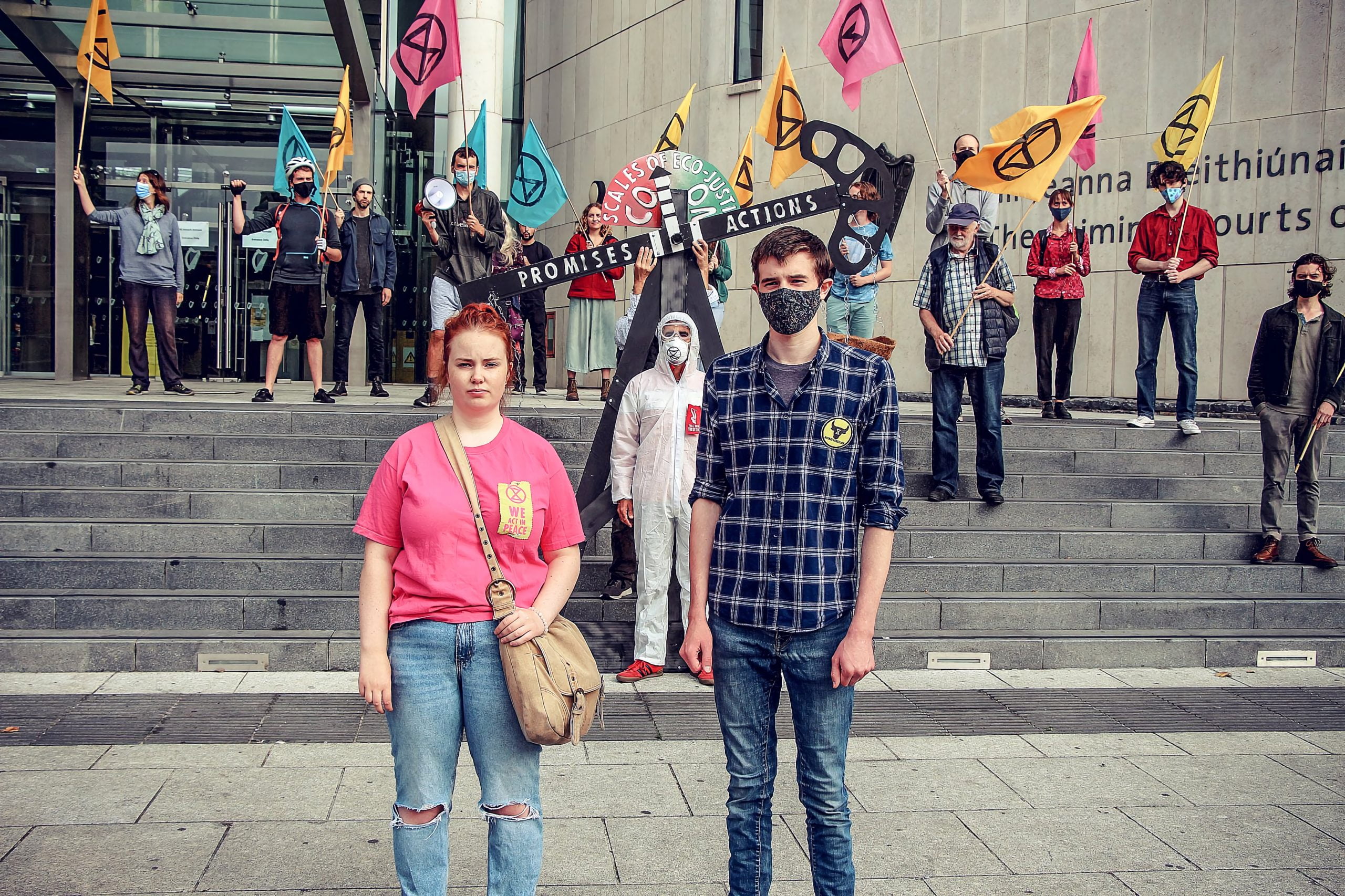 On Wednesday February 9, climate activists Orla Murphy and Zac Lumley will appear at the District Court in Dublin to face serious criminal damage charges, for which they could face up to a year in prison. The “crime” they are accused of committing? Peacefully protesting against the inaction of the Irish government in the face of climate change by painting the words “No More Empty Promises” on the front of a government building. In the case of Zac Lumley, a supporter of the Irish Marxists (IMT Ireland), he is accused of merely live streaming the protest.

The Irish state has decided to push ahead with this case because it clearly wishes to make an example of these two activists. It has already treated these comrades scandalously since arresting them after their protest on March 19, 2021. They were forced to pay a €3,000 bail following their imprisonment. Zac spent three nights in prison, as he was unable to immediately come up with this sum of money. Meanwhile, Orla—who was 19 years old at the time—was imprisoned for five weeks after refusing her bail conditions. The same bail conditions ban them from much of Dublin city center, while Orla has been banned from entering Dublin whatsoever!

These charges are absolutely scandalous. The two are accused of willfully destroying government property. They did no such thing—their protest merely resulted in paint being sprayed and thrown on a building wall. It was subsequently washed off. No property was destroyed. In the case of Zac, the prosecutors intend to have him punished for merely recording this protest, by which logic any journalist could also be charged in the future.

Contrast these accusations of “destruction” with the wanton destruction of our planet’s climate and ecosystems by the capitalist class in its pursuit of profit, against which these comrades were protesting. What is the Irish government doing to prevent this? Nothing. It is aiding and abetting the crime of climate destruction, willingly serving the corporations in their pursuit of massive profits.

This pro-capitalist government, in which the “Green” Party shamefully participates, offers nothing but saccharine promises followed by inaction. In the words Orla painted on the side of the Department of Foreign Affairs building, we say, “no more empty promises!” The comrades were motivated to protest, like millions of young people worldwide, because of the destruction of the climate by a tiny number of capitalists. They had every right to do so.

The state, alarmed at the groundswell of anger that is building among millions of workers and young people across Ireland, is attempting to resort to repression. This trial is intended to have a chilling effect on activists of all causes. It intends to send a warning to workers and young people that it will no longer tolerate peaceful protest in Ireland against the polluting, pro-capitalist, anti-human, and anti-nature policies of the government.

We therefore call upon socialists, trade unionists and climate activists in Ireland and across the world to protest against this trial, and to extend their solidarity to Orla and Zac.

Protest in Dublin outside the Criminal Courts of Justice in Dublin on February 9 at 9am.

We call on supporters to send delegations to register their protest at Irish embassies and consulates around the world on the day, and send letters of protest to the Director of Public Prosecutions and the Minister for Justice.

We say: Drop the charges! Protest is not a crime!

We are writing to you to express our alarm that the state has decided to prosecute two young environmental activists, Orla Murphy and Zac Lumley.

It is a scandal that at a time when the world is careening towards a climate catastrophe that the state in Ireland is subjecting young climate activists to serious criminal charges that could carry sentences of one year in prison. The superficial and insignificant amount of damage caused by the protest that led to Orla and Zac’s prosecution pales into utter insignificance next to the destruction being wrought to the Earth’s climate.

These charges are an attack on the democratic right to peacefully protest and we demand that they be dropped immediately.

Ireland is among the worst polluters in Europe, and the eyes of environmental activists, trade unionists and young people around the world are on the Irish government.

[Insert your name, organization (if applicable) and country]