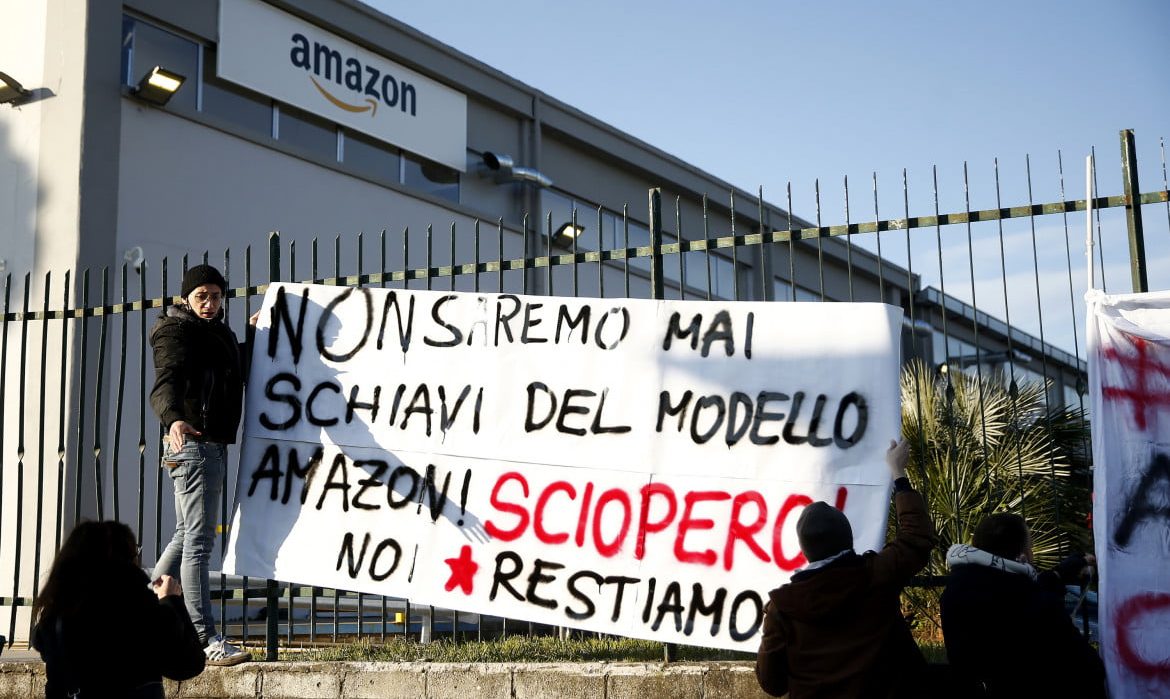 Like other multinational corporations, Amazon is a giant octopus with tentacles all over the world. Everywhere they have facilities, the workers are subjected to bad working conditions and low wages. However, workers around the world are fighting back against their bosses and Amazon is not exempt from this.

IMT comrades in Italy send us this exciting report (translated from the original in Italian) of a one-day nationwide strike on March 22, 2021 at Amazon facilities in Italy. These workers also sent greetings and a message of solidarity to the brothers and sisters trying to establish a union in Bessemer, Alabama. The Amazon union drive in Alabama has become a point of reference for workers worldwide, and Socialist Revolution will publish more articles on this struggle in the coming days and weeks. Watch this space!

The first national strike of Amazon workers in Italy took place on Monday, March 22, after Amazon’s management walked away from the negotiating table. Although it is difficult to measure the exact level of participation, the strike was a resounding success.

The Seattle-based megacorporation, notorious for its union-busting policies, imposed temporary, day-long layoffs on many trade union representatives and activists who are not counted among the strikers in the official figures, but who nevertheless played an active part in its success.

Beyond the overall numbers, the strike was significant for other reasons. While there have been isolated strikes at some Amazon warehouses, this is the first time trade unions and workers at a national level have fought back against the arrogance and authoritarianism of this multinational, which has made obscene profits in recent years. This was also the first experience of strike action by the majority of Amazon’s (mostly young) Italian workforce.

We know this action had an impact, because there were many testimonies from Amazon customers who did not receive the products they had bought on the day of the strike, or who knew in advance that the goods would arrive at their destination the following day.

There was a high level of sympathy and solidarity at the announcement of the mobilization from people who buy Amazon products every day. And there were many displays of individual and collective solidarity by fellow workers in advance of the strike.

The shop stewards and workers of UPS, for example, invited Amazon workers to their meetings before the 22nd and threatened their company with a solidarity strike with the Amazon workers if UPS handled additional packages on the day of the strike. On March 22, UPS did not handle a single parcel beyond their standard complement.

Many shop stewards from other sectors sent solidarity resolutions to the Amazon workers in support of their struggle. Metalworkers, retail workers, healthcare workers, and many customers and young people also went to the warehouse gates during the action.

The strike attracted a lot of attention on the news and on social media, because many people identified with what this struggle represents: a fight against the injustice and inequality under which we live on a daily basis in this system, which the pandemic has amplified.

On the one hand, Amazon CEO Jeff Bezos is sitting on a mountain of money. His assets increased between March and October 2020 from $113bn to $192bn. On the other hand, fathers and mothers of working families are killing themselves with overtime to bring home miserable wages.

As noted, this is not the first Amazon strike. In several locations, including Castel Sangiovanni (near Piacenza), Vigonza (near Padua), Prato, Pisa, Torrazza (near Turin), just to mention the most recent cases, there had already been local strikes and initiatives of struggle, in particular over the last 12–18 months.

However, this national strike in a company with about 9,500 employees, including many newly hired (with about 2,600 additional workers coming on in 2020), and a large number of temporary workers, gave a sense of strength and unity never felt before by the workforce. 40,000 more workers (contractors and subcontractors) are also involved in Amazon’s business. If organized in a long-term battle, such forces could defeat even a multinational of this size and power.

On almost all the sites, picket lines were organized from dawn to prevent vans from going out to distribute the parcels. In most of these warehouses, at least until midday, not a single parcel went out. There were long queues of blocked vans.

The mood everywhere was very positive and militant. The workers were extremely open to discussion and more eager than ever to talk about their experiences and denounce their working conditions.

Small groups of workers would frequently join in discussions, and there was keen interest in understanding the analysis and proposals detailed in the leaflet in support of the strike, thousands of copies of which were circulated by “Days of March”, the alternative left tendency in the CGIL trade union confederation, launched and organized by the Italian Marxists.

There was a lot of anger about the exhausting pace of work, inhuman shifts, impossible hours, crazy algorithms, and the strong pressure to meet unrealistic schedules that force drivers to disregard their safety and rules of the road.

Workers related many stories of exploitation and abuse, with drivers being forced to make up to 200 deliveries in a nine-hour shift every day. Sunday work itself is a cause of great unease, as are inadequate wage levels.

Many of the drivers from contractor companies, the vast majority of whom are on casual contracts, were happy to see the strike and had no problem with being “forced” to queue outside of the gates.

The main point of discussion on the picket lines was that this struggle is not of Amazon workers alone. It concerns everyone, because all the multinational logistics companies would like to lower their workers’ conditions to the level of those at Amazon.

For this reason, there are certain expectations for a strike that the trade unions have called across the whole sector for the end of March.

There was also an enthusiastic response to the riders’ strike planned for March 26, with the aim of achieving a national contract for all riders.

At Amazon’s Italian headquarters in Castel San Giovanni, the CGIL shop stewards sent a message of solidarity to their colleagues in Alabama who are waging a battle for unionization. It read as follows:

“We workers and delegates of the MXP5 site in Castel San Giovanni, on strike today, like all our colleagues in the other warehouses and delivery companies in Italy, stand by and support the struggle of the Amazon workers in Alabama.”

The workers also wrote “From Piacenza to Alabama—One Big Union” on the gates of Amazon.

This was indeed a great day of struggle. However, an important weak point was highlighted: the trade union leadership.

It was too detached from the workers in the days leading up to Amazon’s decision to break off all negotiations and too hesitant in the period between this decision on March 12 and the strike.

Above all, the official position was too narrowly focused on asking Amazon to return to the negotiating table, when it is quite clear that the only message Amazon will listen to is the prospect of a serious struggle impacting on their profits.

If the struggle hurts them, they will consider concessions. If not, they will unleash even harsher anti-trade union repression.

On March 22, Amazon certainly suffered damage in terms of volume of deliveries, but it’s still limited. What is needed, therefore, is a plan: an escalation strategy that can put the corporation and its management in troubled waters, without allowing them to dump the consequences on the workers day after day.

This strategy must be discussed by the workers in their trade unions, which must make their structures, organization and shop stewards committees from other companies ready to continue and support the struggle.