From the minute comrades began to set up the stage, a week before the event was due to open, it was clear that the times were ripe for the return of our national Red Festival (Festa Rossa) for the 4th year. As soon as the first comrades set foot in the XXII Aprile park, in the city of Modena, mounting tents, stages, kitchens and various stands, dozens of people from the neighborhood came to us expressing their delight that the communist gathering had returned to the area.

“The comrades have come back to hold another festival here? Finally! It has been a while since we last saw this happening!” Comments like these met us from the first day of the building work until the last things had been packed up.

In fact, the last time a similar initiative had been held in that area was in 2007. Lots of preparation work has been done, such as leafleting, postering (and a little coverage in the local newspapers), making the event quite well known in town. Two young comrades from the nearby town of Crema reported that upon arriving at the train station in Modena they asked directions from a lady who, when she heard that they were heading to the Festa Rossa, decided to escort them there by car. This is just one example of the support received from the locals.

We felt at home in Modena, and the following four days confirmed this. The event started in the afternoon of Thursday, July 3 with the national gathering of the student association “Sempre in Lotta” (Always in Struggle).

The Festa Rossa provided home made food for hundreds of people every evening (including wood-oven baked pizza) in a restraint, but it also had a wine bar and a bookshop where a wide selection of books and magazines were sold, alongside the monthly paper of the Italian section of the IMT, FalceMartello.

On Friday night, we hosted an assembly of workers and trade unionists, co-ordinated by Paolo Grassi, the editor of the Bulletin “Radio Fabbrica” (Factory Radio). Speakers included Mario Iavazzi from the CGIL (Italian Confederation of Labour) national steering committee, Vito Isgrò’, a leading comrade of the recent industrial struggle at the Piaggio Aero factory in Sestri Ponente, Genoa, Piero Ficiara, a shop steward from TERIM, a local factory at the center of a prolonged struggle against closure, and Riccardo Antonini, a train operator recently fired by RFI (the Italian Railway Network company owned mostly by the state) because of his vocal support, alongside the families of the victims, for an enquiry into the Viareggio railway disaster of 2009, where over 30 people lost their lives. Antonini’s speech was particularly notable because the anniversary of the accident falls on June 29th, and maybe most importantly, because after 5 years no one has been found responsible for this massacre. However, what is known for sure is that RFI CEO Mauro Moretti has tried to cover up evidence and wrongfoot the investigation, and that he has been helped in this by the state apparatus.

More events were held during the weekend, including the screening of documentaries on workers’ struggles in Italy, book launch presentations, and the presentation of the movement “Sinistra Classe Rivoluzione” (Left, Class, Revolution) with a speech by Alessandro Giardiello.

It is important to note that all the political discussions and interventions had a consistently large attendance through the gathering, in spite of the large numbers of comrades engaged in the necessary donkey-work of running the Festival. However, there was also space for music and dance, with three concerts livening up the nights.

The high numbers involved in the political discussions, and the joyous atmosphere of the evenings further demonstrated the perfect balance of militancy and socialising.

The last seminar on Sunday evening was addressed by Alan Woods, with more than 150 people attending. He summarised some key events in the history of the international workers movement, including the foundation of the first international 150 years ago this year, and concluded by examining the most important tasks for the Marxists and the working class today, faced as we are with the global crisis of capitalism. 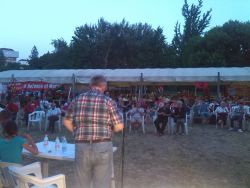 The whole experience of the Festa Rossa was excellent. The only complaint could be that it finished too quickly!

To conclude, we want to leave a message to the people we met at the Festa Rossa and the community around us: Dear Comrades, support us and not only will we be back with Festa Rossa, but we will do something more: we will build the left on a firm basis, the basis of a working class party that will give a voice to the working class and the youth of this country, and give them the instruments to fight!