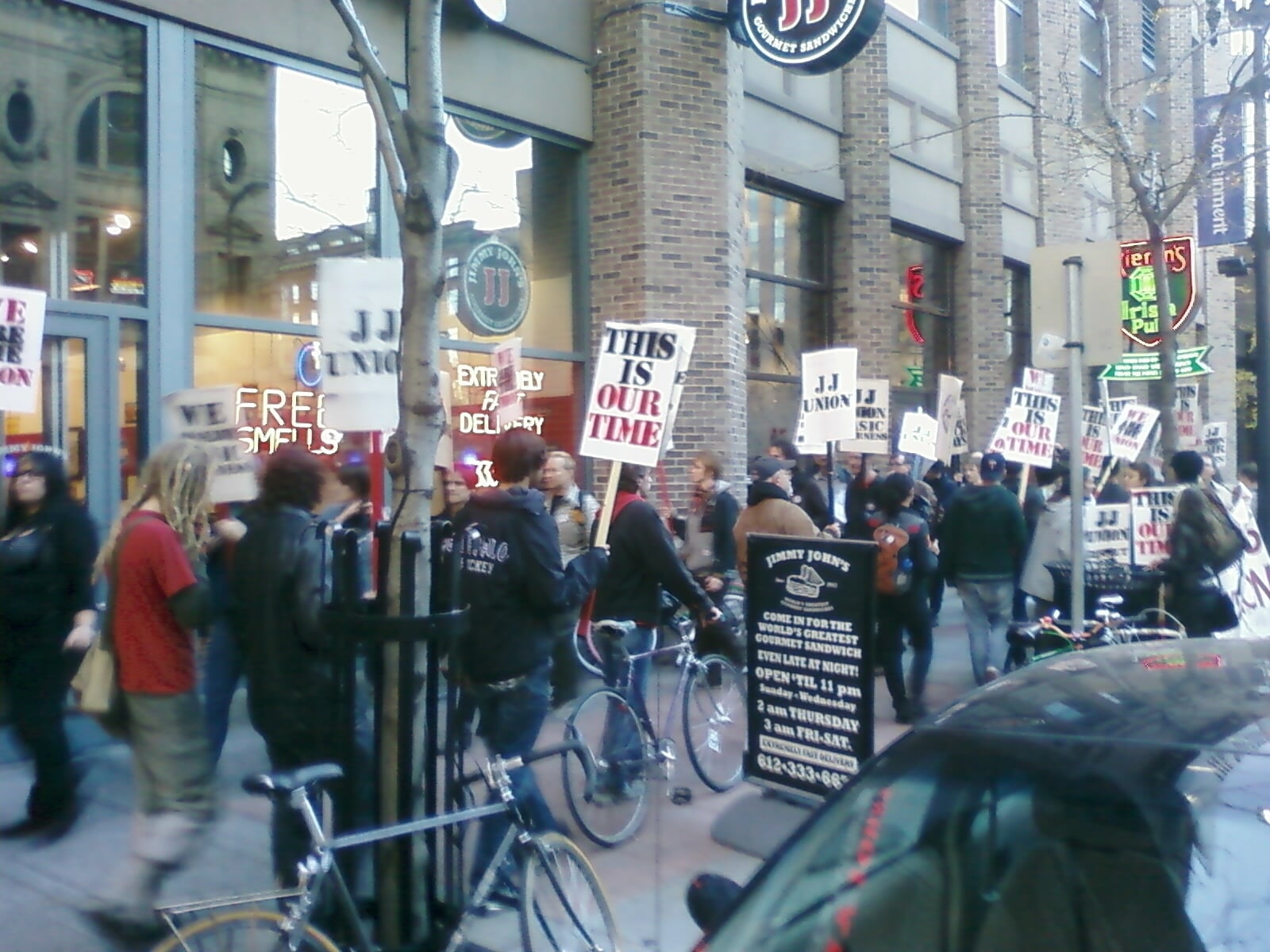 October 18th, roughly 100 Jimmy John’s workers, members of the Industrial Workers of the World (IWW), and other assorted labor activists, including WIL members and supporters of Socialist Appeal, rallied in Loring Park in Minneapolis to support the efforts of the IWW to organize 10 Jimmy John’s locations in Minneapolis.  Those present then held a spirited march, accompanied by a blaring sound system, through the Minneapolis Community and Technical College campus and then down Hennepin Avenue to the Block E Jimmy John’s location where an hour long picket line was established during the dinner rush.  The march received an overwhelmingly positive response, as passersby were met with chants of “No Justice, No Sandwiches,” “What’s Disgusting? Union Busting, What’s Outrageous? Jimmy John’s Wages,” and “What Do We Want? A Union, When Do We Want It? Now!”

The picket itself received interest from people passing on the sidewalk and the overwhelming support of the workers inside the shop, while at the same time, the indignation and disapproval of the security company responsible for the building.  Three of Minneapolis’s finest were dispatched to the scene, only to leave shortly afterwards, as it was clear that no laws were being violated.  The picket ended with a brief speech from the megaphone and a singing of “Solidarity Forever” by everyone in attendance.

The workers are demanding a pay increase to above minimum wage, consistent scheduling and minimum shift lengths (at present, some shifts are as short as one hour), regularly scheduled breaks, sick days, no-nonsense workers compensation for job-related injuries, an end to sexual harassment at work, and basic fairness on the job.  Local Jimmy John’s franchise owner Mike Mulligan and general manager Rob Mulligan, who made an estimated $2.3 million in profit from their locations last year alone, have refused to even meet with the workers, claiming that the IWW is “not a real union.” However, Jimmy John’s workers disagree.  Union cards were presented to the National Labor Relations Board (NLRB) on September 14th, and the date for the union vote is set for October 22nd.  The union has already charged Jimmy John’s with over 20 unfair labor practices claims that are currently under investigation by the NLRB.

In an important turn of events, the Minneapolis Regional Labor Federation, the local representative body of the AFL-CIO in the Twin Cities, recently voted to endorse the IWW Jimmy John’s Workers Union.  Over a century ago, this would have been unthinkable, as the American Federation of Labor of years past would have fought against any such efforts outside of their immediate purview, particularly if they were organized by the Wobblies. But the situation today is different in a number of ways.  On the one hand, the comparatively weaker numerical forces that the IWW represents today no doubt play a considerable role in assuaging any fears that those bureaucratic elements in the labor leadership may have in the immediate “threat” posed by this organization.  On the other hand, the weak situation that the labor movement in general finds itself in today is pushing many in the mainstream labor leadership left irrespective of their own intentions. In short, wherever workers are organizing into a union, the movement should come together to support them.

The syndicalist IWW gained strength at the turn of the last century on the basis of industrial unionizing, i.e. organizing all workers in an industry into the same union.  This was in opposition to the “craft unionism” favored by Samuel Gompers and most of the other leaders of the AF of L unions, who instead favored organizing workers into different, often competing, “skilled” unions, according to individual “craft.”  However, when the mass of the working class began organizing itself along industrial lines in the 1930s into the Congress of Industrial Organizations (CIO), this, along with the Wobblies’ anarcho-syndicalist political abstentionism, sealed the fate of the IWW, which effectively went into terminal decline.

However, in recent years, the IWW has made a resurgence, once again organizing a layer of workers largely ignored by the broader labor movement, this time the fast food and other food service workers.  Their efforts at organizing Starbucks workers have garnered much attention amongst the activist left.  However, as of yet, no Starbucks union has been officially recognized by the National Labor Relations Board.  If successful in winning the Minneapolis Jimmy John’s vote at the ten stores on the 22nd, the IWW Jimmy John’s Workers Union will become the first successfully organized fast food restaurant in the United States, which is in itself a significant milestone.

This is a significant development and should be given total support by the entire labor movement, not simply through resolutions passed at the Regional Labor Federation, as important as those are. The broader labor movement should throw its forces behind this effort in full.  More than that, the effort should be extended to the rest of the services sector.  Union density stands at 7.2% in the private sector in the US, and is even lower in food services (1.8%).  Within this sector is a huge reserve of workers that are practically begging to be organized.  The obstacles are great, but the numbers and power of organized labor are greater.  Just as the leaders of several of the AF of L unions, e.g. the United Mine Workers, learned the importance of industrial organizing and took up that fight in decades past, so now, the UFCW, SEIU, and other food and service unions need to learn some lessons from the Wobblies.  If organized labor were to throw its money and numbers behind a “shock-and-awe” effort to organize fast food workers across the country, they would no doubt emerge immensely strengthened.

Ultimately, with many recently employed workers being forced by the economic crisis to take non-union, low-pay (often fast food or service sector) positions, 2.5% of Americans (7.7 million) are now working in fast food. In what seems like a never-ending jobless “recovery”, organizing these layers is not a pipedream.  It is an absolute necessity.  The IWW and the Jimmy John’s Workers Union activists are confident that they will win the vote on the 22nd.  However, they will still need to negotiate a contract, and given the owners’ attitude up until now, which includes paying anti-union consultants as much as $3,000 a day to derail the union drive, the fight will still be far from over. Regardless of the outcome of this particular election, it is essential that the example be taken up and learned from by the broader labor movement in the months and years to come.