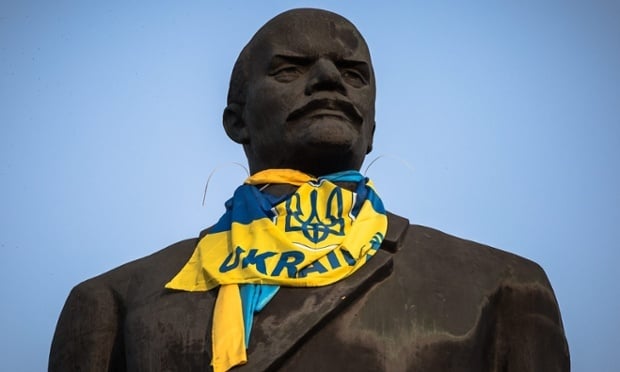 Not only a move to please the far right, the primary reason for the new law against the memory of communism (passed by parliament April 9) is another step by the oligarchy in trying to legitimize itself.

The declarations that “communism in Ukraine is dead” did not begin when the Lenin Statue was torn down by far-right protesters in Kiev’s Bessarabsky market during the first weeks of Euromaidan. These declarations have existed ever since the collapse of the USSR in the early 90s and the first banning of the Communist Party of Ukraine in 1991. The story in both the Western and Ukrainian media went, “How great it was that the people of Ukraine—so long suffering from USSR oppression—could now enjoy the freedoms offered by capitalist democracy.” Additionally, proponents of liberalization claimed that a new capitalist class would be able to revitalize the post-USSR economy, bringing modernization and efficiency.

At that time, optimism for the market econ—could be found among all layers of Ukrainian society, especially in the intelligentsia and the liberal sections of the bureaucracy. At that time, this optimism—as misguided as it was—at least could be justified, given the fact that the Soviet economy had been in stagnation for several years compared to the advanced capitalist economies.

The stagnation—and especially the bureaucracy’s misguided attempts to resolve it—was felt deep in USSR society, with rising alcoholism, violent crime and national tensions. This made the promise of “catching up to the West” in living standards a more remote possibility (although the USSR was not that far off in the global context, especially for the lower classes). The intelligentsia, in particular, saw a certain number of their counterparts in the West being graced with riches unimaginable in their “Soviet” existence.

The violent birth of the oligarchy

The ultimate result of the “reforms” and the dissolution of the USSR was an economic and social collapse not seen historically before or since. In Ukraine, the result was a 60% GDP drop, and a drop in average lifespan of 4 years from 1991 to 1999. These figures are indeed staggering, and it is not surprising that they came with loss of employment and purchasing power; severe degradation of the rural infrastructure, urban infrastructure, the health system, and education system; degradation of workers’ rights; millions forced to migrate, and others plunged into the depths of alcohol and drug abuse.

While some of the former Soviet republics were able to get some economic growth (largely beneficial to their oligarchs) by the late 90s on the back of a world economic upswing and the stabilization that this provided, Ukraine never fully recovered from its post-Soviet economic collapse.

The oligarchy formed around the more liberal-minded bureaucracy and various mafia clans that began forming during the 80s turmoil. These forces often merged with the goal of consolidating their gains. The ranks of the middle bureaucracy—tied in with the management of state industries and natural resources—were keen to turn their positions into social leverage, as they had the opportunity to take control of the entities they were managing.

The voucher privatization scheme, which was met with optimism even from some of those on the left, was a disaster. While presented as an opportunity for the Soviet people to control their own industry, the distribution of the vouchers in the context of a population with a low knowledge of market economics, and a completely ineffectual legal system, led to a situation resembling the “Wild West” in the 19th century. The vouchers were seldom honored by the managers of the industry, resulting in much of them being hoarded by various mafia schemes.

Investment from the West was seldom seen, as USSR labor laws were stricter for foreign investors than those that could be found in Asia, for example. Additionally, much of the more modern light industry—deemed uncompetitive with capitalist produced goods—was massively privatized and scrapped. This had a snowball effect across the USSR as the economy was very interdependent, with supplies being shipped across the republics.

The heavy industry and raw materials extraction industry were largely retained due to their profitability, although as downsized shadows of their former selves. The oligarchs taking over these industries would also compromise on safety standards in order to increase their margins, using the economic pressure of layoffs against the workers. The Ukrainian mining industry became one of the most dangerous in the world, with hundreds of miners dying every year in preventable accidents.

The financial sector was privatized as well, with a number of banks being founded in the 90s from the benefits of looted state assets. Among these were also predatory Ponzi schemes, promising unsuspecting people enormous return on investment for their savings, and then shutting down a short time later. The legal system did very little to address these transgressions.

How to legitimize mass theft

While neither modernizing nor growing the Ukrainian economy, the privatization of large state industry gave the oligarchs the economic power to install themselves as the new ruling class. This led to the formation of political parties based on the interests of various oligarchic clans, although some often shifted alliances. This allowed them to further control the economy through the state apparatus.

In conjunction with this, television, radio, and print media were created that represented the various interests of the oligarchic clans. Independent journalists reporting the oligarchs’ corruption were fired, threatened, and assassinated. The result was the formation of a journalistic caste obedient to whichever power was paying them. Indeed, a certain amount of media coverage was dedicated to representing the experience of the Ukrainian SSR as one long famine.

The reason for the anticommunist propaganda had little to do with sympathy for the victims of the 1930s famines and purges. On the contrary, these tragedies were cynically used to make the people forget (and the younger generation never learn) about the crimes that brought their rulers to power. Due to the lack of economic development, the vast majority of the assets still under oligarch control are industries developed during the Soviet period.

Oligarchic power in the context of the civil war

The economic crisis of 2008 affected Ukraine’s fragile economy in a particularly harsh manner. This has led to an acute economic crisis that culminated in the overthrow of President Yanukovich in early 2014 during the events surrounding Euromaidan. This led to the replacement of one oligarchic regime by an even more brutal one, which actively uses far-right elements in the country to crush any dissent, including any active left forces.

It is interesting to note that even the Donbas section of the oligarchy—who were Yanukovich’s base of support—appeared to abandon him early in the turmoil. Additionally, the anti-Maidan movement, and the anti-Kiev rebellion that sprang from it, were vehemently opposed by Akhmetov and co. Indeed, the Donbas-based oligarchs’ business empires suffered considerably from losing the region, which accounted for 40% of Ukraine’s GDP before the war.

Nevertheless, those oligarchs that came out on top of the Euromaidan crisis are making record profits, while using the civil war, privatization, and harsh austerity measures to squeeze the Ukrainian people as much as they can. These rulers are currently in the process of further consolidating their power by fueling nationalist sentiment among the masses and ruthlessly attacking any opposition. This is used to turn the masses away from the poverty and inequality that is on a level unseen since Ukrainian independence.

The fact remains however, that even a quarter of a century after the collapse of the USSR, the memory of the crimes that led the oligarchy to their positions remains vivid in the memory of people from all parts of Ukraine. It has been shown in polls that the demand for expropriation of the stolen oligarchic wealth is quite popular throughout the former USSR. It is indeed the struggle against the oligarchy—and with that a struggle against capitalism—that can serve to unite the working class of Ukraine in a struggle that transcends national lines. The organizations that can bring this struggle are still small and under government and far-right repression, but only these organizations can begin to offer solutions to the current crisis.