[Leaflet] Fight and Win Against the Starbucks Bosses Through Class Struggle!

This is a leaflet distributed by supporters of Socialist Revolution to support the struggle of unionizing Starbucks workers across the country. Download the PDF of the four-page foldable leaflet here. 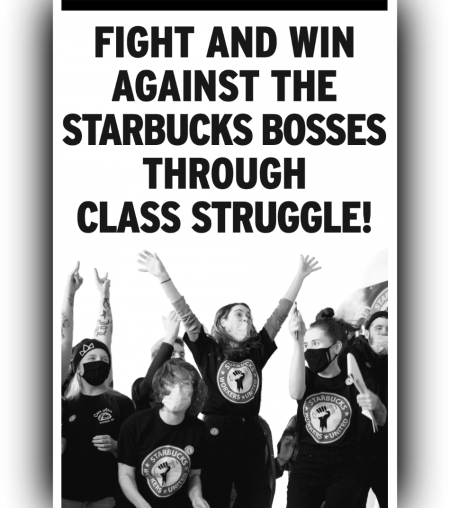 A venti-sized cup of class struggle is brewing! As of this writing, at least 64 Starbucks stores across 19 states in the US and one store in Calgary, Canada have filed for union elections with Workers United. Two stores in Buffalo have already won their elections. At the Elmwood Street Starbucks in Buffalo, an organized walkout for safety conditions forced the company to return the city’s stores to drive-through service only. These successes have inspired many other workers, with momentum growing around the country.

Starbucks Corporation is known for its “progressive” image and liberal corporate values—with wages slightly above industry standards and some benefits like healthcare for part-time employees and tuition assistance. Still, a career at Starbucks is far from the “American Dream.” No company will voluntarily share power with its workers, even when it calls them “partners.”

For Starbucks workers, union organizing is about gaining greater control over their working conditions. As one Tallahassee worker put it, “They don’t trust our input despite the fact that we’re the ones there every day.” Struggles for workers’ control can lead to revolutionary conclusions about who really should run the economy.

Starbucks has engaged in typical union-busting behaviors since the first rumblings of organizing. This is not surprising, considering that the original Starbucks union in Seattle was broken in the late 1980s. Today, they are sending executives and anti-union consultants to stores, and using all the tricks up their sleeves to divide the workers and attempt to skew votes.

All of this has had the opposite of the intended effect and is pushing more workers to organize in the face of what they see as corporate hypocrisy. To quote a statement by one organizing committee, “We are outraged that partners you claim to care so deeply about are being mistreated, gaslighted, and harassed in their own stores due to your union-busting efforts.”

The capitalist crisis and the pandemic are pushing workers towards class struggle. Inflation topped 7% in 2021, with most workers experiencing a de facto pay cut. Essential-worker “hero pay” came and went in the early days of the pandemic, leaving workers feeling disposable and at the mercy of those in power. Workers were looking for a way out, putting union action into the spotlight as a means of fighting back, with waves of strikes in October that continued throughout the year. This is the backdrop to the ongoing struggle at Starbucks.

Retail, fast food, and other service workers have been tough to organize for decades. High staff turnover and at-will hiring and firing make organizing difficult. In addition, food service workers come disproportionately from the most oppressed layers of the working class, especially undocumented and formerly incarcerated workers. Faced with isolated unionizing efforts, franchise owners or corporations can close individual stores. However, this would be impractical for an entire chain or all stores in an area.

Since Striketober, it is clear that labor’s situation has changed, but total work stoppages in 2021 were still relatively low. Decade on decade, the total number of workdays lost to strike action has declined steeply. Strikes are the only sure way to hit the bosses where it hurts, and historically, strikes meant that all activity at a workplace ground to a halt. This fundamental power of a union has been severely undermined, and effective strike action has been restricted by law and punished harshly. It’s clear that the legal cards are heavily stacked against the workers. So what have the union leaders done in response?

The present labor leadership is primarily concerned with maintaining a stable dues base and is averse to taking risks. Instead of independent action based on the working class, they have relied on the most blatant class collaboration. Union efforts to stop the onslaught against the workers have been limited to campaigning for the Democratic Party, hoping it will pass legislation like the PRO Act. In 2020, SEIU gave $150 million of its members’ money to support candidates in the same party that represents Jeff Bezos and Howard Schultz! This has proven to be a dead end. After 30 years, union membership has sharply declined.

SEIU is the country’s second-largest union and is the parent organization of Starbucks Workers United. The SEIU leadership’s track record is checkered at best, and its class-collaborationist policies only serve to weaken the movement. As Starbucks workers join the growing unionization effort with Workers United, new locals should push for accountability, a democratic process, transparency of union funds, and political and organizational class independence.

To bring Schultz and his Fortune 500 company to the table and force them to sign a favorable contract will take a widespread, prolonged, and creative struggle. Starbucks has 9,000 stores and 6,500 more franchise units, each of which it will defend stubbornly from unionization. Its $29 billion in assets and $6.5 billion in cash will be mobilized to hire an army of scabs and lawyers to protect its profits. Starbucks workers will need to raise new leaders from their own ranks, fighters who will be well placed to mobilize thousands through mass, militant organizing that extends to the entire sector.

A successful unionization drive at Starbucks would be a spark of inspiration for workers everywhere and would do wonders to turn the labor movement around. Labor has the power to support such a movement. The strike wave that began last year is carrying over to 2022, and discontent is growing as the Democrats’ popularity sinks. Now is the time for the labor movement to mobilize.

Instead of wasting members’ dues to fund Democratic Politicians, the AFL-CIO and SEIU should use the resources to organize workplaces and build a party of the working class. Unionization drives would greatly benefit from a workers’ to help generalize the struggle across the country. A working-class party with a socialist program would draw together every layer of the workers and oppressed to support the many struggles that lie ahead. An organization like this could beat Starbucks and, in time, the whole rotten capitalist system.

If you agree with this perspective, contact us to get involved with the International Marxist Tendency!