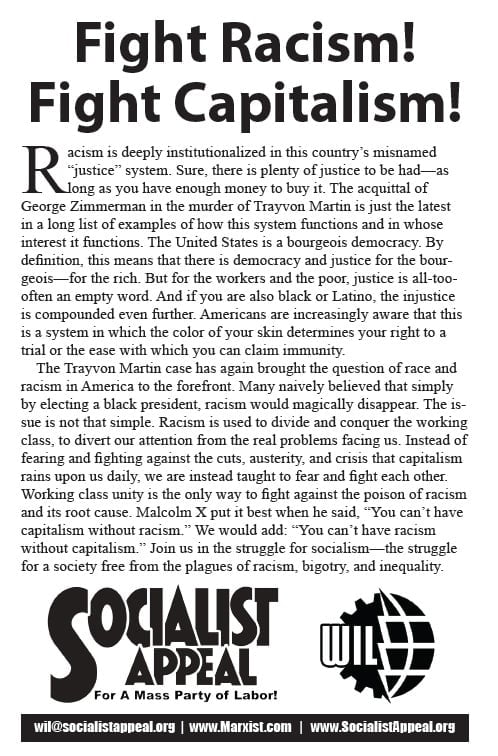 Racism is deeply institutionalized in this country’s misnamed “justice” system. Sure, there is plenty of justice to be had—as long as you have enough money to buy it. The acquittal of George Zimmerman in the murder of Trayvon Martin is just the latest in a long list of examples of how this system functions and in whose interest it functions. The United States is a bourgeois democracy. By definition, this means that there is democracy and justice for the bourgeois—for the rich. But for the workers and the poor, justice is all-too-often an empty word. And if you are also black or Latino, the injustice is compounded even further. Americans are increasingly aware that this is a system in which the color of your skin determines your right to a trial or the ease with which you can claim immunity.

The Trayvon Martin case has again brought the question of race and racism in America to the forefront. Many naively believed that simply by electing a black president, racism would magically disappear. The issue is not that simple. Racism is used to divide and conquer the working class, to divert our attention from the real problems facing us. Instead of fearing and fighting against the cuts, austerity, and crisis that capitalism rains upon us daily, we are instead taught to fear and fight each other. Working class unity is the only way to fight against the poison of racism and its root cause. Malcolm X put it best when he said, “You can’t have capitalism without racism.” We would add: “You can’t have racism without capitalism.” Join us in the struggle for socialism—the struggle for a society free from the plagues of racism, bigotry, and inequality.