[Leaflet] Immediate Unconditional Legalization for All! 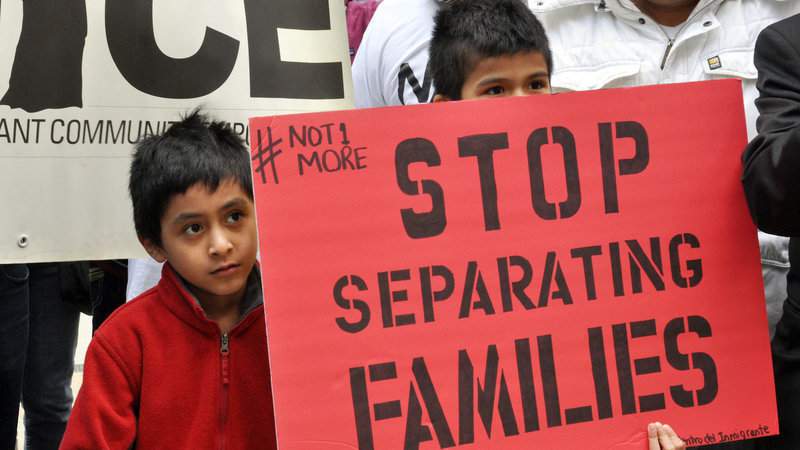 This is the text of a leaflet distributed by supporters of Socialist Revolution throughout the country. Download the PDF version of the two-sided foldable leaflet here.

The scenes of children being separated from their parents and caged inside ICE detention centers around the country have shocked and enraged millions of working people who can identify with the struggle to provide a roof and put food on the table for their loved ones. Thousands of children are locked inside such facilities. Toys and books are withheld, play is discouraged, and they are deprived of all human contact.

While Trump has doubled down in defense of his “deportation force,” calling for immigrants and asylum seekers to be deported without a court hearing, thousands of workers and youth across the country have had enough and are taking part in marches and protests to fight against these brutal policies.

The “Deportation Force” is Bipartisan!

Democrats have been cynically joined by the “moderate” wing of Republicans in the rush to denounce the cruelty of Trump’s latest attacks. In reality, these brutal policies are only a continuation of Barack Obama’s. Trump’s Democratic predecessor expanded and fortified the deportation force during his eight-year administration, earning the nickname “The Deporter in Chief.” Obama presided over the expulsion of three million undocumented immigrants—more than any president in US history. In 2011, there were an average of 771 weekly ICE arrests, including a five-day national raid that led to the arrest of nearly 3,000 undocumented workers—the vast majority of whom had no criminal convictions and were not accused of anything beyond “illegal entry.”

The intentionally cruel and violent methods of the government’s deportation force are also nothing new. An ACLU report of a 2009–2014 investigation of ICE and the US Border Patrol under Obama details the widespread verbal, physical, sexual, and medical abuse of detainees, including minors—with the same activities resurfacing in a 2017 Department of Homeland Security internal review.

American capitalism requires immigrant labor. By keeping the wages of these workers low, they can drive down wages and conditions across the board, and have the further benefit of being able to scapegoat immigrants for “stealing jobs.” Employers enjoy a cheap pool of labor, while the ready menace of targeted state repression ensures it remains cheap. This divide-and-conquer strategy is not new. The capitalists have used racism and discrimination to perpetuate their system for centuries. What they fear most is a united working class conscious of the fact that through militant struggle, they can fight the bosses and win.

What will it take to #AbolishICE?

In the face of such horrific repression on the border, many are looking to take direct action, primarily targeting Immigration and Customs Enforcement—the nationwide detention and deportation apparatus set up in 2003 as part of GW Bush’s Department of Homeland Security. But the question we must ask is what kind of movement will be required to actually put an end to the brutal deportations and family separations?

Many are rallying around the slogan #AbolishICE to call for the closure of the agency that enforces the capitalists’ merciless immigration law.But the repression and militarization on the border goes far beyond this individual agency. There are 43.3 million immigrants living in the US, both documented and undocumented, working in millions of workplaces side by side with workers of all backgrounds. The arbitrary distinction between those who are “authorized” or “unauthorized” by the state is destined to be swept aside in the course of the class struggle.

Socialist Revolution supports collectively fighting to stop ICE, but we say we must abolish the entire network of repression that includes ICE and kick the capitalists from the saddle of state power altogether. Otherwise “abolishing” ICE will merely transfer its work to another appendage of the state. The entire state and legal framework of capitalist rule must be replaced by a workers’ government and state.

Though the labor leadership has moved far to the right over the last period and resigned itself to Trump’s attacks, the unions nevertheless have a key role to play in fighting for all workers. The labor movement must fight for class unity and genuine equality for all, no matter where they were born, guided by the principle that an injury to one is an injury to all.

The International Marxist Tendency fights for the immediate and unconditional legalization of all undocumented immigrants, full rights and amnesty for immigrant workers and their families, and an end to all racist immigration and asylum controls, not to mention, quality jobs, healthcare, education, and housing for all. We will fund all of this by expropriating big business under workers’ control while dismantling of the capitalist state, including ICE, Border Patrol, the police, detention centers, prisons, etc. This is the kind of program that can arm the labor movement for the struggles ahead and transform it into an unstoppable force!

Even before the crisis of 2008 and the outbreak of the Occupy movement in 2011, the first major harbinger of a new epoch of class struggle was the militant wave of May Day demonstrations in 2006, when hundreds of thousands of documented and undocumented immigrant workers took to the streets in cities across the country to demand basic rights and dignity. The millions who fought twelve years ago fought for amnesty and legalization for all, for the free movement of people and labor. This kind of mass struggle is the way forward for the movement today.

For a time, the mass upsurge got out of the control of the Democrats and NGOs—which terrified them. Its defeat was finally accomplished when Democratic Party “progressives” like Keith Ellison succeeded in derailing the movement into the cynical theater of the two capitalist parties. Today, something similar is underway, as the Democrats try to assert control over the movement from the beginning, indicated by the likes of Kamala Harris and Mark Pocan publicly attacking ICE as an agency. A new mass workers’ movement uniting all workers—both immigrant and US-born—could reanimate the demand for universal amnesty and legalization, but only if it does not repeat the mistake of opening the door to the Democratic arm of the imperialists’ two-party system. Instead we must fight for a mass socialist party in order to take on the capitalists at the polls and in the streets!

A widespread mood of defiance is already palpable at the mass demonstrations that have swept the country since Trump’s election, and an explosion of the movement beyond the proportions of 2006 is inevitable at a certain stage. The outlook of revolutionary Marxism is guided by confidence in the historic power of the working class and a grasp of the deeper process which is unfolding: The molecular process of revolution. Join us in the fight for socialism in our lifetime!

For immediate and unconditional legalization for all workers!
For family reunification and an immediate end to deportations!
For mass workers’ struggle—an injury to one is an injury to all!