[Leaflet] No Environmental Solution Under Capitalism 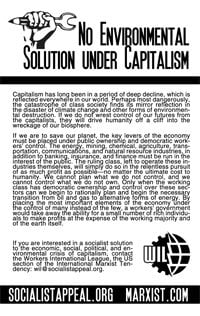 Capitalism has long been in a period of deep decline, which is reflected everywhere in our world. Perhaps most dangerously, the catastrophe of class society finds its mirror reflection in the disaster of climate change and other forms of environmental destruction. If we do not wrest control of our futures from the capitalists, they will drive humanity off a cliff into the wreckage of our biosphere.

If we are to save our planet, the key levers of the economy must be placed under public ownership and democratic workers’ control. The energy, mining, chemical, agriculture, transportation, communications, and natural resource industries, in addition to banking, insurance, and finance must be run in the interest of the public. The ruling class, left to operate these industries themselves, will simply do so in the relentless pursuit of as much profit as possible—no matter the ultimate cost to humanity. We cannot plan what we do not control, and we cannot control what we do not own. Only when the working class has democratic ownership and control over these sectors can we begin to rationally plan and begin the necessary transition from oil and gas to alternative forms of energy. By placing the most important elements of the economy under the control of many instead of the few, a workers’ government would take away the ability for a small number of rich individuals to make profits at the expense of the working majority and of the earth itself.