Marxist University Off to a Phenomenal Start! 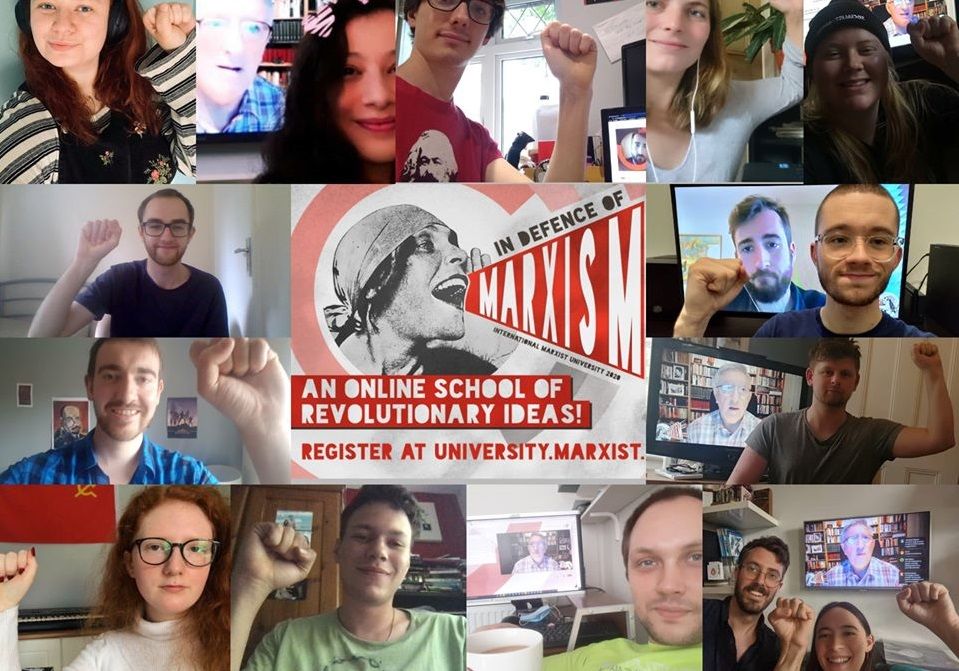 Image: In Defence Of Marxism

The International Marxist University 2020 is at the halfway point. More than 6,000 people registered to attend from over 115 countries, and hundreds of thousands of euros have been raised in donations so far for the cause of international socialism. There’s still time to join in: click here to register!

We have had two days of excellent online discussions on the theory and method of Marxism, covering the state of world politics, postmodernism, the crisis of capitalism, modern science and more. By every measure, the school has been an incredible success!

This school has been a material testament to the spirit of revolutionary internationalism and Bolshevik sacrifice! Live translation has been provided in 13 different languages, including all the main European languages, but also Urdu/Hindi, Chinese, Macedonian, Arabic, and Serbo-Croatian. The school has required an organizational team of 150 comrades to put together and manage. The sheer volume of work and dedication behind this event is evident.

Even to attend, participants have devoted a considerable amount of time, in many cases having to temporarily alter their sleeping schedules. Where it has been possible and safe to do so, attendees have met up locally to watch the sessions together, sharing images of themselves watching the discussions all around the world. Such was the response on social media that #MarxistUniveristy, #IMU, and #IMU2020 started trending in a number of countries.

More of our comrades from all over the world watching #marxistuniversity sessions together today! #imu2020 #imu…

It is impossible to not be struck by the scale of the school and the enthusiasm that surrounds it. The revolutionary energy is palpable, even people are not meeting face to face. As Pixie Flodhammar, a participant from Sweden, put it:

This online event is very different from meeting in real life, but being online means that more can participate, and this is a hugely positive thing for the building of a revolutionary international. The huge interest shows that workers and youth want theory that can guide real change!

From a world on fire to a world of revolutionary ideas

On the first day, we discussed the global situation, introduced by Alan Woods: editor of marxist.com. As Alan explained, it is clear we are living in unparalleled times. Capitalism is in a catastrophic crisis, triggered by the global pandemic. The coronavirus is ravaging the earth, and the system has exposed itself as completely incapable of protecting lives. The ruling class has never been so transparently monstrous and parasitic, and at the same time so divided and lacking control over the situation. The revolutionary implications of the global scenario are clear. As Alan put it: “in order for people to live, capitalism must die.”

A record financial collection was also held on the first day, which raised over €220,000 (so far)—a clear illustration of the sacrifices comrades and sympathizers are willing to make in order to build the forces of revolutionary Marxism. As John Peterson, editor of the US Marxist website, socialistrevolution.org said: “we put our money where our mouth is!”

Six sessions were held on the second day, covering the topics of Marxist economics, the crisis of reformism; dialectical materialism and modern science; the environment; sectarianism and postmodernism. All provoked fruitful and lively discussions, with valuable contributions from a number of experienced activists.

The theme uniting every session has been the need to defend the ideas of Marxism from all forms of slander and revisionism, and to use them as the foundation to fight for a socialist alternative to the rotten capitalist system.

Ben Curry from the Marxist organization Socialist Appeal in Britain, speaking on science and philosophy, showed how bad ideas lead to reactionary practice: like the bourgeois application of genetics to justify racism and oppression. Similarly, Daniel Morley (also from Socialist Appeal) showed how postmodernism strives to drown the radical energy of workers and youth—particularly on university campuses—in a quagmire of obscure, pessimistic nonsense.

By contrast, the revolutionary philosophy of Marxism is the only set of ideas with the capacity to transform society and liberate billions of people from poverty and misery. And time is short! Jack Halinski-Fitzpatrick, from Wellred Books, who led the discussion on climate change, explained that capitalism has become an existential threat to human civilization.

Fortunately, the mood of radical optimism on display at Marxist University is a testament to workers and youth worldwide reaching out for a real solution. More and more people are recognizing that the vital task of overthrowing capitalism and building a socialist society is the only thing worth striving for in 2020 and beyond.

Today’s sessions will begin at 13:00 BST, with three parallel sessions, including defenses of Marxist economics and historical materialism, and a discussion about anarchism. Later, at 17:30 BST, we will have talks on identity politics, the history of our organization (the International Marxist Tendency) and postcolonialism. Register now and take part in the rest of the school!