Mass Protests Against Police Violence Sweep the US 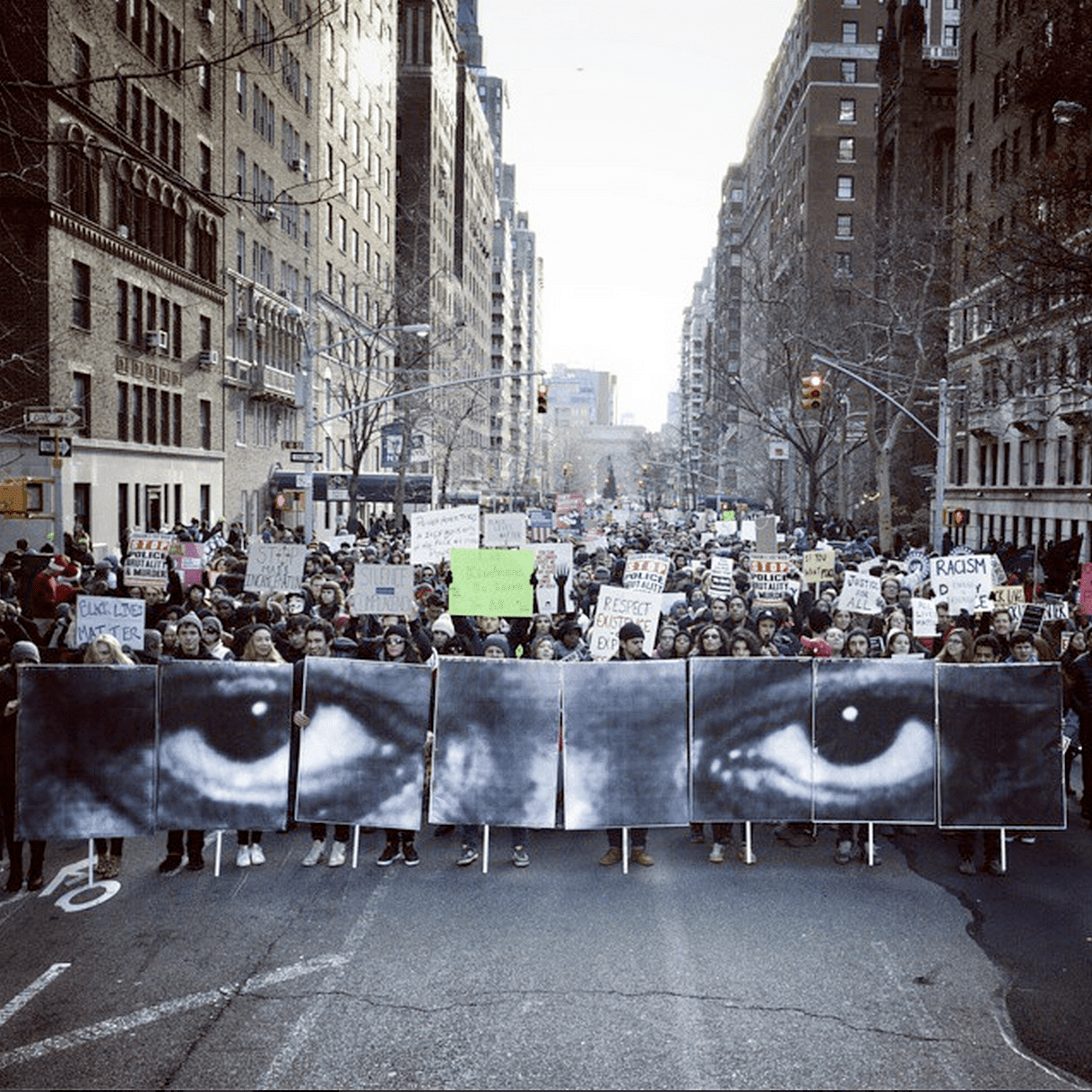 A grassroots upsurge has swept the US over the past few weeks, its sudden eruption marked by huge weekend marches on the East Coast and by smaller, broadly based protests across the length and breadth of the country.

Prompted by public outrage over the August 9 police street killing of Michael Brown in Ferguson, Missouri; the strangling death of Eric Garner last July at the hands of a squad of New York City police officers; and the failure of prosecutors to secure indictments and public trials for the involved officers through the increasingly discredited grand jury system, the protests have popped the lid off a widespread, simmering popular discontent and given it focus.

According to organizers, some 50–60,000 people coursed through the streets of New York City Saturday in the “Millions March” action—organized almost exclusively through social media—in the largest outpouring so far in the nationwide wave of protests against the daily police violence meted out to black workers and youth, and its de facto legal justification by institutions of government at all levels.

In the nation’s capital, Washington, DC, an estimated 40–50,000 protestors responded to the call by Reverend Al Sharpton’s “National Action Network” for a “Justice for All” march and rally. Rally organizers had anticipated an attendance one-tenth that size.

Thousands more marched and rallied in Boston, San Francisco, and many points in between.

The protest movement has burst through every pore of US society. An uncounted multitude of smaller marches and “die-ins” have broken out in cities, towns, and neighborhoods throughout the country, activating a population that had been largely quiescent in the face of daily acts of police violence and the grinding decay of working class living standards through the “recovery” from the “Great Recession” of 2008.

Celebrities and sports figures have staged public displays of protest. NBA basketball players have warmed up before games wearing “I Can’t Breathe” t-shirts. TV personalities have performed “hands up” protest demonstrations on the air. Even staffers for US Congress representatives walked out last week in a public show of solidarity.

“Black Lives Matter” and “Hands Up, Don’t Shoot!” have been among the most popular signs and chants in all the protests. 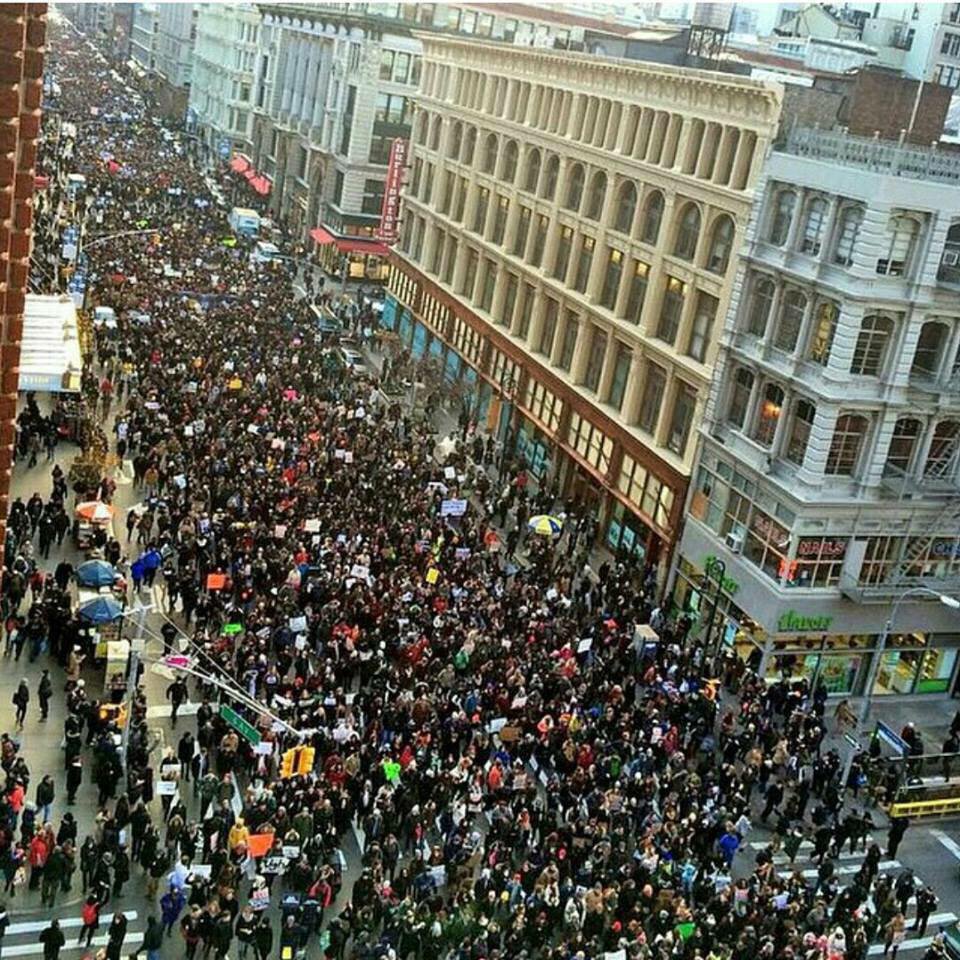 Remarkable in this wave of protests has been the sudden, practically universal activation of high school students in Denver CO, Elgin IL, and elsewhere around the US. Organized protest walkouts have been seen in many localities, in most cases meeting the vocal support of teachers and school administrators.

Equally remarkable has been the lack of leadership shown by union officials. Although a few mild statements of protest have been issued by leaders of public sector unions such as AFSCME and AFGE, most have remained silent. AFL-CIO President Richard Trumka gave a speech to the September convention of the Missouri union federation which, although sympathizing with the fight against racism, abstained from mobilizing union resources to take a lead in organizing a fight back.

On the streets, police have had decades of experience brutalizing working-class detainees, especially black and Latino victims. This practice performs the dual role of intimidating and disciplining workers, on the one hand, and on the other, of acclimating police officers to the dirty job of suppressing the mass strikes and urban rebellions that the ruling class knows are just over the horizon.

In most cases thus far, though, police forces have been restrained in their handling of this recent upsurge in protest out of fear of the backlash a crackdown would cause. Even the NYPD has been restrained, despite excessive police presence throughout many potential protest areas of NYC and their use a week ago of an LRAD on protesters (a sonic weapon originally designed for military purposes).

One glaring exception has been what has been described as a “police riot” by Berkeley, CA police to a march and rally last week where an undercover police provocateur was outed just days later. No cohesive national protest organization has emerged so far, and no concrete set of demands has yet to capture public attention. The pretension to leadership of middle-class figures like Reverend Sharpton has been challenged in action by fresh young forces who have stepped forward.

This wave of protest has tapped into a deep well of discontent in the US, and shows signs of maintaining its vigor in the immediate period ahead. As the numbers involved surge forward and then recede once again, thousands more US workers and youth will be left seeking answers to the big question of how to effectively and collectively change society.