Massive General Strike in Belgium: Nothing Moved By Air, By Road, or By Water

“This is the strongest strike ever,” commented General Secretary Marie Hélène Ska of the Christian union CSC. She is right. The national work stoppage on Monday, December 15 was without doubt the most “general” of 24-hour general strikes in the rich Belgian history of strikes. 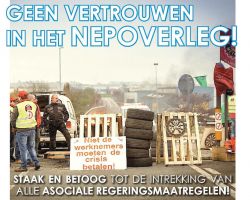 It was the culmination of six weeks of intense struggle which started with a massive demonstration of 120,000 workers in Brussels followed by 3 regional strikes. The workers oppose the reactionary policies of the most right-wing federal government since the Second World War.

This government is composed of the right-wing Flemish nationalists of N-VA, the liberal parties of both language regions, and the Flemish Christian Democratic Party. Its agenda and methods are clearly inspired by Thatcherism, and it is clearly determined for an open confrontation with the workers movement.

Both Flemish and French Socialist Parties, in power for a quarter of a century, have been ousted from the federal government. The government measures include the increase of retirement age to 67 years, the end of the early retirement schemes, an “index jump” (not applying the sliding scale of wages), a wage freeze, and many more attacks which represent dynamite in the Belgian social system. 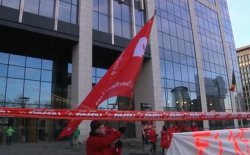 Just one “index jump” will cost a worker 30 years of age some 30,000 euros by the end of his or her career. The new system for pensions for public service workers will represent a monthly net loss of between 100 and 200 euros. Some will lose up to 450 euros net a month. Sick unemployed workers will lose up to 269 euros a month. These attacks are not new. A large-scale austerity policy was already launched by the previous government, led by the Socialist Prime Minister Elio Di Rupo. But the policy of the first homogeneous right-wing government in 25 years has brutally accelerated the rhythm and the scope of the pro-bosses agenda.

The most “general” of general strikes

On December 15, nothing moved by air, water, or road. The port pilots crossed their arms already at 5 p.m. on Sunday, making all movements into or out of the harbors impossible. A few hours earlier the Dutch navigation authorities had sealed off all traffic to the seaport of Antwerp for “security reasons,” extending the 24-hour strike to a de facto 48-hour strike.

All traffic on the canals came also to a standstill. Then the 10,000 dockworkers of Gent, Zeebrugge, and Antwerp halted work. No one worked. At 10 p.m. the air traffic controllers sealed off the airspace above Belgium for all civil transport. At the same time all train traffic was paralyzed for a full day. Not one of the 3,800 trains transporting 750,000 commuters every day moved.

On Monday morning all public transport, i.e., trams, busses, and metro, stayed in the depots. The truckers unions had also called for participation in the general strike, and with success. Very few trucks were seen on the roads. All economic sectors were paralyzed or working at a minimum level. The largest petrochemical cluster in Europe, based in the port of Antwerp, was hermetically sealed by union blockades. The same happened with public services, schools, the main shops and banks.

Even the National Bank of Belgium was on strike. Some cities looked deserted. General traffic in the country was comparable to a Sunday at 7 a.m. The united front of the three unions, the socialist ABVV/FGTB, the Christian ACV/CSC, and the liberal ACLVB/CGSLB also set up blockades of all industrial zones and of the main roads leading to them. This tactic is necessary to help workers in small and medium-sized companies without union presence to be able to participate in the strike.

Significant is the development of a movement bringing together the cultural workers, artists, etc. with the unions in a front called Hart Boven Hard/Tout Autre Chose. At their initiative, flying cycling pickets were organized. In Antwerp 1,000 people participated in such cycling pickets. Many artists and singers have not only expressed their solidarity but are composing songs, etc., reminiscent of a tradition of the early years of the workers’ movement or during the high points of the class struggle in the past.

Symptomatic is also the fact that different schools, like the ones training future social workers, have organized “teach-ins” during the strike on broader social and political themes.

Important also is the very even spread and intensity of the strike movement on both sides of the language border. The right-wing Flemish nationalist thesis, which presents Belgium as a country of two different democracies, one Flemish democracy and a French democracy, is being rejected by the workers’ movement.

In reality this working class movement is revealing two other “democracies” in Belgium, namely, one of the rich and another one of the workers and the poor. During the three regional strikes previous to the national strike of December 15, two Flemish provinces and two French provinces stopped each time the same day.

In the city of Antwerp, led by the reactionary mayor of the N-VA, Bart De Wever, the regional strike was very impressive. Antwerp was a union town again. In another Flemish province, Oost Vlaanderen, 500 picket lines were formed in front of factories, involving a total of 8,000 workers. Never has a strike involved so many factories in that province.

Students have also supported the strike of the workers, especially since the government has increased the tuition fees by 50%. The students were actually the first to protest in the streets. The class struggle is clearly cutting through many years of nationalist and divisive propaganda. Through this movement the working class is becoming conscious again of its existence as a separate social class with common interests independent of language or national origin.

The scope of the general strike has shown how, despite mass unemployment, precarious work, outsourcing etc., the working class continues to develop as a mighty force once it starts to move.

But the actual movement is much more than a union movement against cuts and austerity. On the picket lines, workers first start to complain about the general conditions of work before they talk about the government measures. A more general questioning of capitalist society is permeating the strike movement.

At the same time the strike is a backlash against all concessions and retreats imposed on them by the bosses and accepted by the union leaders and many shop stewards. “We won’t pay for their crisis any more” is becoming a common reaction among workers. It is no accident that the demand for a “wealth tax” has the support of 85% of the Flemish population.

Even more than 70 % of the voters of the right-wing N-VA favor this demand. In a country where 12,000 new millionaires were added last year, where rich CEOs and company owners literally pay less taxes than their driver or house cleaner, this demand has gained great popularity.

It is also the main programmatic demand of the small but growing Workers Party of Belgium. In itself a wealth tax will not, of course, end austerity or the crisis of capitalism. The Socialist Parties (Flemish and French) have great difficulties adapting to the opposition. Although they formally support the unions, they lack legitimacy in the eyes of many advanced workers in particular. Especially because the Walloon regional government led by the Socialist Party is involved in similar policies.

The government tried to intimidate workers by mobilizing the entire police force of 12,000 officers, including 500 police students. In Antwerp the state even asked for help from the police in Holland, which lent them 17 police vans. It is a moving show of the solidarity between two repressive apparatus . . .

Actually, the warlike language of the minister of the interior against the unions had a boomerang effect and helped to strengthen the determination of the workers. At the same time it pushed workers to think about what has happened to the so-much-praised Belgian model of social consent.

For many people the sharp social and political polarization, the refusal of the government to negotiate with the unions, the massive police mobilization, seems so “unBelgian”! Actually this idea of sharp class struggle being “unBelgian” is based on the ignorance of the history of the workers’ movement. Since the 19th century the country has known many general strikes, the most famous one being the 35-day-long general strike in the winter of 1960 and 61 (see video http://vimeo.com/18715456 ).

In fact this tendency of the hardening of social relations, the policy of deliberate confrontation with the workers and the unions in particular on the shop floor, and the de facto abandoning of policies of social consent started many years ago. The material base for this tendency is, of course, the crisis of capitalism.

The dependence of the Belgian economy on exports only adds to the development. It takes time for workers to take stock of and to draw all the necessary political conclusions. Those who have the most difficulty understanding this process are, of course, the leaders of the unions. They continue to cling desperately to the mechanisms of negotiations and naïvely hope for “win-win” solutions. In reality, they live in the past.

The government and the bosses are not ready to give in, but would like to neutralize the union leaders through a pantomime of negotiations, a kind of shadow-play of social dialogue. But many workers on the picket lines, including some union leaders, do not have illusions in this “social dialogue.” They know it is trap, and want to continue to strike “until the finish” of the fall of the government.

Several unions have already called for the continuation of the strikes and demonstrations. A new general strike could be on the agenda in January or February 2015. The unwritten social armistice will be short lived. The 6 weeks of social turmoil is also having a dramatic political effect.

Only 20% of the population gives its support to the government, the lowest score of any government since this type of poll has existed in Belgium. In Flanders, the government parties are losing 11% of their support. The Flemish Christian Democratic Party, the only party in government with ties to the workers movement, via the Christian union, is under severe pressure. One-fifth of its voters say they regret their vote.

Political opinions and attitudes are changing rapidly in actual conditions. This makes the situation in Belgium very explosive.