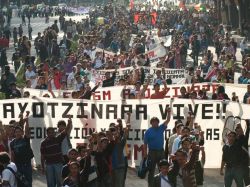 Yesterday hundreds of thousands marched in Mexico city and tens of thousands more in dozens of other cities across Mexico to protest at the kidnaping of 43 teacher students from Ayotzinapa. They were clear in pointing the finger squarely at the Mexican state. The actions were part of a widespread nationwide 48 hour student strike which continues today.

The march in Mexico city was one of the largests in recent times. The first group of marchers reached the enormous Zocalo Square at 7pm, having covered the 4 km route from the Angel de la Independencia. The last contingent made it to the square 4 hours later, at nearly 11pm.

Students across the country had voted for a 48 hour strike in mass assemblies. This was the second 48 hour students strike, following the call issued by the National Peoples’ Assembly, set up last week by the Ayotzinapa Rural Teacher Training College (Normal Rural), the democratic teachers’ union in the state of Guerrero CETEG and their allies.

The mood at the demonstration was extremely angry and also very political. The main target of the demonstrators rage was president Enrique Peña Nieto himself, whom they identify as responsible for the fact that nearly a full month after the students were kidnapped by the local police in Iguala, Guerrero, their whereabouts remain unknown. “Fuera Peña Nieto” (Peña Nieto Out) was one of the main slogans.

Students represented the main bulk of the demonstration. All of the campuses of the UAM, all of the faculties of the main university UNAM, the National Teacher Training University,but also from the smaller UACM, UACH, the private Ibero and others. The presence of the Polytechnic Institute, which has been on strike for almost a month now, was also significant, with contingents from its different schools numbering perhaps 10,000. This was a break with a certain prejudice against linking up its student strike with broader issues.

The kidnapping of the 43 Ayotzinapa students has brought sharply to the attention of millions of people the rottenness of the capitalist state in Mexico and its links with organised crime. A joke widely circulating in Mexico these days asks whether it is the drug cartels which have infiltrated the ruling PRI or the other way round. It doesn’t make a difference, and it is not only the PRI, but all of the main political parties.

Let us recall the facts: students from a teacher training college, known for their militancy, were attacked without prior warning by the local police of Iguala, Guerrero. Three of them were killed on the spot and another 23 injured. 3 other bystanders who were also killed. The surviving students were then chased and taken by the police from Iguala and nearby Cocula and then handed over to the guerreros unidos drug cartel. The motive seems to be that the local mayor of Iguala,  who is closely linked to the drug cartel, was afraid that the students were going to protest at a reception organised by his wife, who is also involved in politics and the cartel.

The state governor of Guerrero, Aguirre is also involved in the incident. He received reports of the attack as it was happening but did nothing. He then ordered the arrest of the mayor (who is also a political ally), but gave him enough time to escape (after attending a local council meeting in which he was officially given leave of absence!). Finally, the country’s president, Peña Nieto, did not really move a finger until the pressure from national and international public opinion became too strong. Five weeks after the kidnapping the investigation has not advanced an inch, despite the fact that 52 police officers have been arrested. The parents of the students have openly said; “they are looking for them, but only where they already know they are not”.

Just to give an indication of the level of state collusion in this case, the well respected human rights advocate and migrant rights defender priest Padre Solalinde, has declared publicly that people he trusts have told him that the missing students were burnt, some of them while still alive. He said he could not reveal his sources as this would endanger them, but on Monday, October 20 he went to the State Attorney’s Office (PGR) to make an official statement. Despite having a pre-arranged appointment, no-one received him and they would not even officially acknowledge receipt of a written statement.

The fact that the national government has been unable or unwilling to solve the case, probably points to links of patronage, owed favours, reciprocal blackmail and common interests between the perpetrators and those currently in power in Los Pinos.

The growing anger is not just about this particularly incident, horrifying as it is. This is just the last straw which has made the accumulated anger boil over. Anger at the tens of thousands of people killed in the futile “war on drugs”, at the collusion of politicians at all levels with criminal gangs, at the kidnapping and extortion of central american migrants by state forces and criminal gangs alike, at the killing with impunity of human rights, trade union, peasant and youth activists as a regular occurrence, widespread corruption and electoral fraud, etc.

“We are sick and tired, we’ve had enough of this damned corrupt government which makes men, women and children disappear” said one of the marchers, summing up the mood.

Now this horrific incident threatens to spark a national explosion which at least in Guerrero can acquire insurrectionary proportions. The National Peoples’ Assembly has threatened to take over each one of the state’s 81 municipalities and has said it only recognises the power of the Community Police, the community based self-defence organisations raised by ordinary people in order to defend themselves from the state and the criminal gangs.

At the end of a mass demonstration by 20,000 people in Iguala, the local town hall was set on fire. At the huge demonstration in Mexico City, parents of the disappeared students gave an ultimatum of 48 hours to the government to find their missing sons.

Already, a new 48 hour student strike has been called for next week. The UNT trade union has called for a 24 hour general strike for October 28. In Guerrero itself different groups of workers, including those at the UAG university, have already carried out work stoppages. About 1000 activists from the militant Oaxaca section 22 of the democratic teachers union CNTE, have gone to Guerrero to back their brothers and sisters in struggle.

The carefully constructed image of Peña Nieto as a “reformer” who had been able to carry out all the counter-reforms the capitalists require, smashing in its way any opposition, while bringing down the levels of violence and corruption, has been shattered by this movement.

As a matter of fact, the reason why Peña Nieto was able to carry through a whole series of attacks was mainly as a result of the different sections of the masses fighting in an isolated manner. Whenever there has been an attempt at a united struggle, for instance against the “opening up” of the oil industry (that is, its partial privatisation), the leadership has been found wanting and without a clear strategy, other than calling a series of consecutive mass demonstrations, one after the other, which had the effect of tiring out the movement. The leadership of Morena, the new left party around Lopez Obrador, seemed to be concerned only about its electoral strategy, which for them was completely separate from participating or giving a lead to any mass struggle.

In this case, the Morena leadership has come under criticism from its own ranks for not even issuing a clear statement in support of the students. In fact, it seems that one of Morena’s possible candidates in Guerrero had links to the Iguala mayor and has now been sacked by the state governor as health secretary. Finally, Lopez Obrador has called for his planned demonstration against oil privatisation on Sunday, October 26, to be turned into a protest for the Ayotzinapa students.

The difference between this and previous movements, as well as the accumulation of anger, has been the fact that someone has offered a clear leadership, in this case the students of the Normal Rural and their allies in the teachers’ movement and the community police force. As well as organising mass protests, direct action and civil disobedience in Guerrero, they made a clear call for a national student strike which then became an international day of protest.

If there was a proper leadership, this could be the beginning of the end of this reactionary government and even the beginning of a revolutionary process in this key country with proud traditions of struggle.