MN State Shutdown: Make the Rich Pay for Their Crisis! 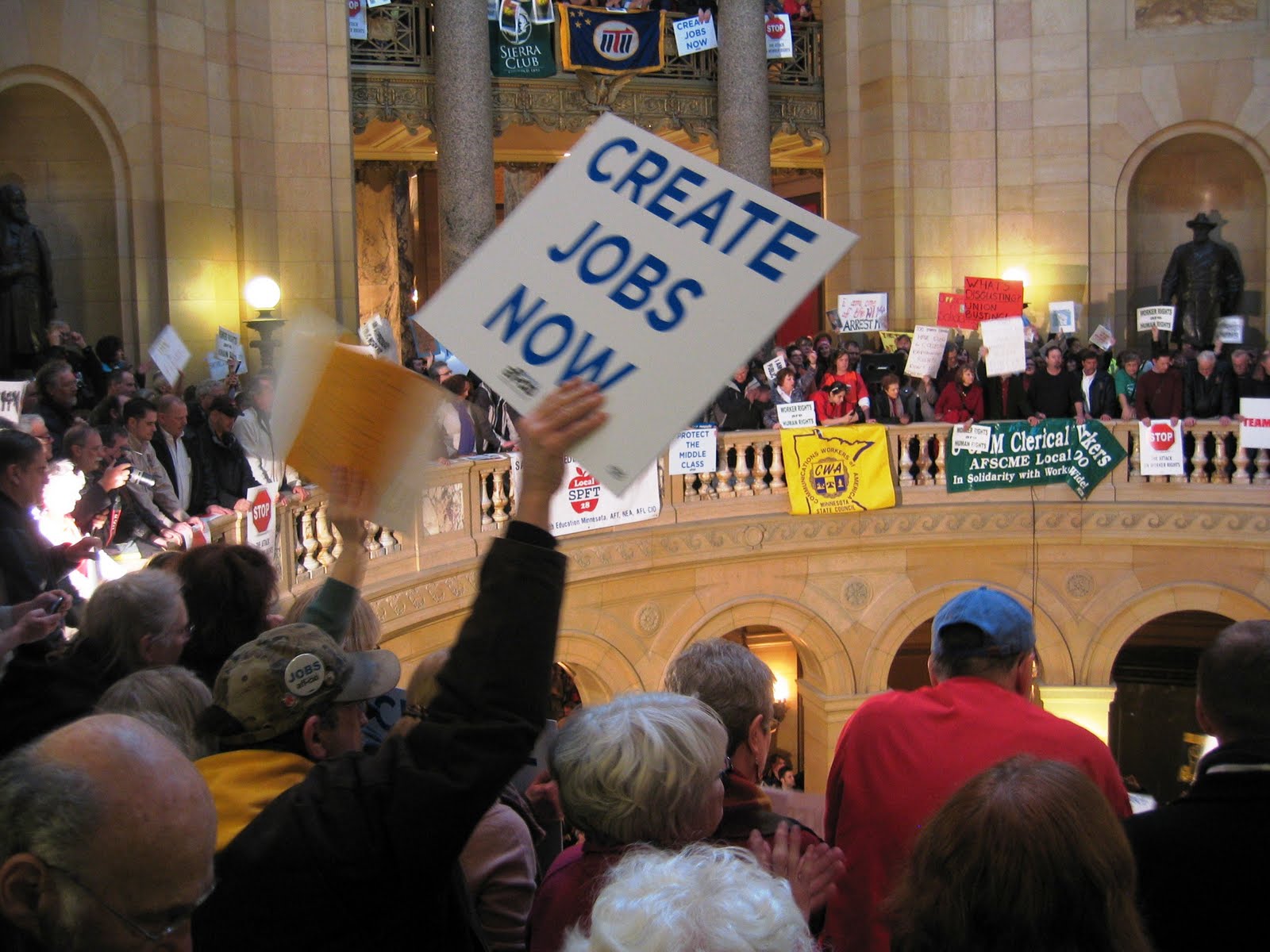 Many believed it wouldn’t actually happen, but the Minnesota state shutdown is here. The political game of chicken being played by the Republicans and Democrats over the budget has plunged the state into crisis. Tens of thousands have been laid off, increasing state-wide unemployment by 20% overnight, and thousands more are in danger of losing their jobs as funding for their programs dries up. Parks, rest areas, road construction projects, and essential health and human services that working and poor Minnesotans depend on have been indefinitely suspended.

The Campaign for a Mass Party of Labor (CMPL) is opposed to the shutting down of the government. In fact, far from supporting cuts and a shutdown, we believe government services need to be greatly expanded, starting with a multi-billion dollar program of useful public works to rebuild our state’s infrastructure and to provide everyone in Minnesota with a quality and stable job, at union pay and with full benefits and job protection.

The Democrats have proven impotent to stop the cuts-and-concessions steamroller or to prevent the government shutdown. They have stood meekly by while the Republicans bullied and threatened the workers and poor of this state, and limited the negotiations to back-room discussions veiled by a so-called “cone of silence.” Why not put all the proposals that are being discussed squarely on the table for all Minnesotans to see?

Governor Dayton has been praised for “standing strong” against the Republicans’ “draconian” cuts. But what about the over $1 billion in cuts and concessions he has already given them? Far from “investing in Minnesota,” the Governor is on track to make billions in cuts. Cuts are cuts, no matter which party they come from. Studies show that cuts do not lead to greater prosperity. In fact, states that have cut the most also have the worst economic situation. The CMPL is against any cuts or concessions that negatively affect workers, young people, or the poor, whether they come from the Republicans or the Democrats. State workers and working Minnesotans generally did not cause this crisis, why should we have to pay for it? Why should we have to settle for a “compromise” that means billions in cuts to education, health services, and more?

Minnesota is not a poor state. We have tremendous natural resources and a highly educated and productive workforce. But the bulk of the wealth is concentrated in just a few hands. The stunning fact is that those who make under $11,200 in the state pay 22.1% tax, while six billionaires in Minnesota average just 7.7% in taxes. The rich claim that making them pay more will lead to less investment and fewer jobs. But with tax rates so low already, where are the jobs? No wonder so many Minnesotans want to tax the richest 2% to cover the budget deficit! But we have to ask: who is going to pass such laws and enforce them?

If we follow the money, it is clear that both the Republicans and Democrats are parties of big business. No wonder working Americans are left out in the cold! The Democrats have stood by and enabled the rich to slowly chip away at our state’s world-famous high quality of life. The bipartisan actions of both parties over the past few decades, at both the state and national level, have led us to this situation.

For example, the biggest hole in the state budget is due to rising health care costs. If the Democratic Party nationally had fought for and passed genuine “Medicare for all” universal health care reform, these costs would not have to be shouldered by the states, and everyone would have access to health services. Disappointment with the lack of real change after the 2008 elections led many to abstain in 2010, or vote for “the other guy,” for lack of an alternative. Minnesota voters deserve better than a choice between “evil” and “lesser evil!” The rich will fight tooth and nail against any encroachment on their wealth and privileges. Minnesota workers need a party that will fight in our interests, and not make “compromises” with the Devil. Compromises = cuts and concessions.

For far too long, the unions have hung on to the coattails of the Democrats, giving them millions of dollars and getting out the vote for their candidates. In return, labor has received little except cuts, sell-outs and broken promises. No universal health care. No living wage. No Employee Free Choice Act. No repeal of anti-union laws like Taft-Hartley. No fully-funded state services.

It’s time to end this dysfunctional and unequal relationship once and for all. The labor leaders alone are in a position to do what they are there to do: lead the membership in a mass movement to fight against the cuts and against concessions. To counter the billionaires and their bought-and-paid-for politicians, lobbyists, and media, we need a mass movement of Minnesotans on the streets, at the Capitol, and organizing in the workplace and on the campuses.

The labor movement has tremendous resources and the capacity to mobilize hundreds of thousands of people. Imagine the possibilities if, instead of throwing that money down the black hole of the Democrats’ empty promises, we built a party of, by, and for working Minnesotans? The labor leaders must break with the parties of big business and build a party of our own: a mass party of labor based on the unions!

The “blame game” is in full swing, as both major parties cynically look toward 2012, while ordinary Minnesotans suffer from the effects of what is in effect a bosses’ lockout. We don’t need political maneuvering or secret negotiations from our representatives. We need elected representatives who are directly accountable and will fight for the people that elected them. Toward this end, the CMPL believes we need to start running independent labor candidates and lay the ground work for a state-wide Labor Party to fight in the interests of working Minnesotans. The rich have two parties: we need one of our own! Contact the CMPL for more information and to get involved.