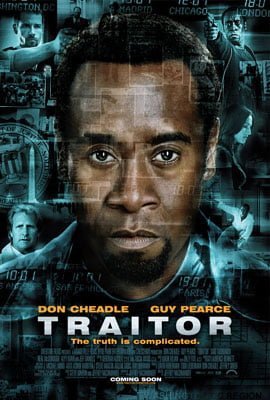 Anyone looking for a good movie about traitors can skip the new Don Cheadle vehicle Traitor.  Despite all the action movie hype, it won’t be around long, anyway.

Traitor is not a movie about traitors, or a sensitive post-mortem on why people might become “traitors.”  That old chestnut “The Man Without a Country”  is Tolstoy compared with this movie.

What Traitor does give us is a hymn to the bravery and self-sacrificing heroics of stool pigeons, snitches, spooks, and the FBI.  The FBI in this movie is not the FBI we all know and love; it is filled with men of daring, intelligence, and good sense.  A science fiction movie couldn’t be further from reality.  COINTELPRO?  Not in this universe!

Early on, the lead FBI agent (played by Guy Pearce) brags to his partner about growing up in the Deep South with a white minister for a father:  “Every time the Klan would burn a cross on someone’s lawn, he’d go out and help put out the fire.”  Such are the self-serving fantasies our rulers churn out.  (Does anyone remember the movie Mississippi Burning?  It did for the FBI what Pretty Woman did for prostitution.)

Traitor can’t hold a candle to the old Cold War traitor movies.  There was so much ruling class anxiety in movies like The Bamboo Prison (1954), The Rack (1955), and Time Limit (1957) that despite their reactionary line, they are still worth a look.

Martin Scorsese is our current poet laureate of traitors.  Nearly all his movies are about the horror (in every sense of the word) about being a traitor.  Take a look at The Departed (2006).  Every lead character is a traitor to himself and something else he holds dear: a lover, a group, an organization.  We’re happy they all die by the end of the movie — their suffering is over.

Being a traitor in films such a these is a close synonym to alienation in the classical Marxist sense.

Don Cheadle has a reputation for solidarity with Darfur.  Darfur is a region in  Africa and a word globalization activists are  not afraid to wear on a T-shirt.  It is a place only mentioned when humanitarian cover is required for the use of U.S. military power.

In Traitor Cheadle plays a devout Muslim born in Africa and raised in Chicago.  Being upset that ‘extremists’ and ‘terrorists’ are betraying the Koran, he decides to join forces with that great lesser-evil, the USA.  Jeff Daniels has a few good scenes as his creep of a boss, the kind of “intelligence” genius who’d rather burn down the world with us inside  than admit terrorism is blowback from decades of Washington’s policies.  (Cheadle is scheduled to play Toussaint L’Ouverture in Danny Glover’s upcoming film about that great revolutionary.  Jeff Daniels will be playing Dave Dellinger in the 2009 Paul Greengrass release The Trial of the Chicago Seven.  We have been warned.)

The fine French actor Said Taghmaoui plays lead terrorist Omar, duped by Cheadle into making him part of his plans.  One of Taghmaoui’s scenes shows how easy it is for an Arab to cross the U.S.-Mexican border – apparently they all look alike  to Homeland Security.

It’s hard not to feel anger or contempt at the type-casting an actor like Said Taghmaoui suffers from.  His career so far reminds me of the careers of  Asian-American actors back in the 1940s.  A talented man like Richard Loo could play the commandant of the Japanese POW camp in The Purple Heart (1944), or Hirohito in Star-Spangled Rhythm (1942), or a chauffeur, but that was it.  Taghmaoui is well-known already from Sleeper Cell and Kite Runner, and has a leading role in the upcoming UK miniseries House of Saddam. But  I think it is unlikely we’ll see him playing James Bond’s new boss or the love interest in the next Renée Zellweger masterpiece.

Traitor’s “social role” broadly speaking is to sooth and lull qualms about how Washington’s rulers go about “protecting” us.  Rest assured, the world of  Traitor  is not contaminated with orange jumpsuits or military tribunals or collateral damage.  The good guys are sensitive, compassionate, and  respect Islam enough to study the Koran.