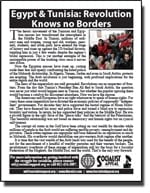 New leaflet produced by Socialist Appeal for use at events in solidarity with the Egyptian and Tunisian revolutions.  Print copies and distribute widely .  The heroic movement of the Tunisian and Egyptian masses has transformed the atmosphere in the Middle East. In Tunisia, millions of ordinary men and women, young and old, workers, peasants, students, and urban poor, have entered the stage of history and risen up against the US-backed dictator, toppling him in just a few weeks despite the regime’s brutal repression. This is yet another example of the unstoppable power of the working class once it moves into action.